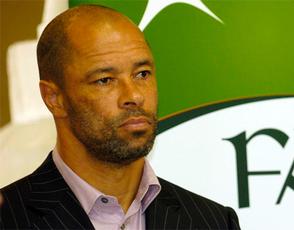 From an Irish perspective, the biggest fallout from yesterday's United-Liverpool match seems to be who was drunk and who wasn't. Anyone who ventured onto Paul McGrath's Twitter account last night will have noticed that the Ireland legend was not his usual articulate self while engaging with his followers.

It started with a strange tweet to himself at 3am on Saturday night/Sunday morning. A confusing tweet about Glen Johnson followed and McGrath spent most of yesterday dealing with abuse from trolls, some of whom were Liverpool supporters.

@paulmcgrath5 tk u lads and lassies so much x

Glen johnson know u didnt know who i was sorry my name is paul mcgrath think u might remember robin van persies name bad game son :-) 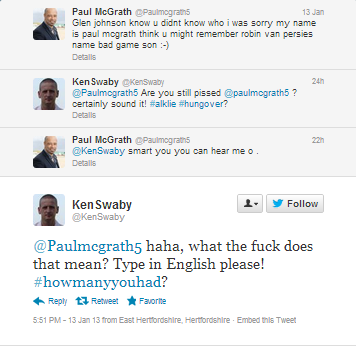 McGrath, whose battles with alcoholism are well-documented, also admitted to be drunk. 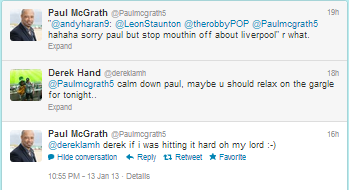 The 'Tubridy' production team - whose presenter would be very familiar with McGrath's demons -for some reason thought it was a good idea to put McGrath on the radio this morning to talk about his day dealing with Twitter trolls, oblivious, I guess, to the clear evidence of and concerned tweets at McGrath about his drinking.

The interview does not appear on the RTE radio player's playback of today's Tubridy show. (We'll spare you having to listen through the entire show - McGrath appeared between 9.40 and 10.00am though the interview has been cut from the playback - and the show itself is about 8 minutes shorter than the majority of Tubridy show podcasts.)

After the 10am news, Tubridy explained that they had put McGrath on air to have some 'banter' specifically about McGrath's day on Twitter on Sunday, and he, bizarrely, assured us that he would call McGrath on his own time to enquire into his well-being. He said on air that his team called McGrath around 8am and decided that he was fine to be interviewed.

Sad to hear Paul McGrath on the radio like that. Hope he can get help today. Bad form 2fm

Paul McGrath on Tubridy, obviously not well. Bad form 2fm for putting him on. Hope he gets the help he needs. Sad to hear him like that.

Anyone listening to Paul McGrath on the Ryan Tubridy show? He is all over the place. Thought he should have cut it. Made a fool of him

Update- we've been contacted by a reader who heard the interview on playback around midday, who said that even though it was completely obvious that McGrath was inebriated from the outset, Tubridy persisted with the interview, and the questioning quickly moved from football to the personal. McGrath admitted to have a difficult Christmas and to living on his own and not having anyone around to take care of him. He said he didn't like people, but loved Twitter, and talked about his sons fighting for England in Afghanistan and "your man up in Derry" not wearing the poppy, James McClean. It seemed like 5 minutes of radio on a Monday morning that nobody needed.

Pulling the McGrath interview from the internet seems to be an admission that putting McGrath on air was, in the very least, in bad taste.

McGrath has yet to tweet today. We wish him all the best and hope he stays off Twitter for awhile. The trolls often shout louder than the supportive people do.

Football
3 days ago
By Gary Connaughton
Gerard Pique Recalls Feeling The Wrath Of Roy Keane As A 17-Year Old At Man United
Football
3 days ago
By Gary Connaughton
A Ridiculous XI Of Ireland Players Who Never Played At A Major Tournament
Football
1 week ago
By Gary Connaughton
Zlatan Ibrahimovic Did Not Agree With Club's Alex Ferguson Obsession During United Spell
Popular on Balls
Rugby
1 day ago
By Colman Stanley
'I Think Munster Softened Them Up For Us': Sexton Not Carried Away After Clincial Leinster Win
GAA
2 days ago
By PJ Browne
Mayo's Padraig O'Hora Using Football To Promote His Real Passion
Rugby
15 hours ago
By Colman Stanley
'That Pace, That Intensity, That Organisation' All Black Legend Has High Praise For Leinster
The Rewind
1 day ago
By Eoin Harrington
Watch: Brilliant Dermot Morgan Dublin Segment From 'The Travel Show' Resurfaces