On the 25 May, 1963, an emotional Matt Busby gazed toward the Royal Box in Wembley Stadium with unadulterated pride. Manchester United had just won their first major trophy since the Munich tragedy and his players were streaming up the steps toward the FA Cup. The man at the head of the queue was United's inspirational Irish captain; Noel Cantwell.

Cantwell strode forward to collect the trophy, shook the queen's hand and instigated pandemonium when he raised the little tin idol above his head. Manchester United were back. 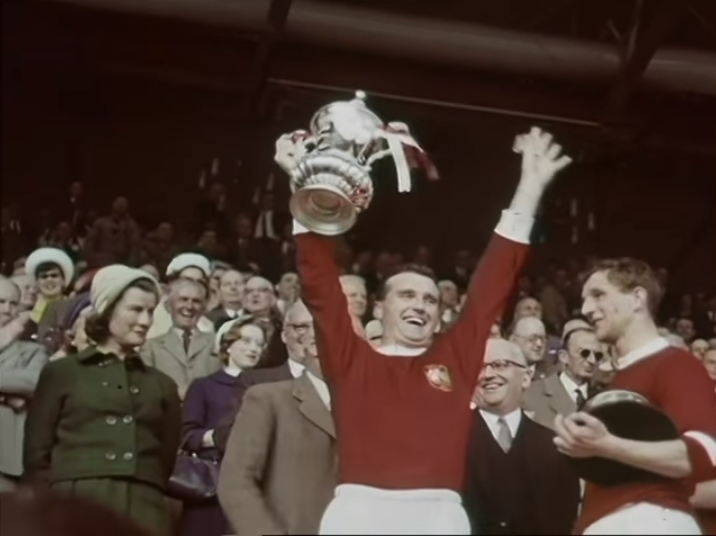 Hailing from Cork, he was one of the best full-backs of his generation. A mentor to Denis Law, John Giles, Bobby Charlton and Bobby Moore. A man who slatted Matt Busby's methods and in return was named captain. A footballer as luxurious as his full name; Noel Euchuria Cornelius Cantwell.

Cantwell was born to lead. It was an all-encompassing career that saw him move from Western Rovers to Cork Athletic before eventually captaining Ireland and Manchester United. Later, he managed Coventry City and Peterborough. His sincere nature naturally commanded respect from his peers and he was even voted chairman of the PFA.

Now Cantwell’s contribution is somewhat underappreciated, but he was one of the nation’s greatest footballers; a man who stunned the British public with his swashbuckling style and pissed off the aristocracies for similar when he jokingly tossed the FA Cup into the air. He was crucial to the recovery of the biggest club in football and established a template for a golden generation of Irish talent to follow.

Born in Mardyke, Cantwell kept good company during his childhood. Munster Rugby hall of famer Ray Hennessey was his best friend, British and Irish rugby Lion Tommy Kiernan his neighbour. Cantwell was a talented cricket player at the time and would even go on to play for Ireland. His summer holiday ventures back to Cork to play that game were a constant source of irritation with United boss Matt Busby.

In 1952, Cantwell moved to West Ham and instantly impressed. This was a sport defined by disintegrating pitches and burdensome footballs. Games were ferocious, tackles vehement. In an era when brawn triumphed brain, Cantwell’s combination of the two ensured he was a prized asset at the time.

“A superb professional, full of life.”  Is how West Ham legend John Lyall would later describe him. Cantwell was a mentor to Lyall. This format of description is routinely used in reference to the Irishman. “He was a great player, but was a magnificent man,” said Denis Law, speaking at his funeral in 2005. Writing in his autobiography, Bobby Charlton was similarly forthright in his praise:

My appreciation of Noel Cantwell was much more straightforward. I liked him as a man and, if there was such a thing, I thought he was a United type. I also admired him as a player ... sometimes the quality of his playing ability was overlooked, but he was a defender of considerable class, strong on the left side and with a very nice touch. When he led us out for the 1963 cup final, I thought, 'This is good - we have a real captain.'

When at West Ham, his distinctive approach had a significant impact on the Lyall. Cantwell’s revolutionary ideas on football began to embed themselves into the club and in 1958, he captained the Hammers to winning the Division Two championship and back to top flight football.

Cantwell refused to see the club stagnant and thus, in September, he approached his manager Ted Fenton and urged him to make a drastic change. A 17-year-old centre back had caught his eye in training and Cantwell had taken him under his wing. Cantwell wanted this youngster to be his new defensive partner, and thus on 8 September 1958 West Ham took on Manchester United and Bobby Moore made his first-team debut.

This was a relationship that would blossom and in 1962 Cantwell again stood alongside Moore, except this time he was a witness as the Englishman forged a new partnership. Bobby and Tina Moore were married in Essex, Noel Cantwell was his best man.

In 1964, an international friendly took place between Ireland and England at Dalymount Park. As the two sides lined out alongside each other in the tunnel, Cantwell took his place at the front as captain. Across from him stood Bobby Moore, the student turned master. 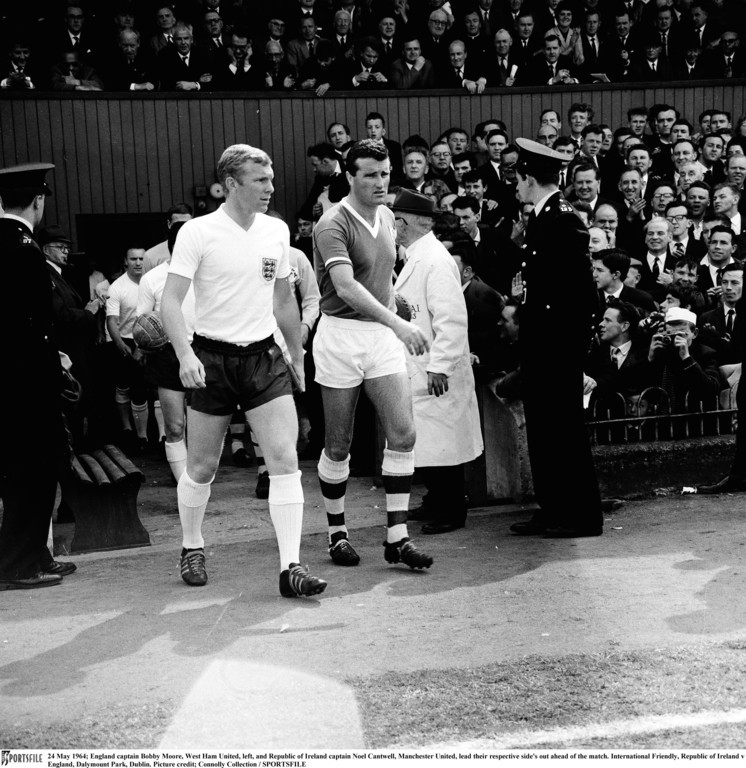 By 1960, Noel Cantwell had outgrown West Ham. Manchester United offered £29,500, a record fee for a full-back and the Irishman arrived at a club still reeling from the tragedy of the Munich air disaster.

Twenty-three people perished as a result of Flight 609’s crash in February, 1958. Eight were United players. An appalling loss of life that left the club grief-stricken and manager Matt Busby fighting for his life. He recovered and was quickly faced with another challenge, the task of reestablishing Manchester United as a powerhouse of European football.

He had a big rebuilding job to do because although there was some exceptional kids there, but they were kids. Matt thought ‘I must get some experience in there’… so he bought myself.

It was a difficult period even for the people at Old Trafford because they still had the memories of Duncan Edwards, David Pegg...

As Cantwell told RTE, he was recruited in order to add some experience to a squad and team desperately lacking in it. It is here where his relationship rekindled with another Irish football legend, John Giles.

Giles was a footballing prodigy in Dublin and called into the Irish squad at just 18. His debut came in a friendly international against Sweden and as he outlined in his autobiography, one man ensured it went smoothly.

We could hear the crowd rumbling above us in the stand, and the sound of the brass band marching around the pitch. Noel Cantwell the captain did everything right, coming over to each of us with a few words of encouragement: 'settle down, enjoy it, get on the ball.' It wasn't the words he said that mattered, it was the fact Noel Cantwell was talking to me. That was enough.

Noel Cantwell scores from the spot for Republic of Ireland against Austria at Dalymount Park in 1963 pic.twitter.com/rpu3vgrvUe

In his first season, Man United mustered a seventh-place finish but had the highest average attendance in the league. Cantwell would later recall asking Busby "how do we play?" only to be told, "we play football." An apprentice at the club would late describe his instant impact and fury at the standards within the club. Eamon Dunphy was immensely impressed by his fellow Irishman and described his rage upon arrival:

Doesn't anybody actually talk, or even think, about the game here?' he'd fume. 'Why isn't training organised? Why don't we ever see Busby? Just a bit of running, head tennis, then round the back for a free-for-all kickabout . . . Then, pre-match, Busby's simplistic "enjoy-it-lads-and-just-give-it-to-a-red-shirt". - Give it to a fuckin' red shirt! You don't need a manager for that. How do you find a red shirt to pass to if you haven't planned it, worked on it, thought about it and talked about it?

Busby responded by making him captain. In 1962, they finished seven points above relegation. By 1963, Man United still had not recovered. A poor league showing meant the club's sole hopes of silverware were in the FA Cup and 99,604 people packed into Wembley to watch them take on Leicester City in the final.

Cantwell started at left-back, fellow Dubliner Tony Dunne was on the right and John Giles ahead of them through the centre. They secured a comfortable 3-1 win. It proved the bedrock of the club's return and granted them access to the  European Cup Winners Cup. The following season they would lose a title race with Liverpool by just four points.

Cantwell was touted as Busby's successor but instead opted for an unsuccessful managerial role with Coventry. He ended up with Peterborough, where he was hailed as 'The Messiah' after winning the Fourth Division title in his first full season.

Cantwell's personal life was subject to cruel loss when one of his three children passed away. His 22-year-old son, Rob, died in a car accident. He himself passed away in 2005 after a long battle with cancer. The likes of Bobby Charlton, Tina Moore, Paddy Crerand, Jack Carmichael and Denis Law all attended his funeral.

Earlier this year, his other two daughters, Kate and Liz Cantwell, returned to Cork to scatter his ashes." I always felt that he should come back to Cork because this is his home," they told the Irish Examiner. 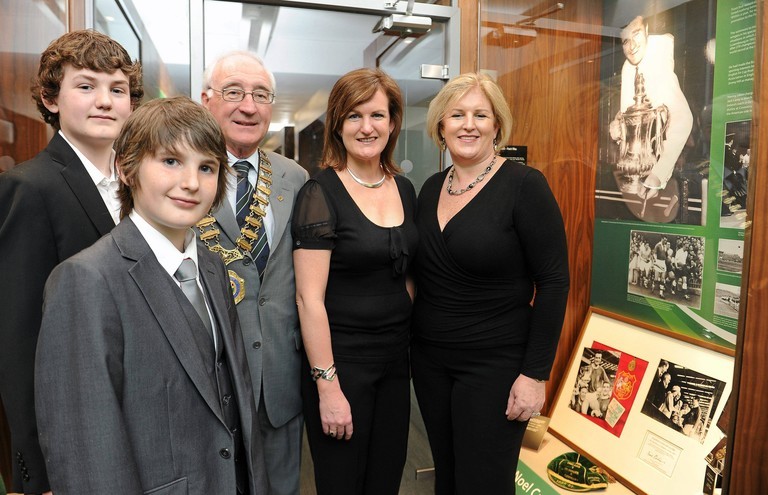 In recent years, Ireland has worked towards gifting Cantwell's career the recognition it deserves. The FAI unveiled a gallery tribute at their headquarters in 2010 and Cork's lord mayor unveiled the Noel Cantwell Walk in 2015.

Whether it be in his role as a team-mate, captain or coach, Noel Cantwell had a profound impact on the game of football. "Noel was a leader of men," Denis Law told the Irish Independent in 2005 "you wanted to follow him."

Football
1 year ago
By Arthur James O'Dea
John Giles: 'John Delaney Rang Me At The Time For A Bit Of Advice'
Previous Next

Football
7 months ago
By Maurice Brosnan
'You Feel Hatred From Others' - The Legacy And Lunacy Of Leeds United
Football
1 year ago
By Eoin Lyons
John Giles: Jamie Redknapp Talking Hoop About Paul Pogba Tackle
Football
1 year ago
By Arthur James O'Dea
John Giles: 'John Delaney Rang Me At The Time For A Bit Of Advice'
Popular on Balls
Rugby
7 hours ago
By Gary Connaughton
Watch: O'Driscoll And Dallaglio Speak Nothing But Sense On Saracens Mess
59