Norway Dump Australia Out Of Women's World Cup On Penalties

Sam Kerr was one of two Australian players to miss a penalty as Norway beat the Matildas 4-1 in a shoot-out following an engrossing 1-1 draw on Saturday to reach the quarter-finals of the women's World Cup.

Ingrid Engen converted the decisive spot-kick for the Norwegians after both Kerr and Emily Gielnik had failed to convert for the Australians in Nice.

Norway had earlier taken the lead through Isabell Herlovsen before being pegged back by Elise Kellond-Knight scoring direct from a corner late on.

Nobody could find a winner in extra time, although Australia had Alanna Kennedy sent off, but the 1995 world champions had the last laugh and will go through to a quarter-final against either England or Cameroon.

"It looked like we hadn't done anything other than penalties our whole life. It was really controlled and a fantastic team effort in the shoot-out," said Caroline Graham Hansen, one of four Norwegian players to score from the spot.

For Australia, it is a painful end to their hopes of at least making the quarter-finals, as they had done at each of the last three World Cups.

"I don't know if there are any words to describe how I'm feeling but, more importantly, how the girls are feeling," said Australia coach Ante Milicic.

Of Kerr's penalty miss, he added: "Only big players can miss penalties because small ones don't take them."

As Kerr and Australia go home, Norway remain on course to meet their stated objective of finishing among the medals despite coming to the tournament without their biggest star, Ballon d'Or winner Ada Hegerberg.

They had drawn first blood, taking the lead just after the half-hour mark. Australia defender Steph Catley failed to cut out Karina Saevik's ball in from the right flank and Herlovsen pounced to score with a clinical finish.

For a long time it looked as though that would be the only goal, with the Matildas left frustrated just before half-time when they were awarded a penalty only for the decision to be overturned.

German referee Riem Hussein pointed to the spot when she saw what appeared to be handball by Norwegian defender Maria Thorisdottir. However, she changed her mind after a review of the images showed the ball had in fact struck her shoulder. 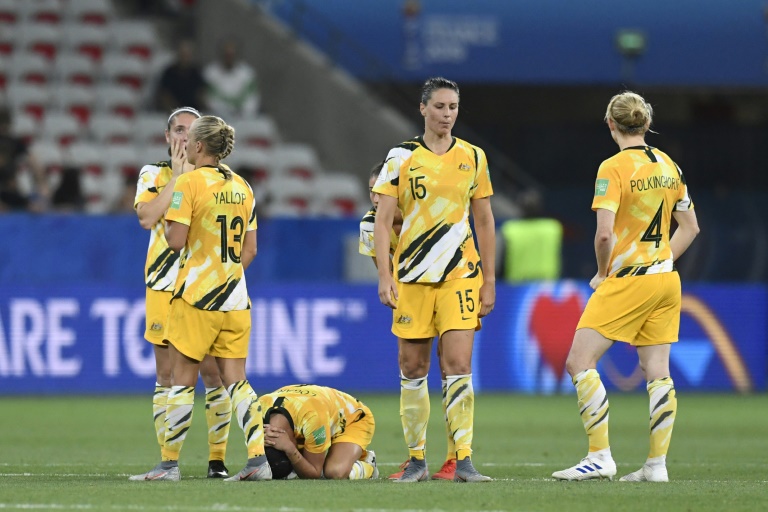 Kerr and Hayley Raso had already come close for Australia before that and Kerr then had an effort ruled out for offside in the second half.

Nevertheless, with just seven minutes of normal time left, they drew level in fortuitous fashion as Kellond-Knight curled in a corner from the right and the ball evaded everyone on its way into the net.

It was a painful way to concede for Norway, although they almost won the game in injury time when a Hansen effort from the edge of the box hit the inside of the post and rolled out to safety.

Into extra time they went, and Australia were reduced to 10 players in the 104th minute when Kennedy saw the first straight red card of the World Cup for pulling down Lisa-Marie Utland as the substitute ran towards goal.

Vilde Boe Risa hit the bar with an audacious attempt from range just after that, but Australia held on for penalties, only to see Kerr blaze her kick over before Gielnik's was saved while Norway converted all of their efforts from 12 yards.

See Also: Leeds Attempt To Pull Off Transfer For The Ages By Signing Gianluigi Buffon