Here Are The Odds On Where Lionel Messi Will Go Next

Like bread and butter. Salt and pepper. One of the great partnerships of the last two decades is coming to an end.

Lionel Messi looks looks like he'll leave Barcelona after latest developments around his contract for next season.

The 34-year-old appeared to be keen to remain at his boyhood club, but Barcelona reportedly are unable to fulfill a five year contract extension agreed this summer.

The Argentinian had agreed to a significant pay cut to stay at Barcelona. The club said, in a statement, that it "cannot happen because of financial and structural obstacles."

Messi now sees himself enter into free agency status. Where will he go next? We've studied the odds to see who are the bookies favourites (these odds came from Ladbrokes).

It's to no surprise that PSG are flying ahead in the odds. The French giants have been the most active top European club in this summer's transfer window.

PSG appear to have the money that other big clubs don't. That could go in their favour in a contract negotiation, and it seems Messi would be most likely to start fresh in Paris.

After the recent signing of Jack Grealish and the alleged impending signing of Harry Kane - what's another one for Man City? Sure it would be rude not to.

Seeing Messi play in the Premier League would be a sight to behold, but you can't help but feel Man City might have exhausted their budget a bit with the Grealish signing. Who knows.

If PSG, Man City or a resign isn't possible - the odds are Messi could fast forward the twilight chapter in his career. The MLS has been a keen option for many in the back end of their careers.

You have to feel Lionel Messi has more to give than the MLS. But you won't begrudge him for going to the U.S. after all he's achieved. It's a difficult one.

There wouldn't be much of a nicer story than Messi returning to a club he supported from a young age. Messi spent six years at Old Boys academy from the age of six.

It's likely they might be outpriced by the transfer, given Messi still has a lot of money to earn. If he wants to go down the nostalgic route, a return to Rosario would be a fairytale.

See Also: Infamous El Chiringuito's Messi Reaction Is Everything You Hoped It Would Be 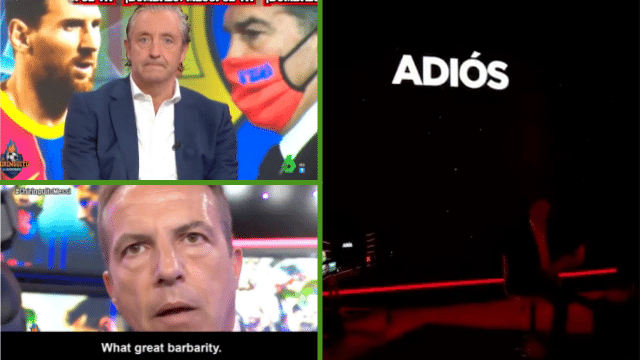 Football
1 week ago
By Eoin Harrington
Referee Ovrebo Admits Chelsea Should Have Had A Penalty In 2009 Semi-Final
Football
1 week ago
By Gary Connaughton
Gerard Pique Names 4 Players Set To Dominate Next Generation Of Football
Football
2 weeks ago
By Eoin Harrington
How Liverpool Exposed Messi And Suarez At Anfield In 2019
Popular on Balls
GAA
3 days ago
By PJ Browne
Mayo's Padraig O'Hora Using Football To Promote His Real Passion
Rugby
22 hours ago
By Colman Stanley
'That Pace, That Intensity, That Organisation' All Black Legend Has High Praise For Leinster
GAA
22 hours ago
By PJ Browne
Jim McGuinness's Gut Tells Him Dublin Will Win The All-Ireland
33