'Truly A Blessing': Ogbene On Being First African-Born Player To Represent Ireland

Chiedozie Ogbene garnered much praise on Tuesday night for his cameo off the bench in Ireland's 0-0 draw with Hungary. The 24-year-old Rotherham player made his senior debut in Budapest - and in doing so became the first ever African-born player to represent Ireland.

Ogbene impressed fans with his brief appearance, nearly scoring with his very first touch at international level after some brilliant movement put him in on goal.

It could have been a dream debut for Chiedozie Ogbene but the angle was against him! https://t.co/n3vd2sk3dM #RTEsoccer pic.twitter.com/sIT4b3Fp04

He was lively throughout his five or so minutes on the pitch, and certainly left his mark on the game. Speaking after the full-time whistle, he reflected on what it meant to be the first African-born player to represent Ireland.

It’s truly a blessing. Just to showcase that if you can believe and never give up, what can happen. To be titled the first African-born, you know, I’m really blessed and it’s a huge honour. It’s something that I want to inspire everyone else to follow their dreams.

There was controversy at the beginning of the game, when the Hungarian fans booed the Irish players as they took a knee before kick-off.

Ogbene spoke of his feelings on the booing, and said he was proud of his Irish team mates for standing firm in the face of the crowd's reaction.

I was obviously disappointed. We all go through different stories and different histories in our lives, but this is something that black people have been fighting for many years – discrimination and racism, there’s no place for it in any sport or any place. I was quite disappointed, but it is what it is. We stood strong and I’m so happy that we as a team took the knee to show solidarity between us all.

This has been going on for many years and we won’t find a solution overnight. It will take time. I’m so happy that we continue to show how important it is to accept everybody for who they are and educate people. I’m so proud of the team.

It was suggested that a late goal by Ogbene would have been the perfect way to silence the Hungarian fans' reaction to the anti-racism gesture, and the Rotherham player commented on that suggestion in the post-match press conference.

Early in the game, I was hoping I’d come on and get an opportunity to score in front of their fans. But maybe it was the best thing that it didn’t happen, because I might have let my emotions get the better of me with any sort of celebration I would have done!

It wasn't to be for Chiedozie Ogbene in front of goal this evening, but his brief debut has given Ireland fans an exciting glimpse at his potential for the future. 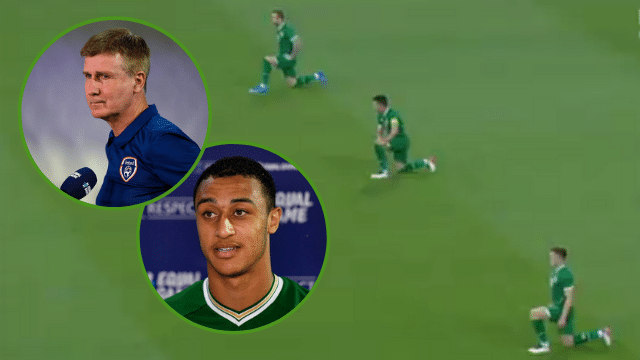