Gerrard Headbutts Camera And Other Madness In An Old Firm Classic

There is a title race in Scotland, at last. Rangers proved their credentials today with a 2-1 win over Celtic at Parkhead. It was a deserved victory with Rangers the better side throughout. It was far from straightforward though, with a host of mad moments throughout the game, proving that, at last, the Old Firm is back!

THAT'S how it feels for Steven Gerrard - massive win for @RangersFC and their boss!

On the final whistle, Rangers manager Stevie G didn't hold back. Screaming into the camera isn't a new one for the Liverpool legend, but sticking his loaf into the lens seems to be a new one. He later through the same camera out of his way entirely. All in all, classic Gerrard.

Imagine Neil Lennon screaming down the camera like Gerrard 😂.

Steven Gerrard celebrating a big win in a title race in front of a camera is bound to end well. There’s no history of that going wrong, is there?

Alfredo Morelos doesn't score and is sent off against Celtic... AGAIN!

The Sky Sports commentator was waiting all game for his moment, when Morelos would finally break his duck against Celtic and wrap up the day for Sreven Gerrard's men. Unfortunately, though it was Rangers' day, it wasn't Morelos'. With time basically up, and Celtic's last attack sniffed out, Morelos inexplicably threw himself to the ground in the box, earning a second yellow and another red card against his team's old enemy.

To add to it all, Rangers coach Michael Beale then lost the head and got sent off too. This is all literally seconds before Stevie stuck his head into the camera.

Rangers dominated the first half hour of the game. Celtic could barely get out of their own half. When they did, they immediately won a penalty. It was a lifeline for Celtic to expel a terrible start to the game, but unfortunately, Ryan Christie's penalty the bottom right was brilliantly saved by the Rangers keeper, who was almost unbeatable all day. 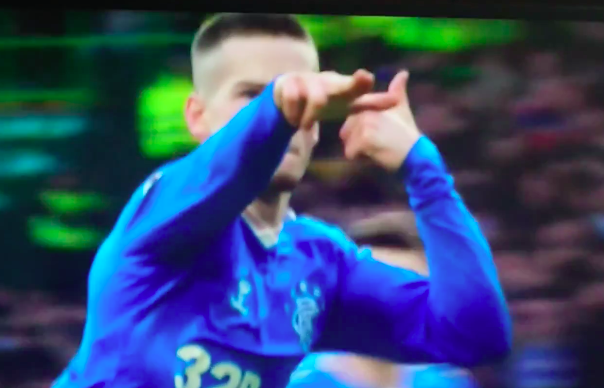 Minutes after the penalty, Rangers took the lead with a brilliant Ryan Kent strike. The former Liverpool midfielder then went on the make inexplicable gun shooting signs at the Celtic fans in his celebration, something that we are sure not to have heard the last of.

No VAR in Scotland, Good News for Celtic

Celtic got back into the game before half time when Callum McGregor's long range shot took a horrible deflection and sent his namesake the wrong way. On closer inspection, that deflection was off the hand of Odsonne Édouard. In a VAR world, this is a disallowed goal. In Scotland, it's just more fodder for conspiracy theorists and Old Firm fans. A much more enjoyable world, we'd all agree?

Former Rangers striker Kris Boyd is the most angry, biased man in punditry:

Scottish punditry is always hilariously biased. Chris Sutton generally epitomises it, but we're not sure we've ever seen anything like Kris Boyd today. At half time, he was like a petulant child, furious at the referee for rightly giving a penalty and not spotting the Edouard hand ball. He wasn't far off calling a conspiracy against Rangers among Scottish referees.

By full time, as the cat who got the crea, he had gone down the bombastic route, slagging off Celtic fans for their decibel levels and describing a game that went down to the wire as "men against boys". More Kris Boyd please Mr. Sky!

It's great to have the real Old Firm back all the same.