Manchester United look to be on a slippery slope at the moment.

Despite having a decent start to the season in the league, there was a sense that the results they had picked up had shielded what were in truth some very poor performances. This now looks to be catching up with them, with Ole Gunnar Solskjaer's side having lost four of their last seven in all competitions.

Their performance against Leicester City was similar to what we have become accustomed to seeing from them in recent weeks. They struggle to create much in attack, depending on moments of individual brilliance to get them over the line in games.

The fact that they are so porous in midfield also doesn't help. When you couple that with a lack of pressing up front, it is often a recipe for disaster.

How you control a game is not just in possession, it's out of possession you have to win the ball early or if you're not going to win it early everyone has to work.

Man United when they lose the ball they allow you to get straight into them, so until they become the kind of team they want to be then I think this will continue.

In saying that, they are four points off first.

Leicester have won by 4 goals to 2 against Manchester United! 🦊 pic.twitter.com/GpPkwNR0GQ

A lack of control in games is certainly an issue. Whereas many of the top teams can hold onto leads by dominating possession after going ahead, there is always a sense that United can be got at due to their lack of cohesiveness all over the pitch.

The likes of Bruno Fernandes and Cristiano Ronaldo are hardly the most fierce in their pressing, putting pressure on other areas of the pitch to pick up the slack.

Owen Hargreaves agreed with Barnes' assessment of their issues, saying his former club have encountered the same problems all season.

Virtually every game I’ve seen they’ve had some brilliant moments where they’ve been saved by individual brilliance but they never have control of games.

Every team - whether it’s Villa, Villarreal, Everton - every game they conceded poor counter attacks, today they got punished by players who are great on the counter-attack.

And when they’re that open - John [Barnes] made a good point, the front four really don’t track back, there’s too much space for quality players. That result was coming.

Of course, the issue not addressed by Hargreaves in Ole Gunnar Solskjaer's role in this.

It is a manager's responsibility to get their team playing as a unit, something United clearly do not do. Having been in charge for three years, the Norwegian really should have implemented a distinct playing style by now.

Considering the talent he has in this squad, it is fair to say he is massively underachieving at the minute. How long the club's hierarchy will allow that to continue for remains to be seen. 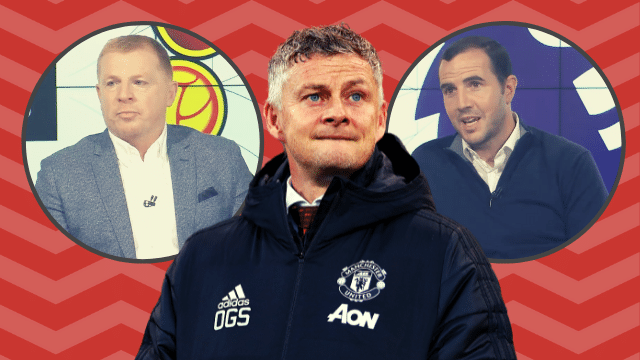