Watch: Padraig Amond Is At It Again With Another Cup Giant-killing

Padraig Amond is an FA Cup legend. The 32-year-old Carlow man made his name scoring in the competition for League Two Newport County against Spurs in 2018, forcing the London club to a replay at Wembley. From there, he went on an incredible run, scoring in the next seven FA Cup rounds he played in, going all the way to last year's competition.

In that time, his club, Newport, became known for their giant killings. Middlesbrough and Leicester City fell at the feet of the Welsh club and Amond in 2019, before the striker's goal put them within a goal of Manchester City in the 5th round, with just a couple of minutes left on the clock.

This season, Amond and still League Two Newport aren't willing to sit around until the depths of winter to get their giant-killing boots on. The Carabao Cup has already see them upset Swansea City on the way to the third round, and last night they dispatched recently relegated Watford with ease.

A 3-1 victory was sealed with a lovely effort from Amond, who had somehow not got in on the act in the opening two rounds of the competition.

Amond hasn't had the chance for the same heroics in the EFL Cup during his time at Newport, though he had scored three goals in his four games for them in the competition before this season.

Up next for Newport is another tie at Rodney Parade in the Last 16, most likely against Newcastle United, if they can overcome Morecombe. They've already shown the Championship opposition is no match for them. It's past time there was a Premier League team put in their way.  Who would bet against them?

SEE ALSO: 'In Years To Come I Will Be Unbearable' - Padraig Amond Looks To Cap Off Incredible Season At Wembley 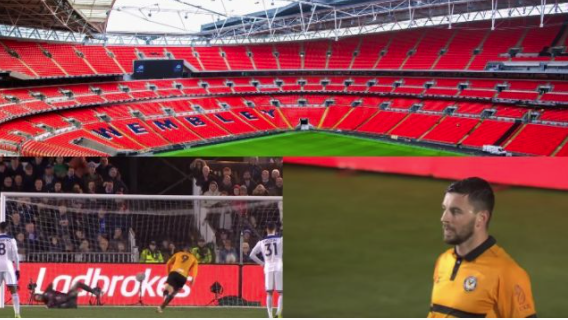 Football
2 months ago
By Conor McKenna
Special One Treated To Luxury Stoke Changing Room
Football
4 months ago
By Balls Team
'José Was Not Happy About It, But Nature Was Calling'
Football
5 months ago
By Gary Connaughton
Watch: Rory Delap's Son Scores Carabao Cup Screamer For Manchester City
Previous Next