One of the most notable aspects up to this point of the Premier League season is the added physicality of the games. That is no coincidence, with the officials told to let the game flow more and not blow their whistle for incidents in which there was minimal contact.

However, not everyone is happy with the way things have been going. Ole Gunnar Solskjaer questioned this move after Manchester United's draw with Southampton last week, while Jurgen Klopp did the same after Liverpool's victory over Burnley.

Sean Dyche's side have certainly come in for some criticism in the aftermath of that fixture. A number of clips of Burnley players pushing the boundaries of the rules have been doing the rounds on social media over the last week or so, including a some examples of them tossing Liverpool players to the ground off the ball.

Burnley were in action again this afternoon, drawing 1-1 with Leeds United at Turf Moor. It appears as though they were up to their old tricks again.

Speaking to Sky Sports after the game, Leeds striker Patrick Bamford called out James Tarkowski for a 'jiu-jitsu' move he pulled by tossing him to the ground. Despite this, the 27-year old said he is in favour of increased physicality in the Premier League as long as a line is not crossed.

It's always tough coming here. You don't want to be disrespectful, but you know what you're going to get when you play against Burnley.

They do make it difficult and it's a bit of a fight. It was a fight all game. I think we definitely deserved a point, we created a lot of chances. We will be happy with a point to be fair...

To be honest, I was a little bit annoyed with Tarkowski. It was just a toss to the floor and tried to do some weird thing on me. I don't know what he was doing.

It was just one of them, I quite enjoy having a little fight with him. After the game we were all fine and shaking hands and stuff, so it's alright...

I think [the added physicality this season] is a good thing. It allows the game to be more interesting and exciting for the fans. You like to see those hards tackles and little battles.

I had one last season with (Everton's) Yerri Mina, it was the same this week with these defenders. It's enjoyable, but obviously there is a line you can't cross over.

Bamford would have the last laugh in the contest, scoring a late equaliser to earn a draw for his side. 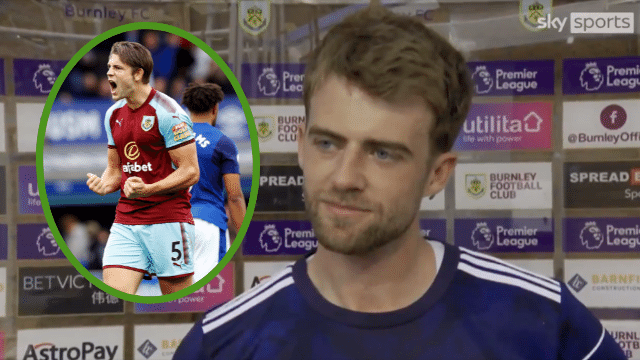