"It's going to be a lot tougher than what people think," says Patrick McEleney.

The Dundalk midfielder is talking about Thursday night's Europa League playoff against Faroe Islands side KI.

The League of Ireland champions go into the game at the Aviva as strong favourites following their dramatic penalty shootout victory over Moldovan side Sheriff Tiraspol last week. KI defeated Dinamo Tbilisi 6-1 to progress.

Having watched European and domestic footage of their opponents, McEleney believes KI are definitely up a level from Andorran side Inter Escaldes who they beat in the second qualifying round. He compares them to the Latvian team Riga whom they defeated in the Champions League qualifiers last year.

"They got a great result in the last round," says McEleney, speaking at the launch of the SSE Airtricity League FIFA 21 Club Packs.

"They're a physical team who put the ball in the box as much as they can and work really, really hard without the ball - they get everybody behind it.

"I know everybody's looking and saying that it's a team from the Faroe Islands but you have to look past that. I'm sure everybody will realise during the game that they're a decent side with a lot of threats.

"We're not going into it with the mindset of 'Oh, this is going to be a walkover'.

"I think we've earned the pressure. We've got good results. If somebody said we'd be favourites in a Europa League playoff a couple of years ago, you'd have laughed it off." 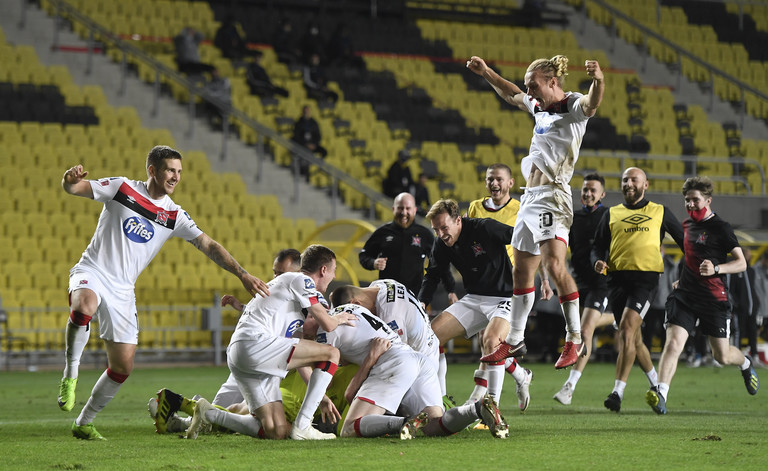 24 September 2020; Dundalk players celebrate after the penalty shoot win against FC Sheriff Tiraspol in the Europa League third qualifying round at the Stadionul Sheriff in Tiraspol, Moldova. Photo by Alex Nicodim/Sportsfile

McEleney was there four years ago when Dundalk made it all the way to the Europa League group stages where they faced AZ Alkmaar, Zenit St Petersburg and Maccabi Tel Aviv.

His favourite memory from that run is the two-legged victory over BATE Borisov in that year's Champions League qualifiers.

"We got such a hiding over there," says McEleney.

"I know we were only beat 1-0 but it was one of the toughest games I've played in. It was backs to the wall for the whole game."

Dundalk played the Belarussians off the park in the return leg, winning 3-0 and progressing to the playoff round where they lost out to Legia Warsaw. The consolation prize was a spot in the group stages of European football's second tier competition.

"I'm sure the lads that are here now are sick of hearing the stories of 2016. It's time to make new memories."

EA SPORTS™ will mark the launch of FIFA 21 with the return of the popular SSE Airtricity League FIFA 21 Club Packs. Featuring the individual club crest of all 10 Premier Division teams, these exclusive sleeves will be available to download free from https://www.ea.com/games/fifa/fifa-21 when the game launches on Friday, 9th October!

The SSE Airtricity League Premier Division will once again feature in FIFA 21, the 13th season that the league has featured in the game.