It was a brave decision to walk away. Leeds United are a Championship club that look destined for the Premier League. Paudie O'Connor had a year left on his contract and an abundance of alternatives, with potential loan and permanent offers from other Championship clubs.

But last summer he joined League Two side Bradford City on a permanent transfer.

Great to be back winning at Valley Parade yesterday! ⚽️?? #bcafc

"I had a year on my deal at Leeds and the option of another one but I had to come to a decision. It was basically 'stay here and maybe go out on loan again' or look elsewhere," O'Connor tells Balls.ie.

"I am 22 now and it was in the back of my mind that I needed to be playing every week. Game time. That was pretty much my number one priority. Leeds are a huge club, don’t get me wrong.

"I obviously would have loved to try break in but when you keep banging on the same door and it is not opening, you have to look elsewhere."

"Bradford are a huge club and I get on with the manager there. I’ve worked with him on a few occasions and he plays a good brand of football; he will give young lads a chance. That was the deciding factor between staying and going, getting a chance to play games at another big club."

It has already been a colourful career for the Irish defender. The journey began at his boyhood club, Limerick FC. O'Connor broke through to the first team before he had even completed his Leaving Cert and helped steer the club to Premier Division promotion before departing for Leeds. 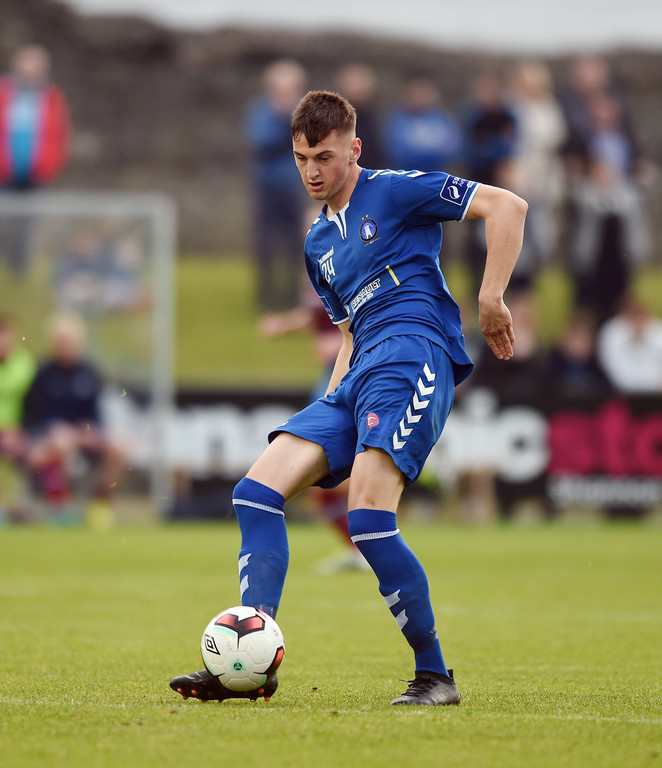 Loan spells at Blackpool and Bradford quickly followed. Intertwined with that were championship and FA Cup appearances for Leeds. He watched as Bradford were relegated from League One last year and saw the project Gary Bowyer was trying to build moving forward.

There was not a moment's hesitation when the club came calling again last June. O'Connor wanted to be part of that programme.

The new opportunity began with a bang. Earlier this month, the 22-year old scored a late winner as Bradford came from behind to beat Northampton 2-1 at Valley Parade. It instigated pandemonium amongst the substantial 13, 678 supporters.

"We were playing into our Kop end in the second half. It felt like they were sucking the ball towards the goal", he says with a laugh.

...we wouldn't want to get in Paudie O'Connor's way as he celebrates the winner either ?#BCAFC @officialbantams @Paudie97 pic.twitter.com/xhbuFk1npj

Shared elation, precisely what O'Connor wanted when he joined the club.

I come from Limerick where I played a lot of games at a young age. You have got to have something to fight for. When you go from playing regularly and move to a big club but don’t play, it is hard to deal with.

The Leeds experience was still one that benefitted O'Connor. He is quick to credit Liam Cooper, Pontus Jansson and Paul Heckingbottom for their individual work with him as a defender. That was much-sought and greatly received guidance. Upon his arrival in the UK, he was keen to tap into any available assistance. He's critical of other prospects for not doing similar.

"I was in university when I was playing with Limerick so I had never been full time until Leeds. I went from zero to a hundred quite quickly. I had to learn on the go and I felt like I had to have that sponge mentality, to go in and be open to everything.

"I actually think that is a problem for a lot of academy lads over here. You find lads in youth systems and scholarships who are 16, 17, moved into the reserves and they don’t have that sponge mentality, the right attitude.

"They think they know it, how to play and be professional. They try to live a life they haven’t earned yet.

"That is the one problem I would find over here. The ones that do succeed and breakthrough, they generally want to learn and have a good attitude towards learning no matter what age they are. I’m 22 and I will still be learning until I am 32."

What a day at Valley Parade! ⚽️👏🏼 Enjoyed that one😁 pic.twitter.com/ANrdXqq0gY

Bradford are currently two points off the playoffs and O'Connor's immediate priority is promotion. Collectively and individually, there are longterm aspirations as well. But they pale in comparison to the task of navigating the everchanging environment that is modern-day football.

Ultimately, Paudie O'Connor wants to enjoy his football. If he can someday do that at higher levels or in a green shirt, all the better.

"You always have longterm goals in the back of your head you want to tick off but often you can't focus on them too much. This is a week by week football, as I well know in six months time a manager could change, you could get injured and suddenly the picture changes again.

"The people close to me have probably found out there is never too much stability in football, you can’t look too far ahead really. I mean yeah, everyone has aims of playing higher in the Premier League, getting in the Irish international squad.

"Those aims will always be there. It is about taking every game week to week, trying to get as close as you can."