On a night when Frank Lampard was gifted a wonderful start to football management, Reading's Paul Clement suffered the disappointment of a last-minute defeat to Derby County.

Beginning his first full season with the club, Clement, who has previously managed Derby County, came in for criticism from one of his and the club's former players, Darren Bent.

Working on Sky Sports for the Championship's opening fixture last night, Bent, who spent last season out on loan with Burton Albion, was unforgiving in his criticism of Clement's spell with the Rams:

It was inevitable [Clement] was going to crumble [at Derby]. Training had changed and his philosophy from pre-season had gone out the window because we weren’t getting the right results.

Taking to his Twitter account, Paul Clement revealed his thoughts on the player he had briefly managed during his 8-month spell in charge of Derby County: 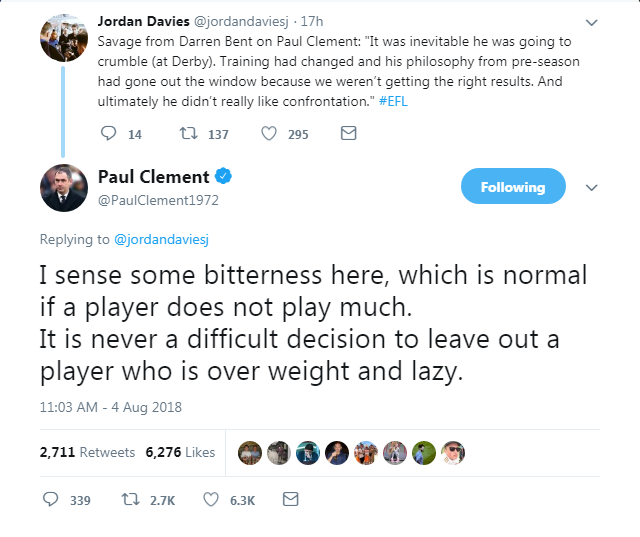 Signed on a free transfer a month after Clement joined the club in June 2015, Bent managed 25 appearances in the 2015/16 season; although, given that Clement was sacked in February 2016, it is understandable that some lingering regrets remain.

Criticising Bent for being both "overweight and lazy," it may not perhaps be the best course of action for a football manager to engage in such trivial rows online.

See Also: Report: Bayern To Ditch Jerome Boateng Over His Friendship With Jay-Z

Football
4 months ago
By Balls Team
Darren Bent Recalls Night Roy Keane 'Went Off' In The Dressing Room
Popular on Balls
The Rewind
17 hours ago
By Gary Connaughton
Quiz: How Well Do You Remember The 'Friends' Roommate Quiz?
3