Paul McShane Is Showing Manchester United's Next Generation The Way

The Wicklow defender signed as a player/coach with the Manchester United's U23s during the summer.

McShane famously joined Manchester United when he was 16 and won the FA Youth Cup in 2003. The Ireland international would play for Sunderland and Hull City amongst others but has returned to Carrington in an innovative coaching role that involves him working with everyone from the Under-15s to the Under-23s teams.

And every now and again, he suits up for the Red Devils.

Last night, wearing #62, McShane was on the pitch for the Manchester United U21s as they played the Bradford City U21s in the Papa Johns Trophy. It's slightly surreal to the 35-year-old on the same team sheet with Robbie Savage's son Charlie and an 18-year-old with the brilliant name Zidane Iqbal, but McShane is hugely committed to the job both on and off the pitch.

"Paul McShane, providing valuable experience and aerial assertiveness at the heart of the back four, was booked as the half drew to a close with the match remaining goalless," a report on the United website read.

While he was booked, he also produced a goal saving tackle to deny Bradford opening their account on the night in the second-half.

His interception proved to be telling, with Manchester Evening News' update on the game explaining it in detail.

How did that not go in?

Paul McShane slides in to somehow block a certain goal from six-yards out before it is scooped behind for a corner.

The updates also referred to McShane as having a stellar game in the heart of their defence as United held out for the win.

While McShane is a playing-coach, he also has a UEFA A License badge to his name already.

After taking on the role of United's player-coach in the summer, he explained how he hoped he could use his past experience to help his younger teammates at Old Trafford.

I am extremely pleased to be rejoining a club that means so much to me. I have been working on my coaching badges for several years and the opportunity to work with young players, whilst also playing in certain games, is the perfect role.

I have developed a great deal of knowledge over my career and I look forward to mentoring and supporting the next generation of Academy graduates by passing on all of my experience.

It feels very special to be back to where I began my professional career and I can’t wait to get started in supporting these talented players to reach their immense potential.

SEE ALSO: Shay Given On The Ups And Downs Of Being Duncan Ferguson's Teammate 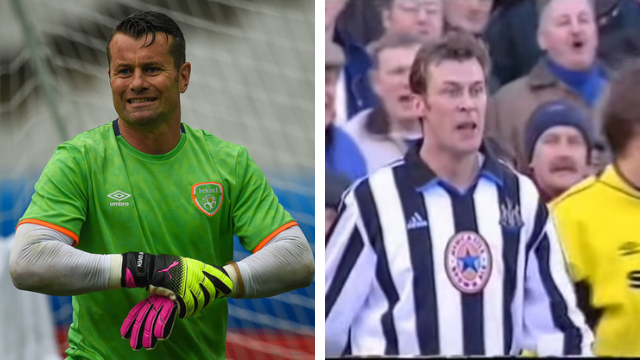