As bad as Manchester United have been in recent weeks, and as well as Liverpool have been performing, nobody could have predicted just how bad things would get for Ole Gunnar Solskjaer's side at Old Trafford yesterday.

Even in the immediate aftermath of United's dramatic late victory over Atalanta on Wednesday night, Paul Scholes was already worrying about what could be to come at the weekend. They had been very poor in the opening half of that game, something he believed could result in a 4-0 deficit if it were to be repeated against Liverpool.

The prediction was eerily accurate.

Of course, United would indeed find themselves 4-0 down at the interval in yesterday's game.

Paul Pogba was then brought on at halftime, only to almost immediately sloppily concede possession and allow Liverpool to score a fifth. This would be quickly followed by a red card for the player after a horror challenge on Naby Keita.

It summed up United's day perfectly, with Pogba smiling as he walked off the pitch and leaving his side even further in the lurch. Things could have gotten really out of hand had Liverpool not decided to ease up in the closing stages.

As you probably could have guessed, Scholes was absolutely appalled with what he had seen from his old team.

Speaking to Premier League Productions, the 46-year old even questioned if Paul Pogba should ever play for the club again after his performance in the game.

I think we all realise it’s been difficult, I just think the manager got caught up in the emotion of the comeback [against Atalanta in the Champions League] on Wednesday night.

We keep going back to that game but you were never going to do that against Liverpool, they have too much quality.

I don’t think it was a lack of effort. I think tactically they were set up in a way where this could happen and unfortunately it did happen.

Paul Pogba coming on to the pitch at half-time to try and help the team and maybe get a little respectability about it, tries to stand on the ball, tries to show how strong he is in the middle of the pitch… gives the goal away.

Then later on gets sent off with a ridiculous tackle. Now you’re 5-0 down with 10 men. You’d have to think, if Ole’s still a manager there, will we see Pogba again in a United shirt?

He’s caused mayhem over the last couple of years. Everyone knows what a talent he is, everybody trusts him, every manager trusts him, tried to give him his head and let him be the player he’s been.

But with all the commotion, not signing his contract, almost holding the club to ransom. Then he comes on and does something like that.

It’s not Ole’s fault, don’t get me wrong. But that’s part of it which almost summed the United performance up today.

Look, he probably will play [again] won’t he? But I don’t think they will be missing anything if he doesn’t.

He’s had numerous chances, he keeps saying he lacks consistency, but that is just [a lack of] discipline and disrespect for your manager and your team-mates, what he’s done today.

There is little chance that Ole Gunnar Solskjaer would actually follow through on Scholes' suggestion here, but it seems clear that the club need to cut their losses on a player who has turned out to be little more than an expensive transfer mistake.

Brought back to the club in an attempt to return them to their former glories, his lack of consistency and team first attitude has gone on to perfectly encapsulate United's failings over the last few years. 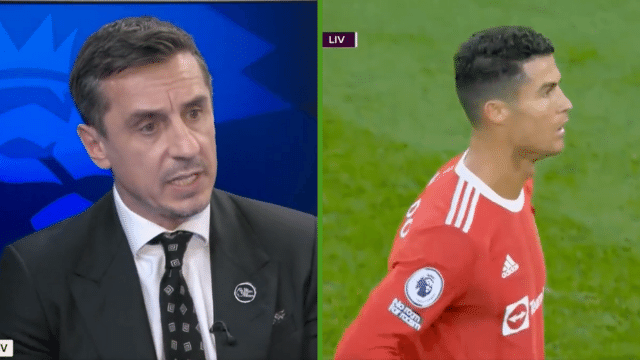