It was just eight days on from the moment which shook Irish football. Presented with the opportunity, Pele had to be asked: Did Thierry Henry cheat Ireland out of a place at the World Cup?

A nation still in pain got a modicum of sympathy from the Brazilian legend. Though, he dismissed the idea of replaying the playoff against France as "too complicated".

"The result wasn't fair, no doubt, but everybody can make a mistake. Even him (Henry)," said Pele.

"He did it accidentally. I don't think he thought he was going to handle the ball."

It was November 26th, 2009. Pele, flanked by FAI CEO John Delaney and FAI president David Blood, was seated at a press conference being held at Our Lady's Children's Hospital in Crumlin.

Then 69, Pele's visit to Ireland was organised by Derry author Don Mullan as part of the footballer's 'Goals For Life' venture to raise money for the Little Prince Hospital in Curitiba and the Crumlin facility.

The campaign looked for 40 Irish schools to raise €2,000. 40 years earlier, Pele had scored his 1,000th goal and dedicated it to the children of Brazil.  In return, schools would receive a special medal created by the Brazilian mint to mark the anniversary of Pele's goalscoring achievement. 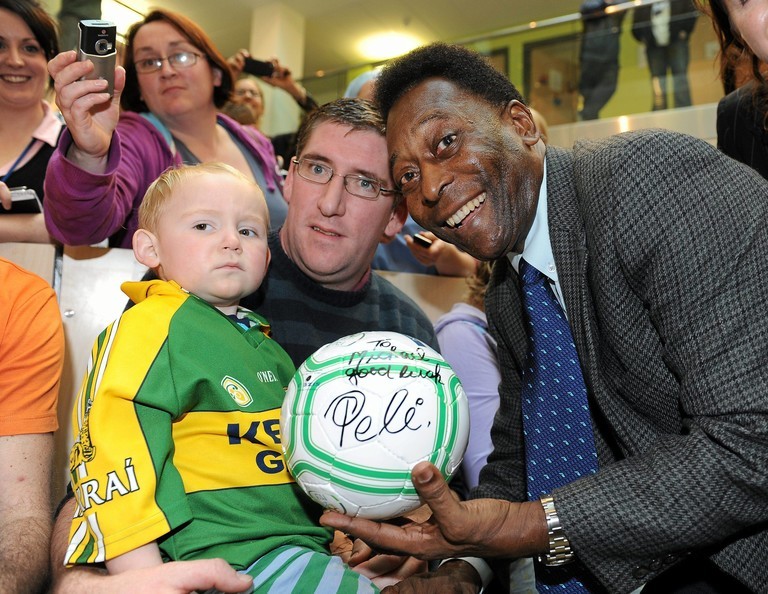 In 1963, Pele had played for Brazil in a friendly against Italy. The man who marked him out of the game was Giovanni Trapattoni, Ireland manager in 2009.

"I used to tell Trapattoni, 'You look like my wife. Wherever I go, you go. Go and play differently," said Pele.

He'd say, 'I have to mark you'. He was very difficult to play against. Very continental.

I talked to the president (John Delaney) and he said, 'Trapattoni is here'. But I said, 'Then I won't go'. But we are good friends now.

That summer, Dunboyne AFC had been named FAI Club of the Year. Along with a cheque for €5,000, there was to be another reward. "John Delaney also made the surprise announcement that Brazilian football legend, Pele, will meet club representatives later this year," the FAI website noted at the time. 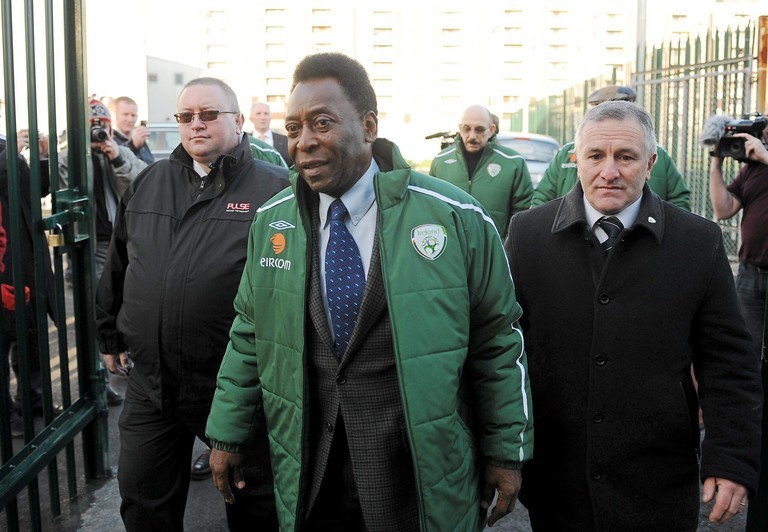 "The whole idea of Pele coming to Dunboyne is a joke until it's actually happening," Dunboyne secretary Kevin Higgins said in a video documenting Pele's visit.

"We're all here still not believing it until we see it."

For Eugene Dowling, a member of Dunboyne's executive committee, it was nearly all too much.

"The organisation for the day is something I wouldn't want to do again," he said.

"The actual logistics of getting Pele here by helicopter nearly fell apart yesterday because of the wind. We were going to have to switch to a garda outrider from Crumlin to here."

On a mild winter's day, Pele - who did arrive in Meath via helicopter - officially opened the Dunboyne club.

For club president, Paddy Monread it was, "Definitely the proudest moment I've ever had in my life"