Pep Guardiola and his Manchester City players have been understandably wounded by the manner of their exit from the Champions League semi-finals to Real Madrid.

The shock late comeback saw questions asked of City from all corners, with Jamie Carragher suggesting that Guardiola's failure to win a Champions League crown with the club would see him deemed a failure.

One of those to criticise Guardiola was former Manchester United left-back Patrice Evra.

The Frenchman suggested that Guardiola "doesn't want leaders" on the pitch, and that his players often play without personality. He likened City to PSG, who have experienced similar Champions League capitulations in recent seasons.

Evra appeared to place the blame for that Real Madrid defeat on Guardiola's shoulders. Now, the Manchester City manager has fought back. Evra's former United teammate Dimitar Berbatov also came out with damning comments about Guardiola in the aftermath of the Madrid defeat.

Guardiola coached the Barcelona teams that defeated Evra's United in the 2009 and 2011 Champions League finals - and threw a dig at those two Manchester United teams, suggesting they similarly lacked character.

Pep Guardiola was speaking at his Friday press conference ahead of this weekend's Premier League trip to West Ham.

Pep Guardiola on comments from former #mufc players saying he can't manage big players: "I didn't see when I played against them this kind of personality when we destroyed them in the Champions League final." #mulive [@footballdaily] pic.twitter.com/JMEj1g53sh

Guardiola responded to the criticism from Evra and Berbatov, as well as from three times Champions League winner Clarence Seedorf.

The answer is so easy. It's the same character and personality that we lost in Madrid in the last two or three minutes.

That's the same kind of character and personality. You cannot have personality, because we concede two goals in one minute when we have two chances to score.

After the last four games, we've scored 22 goals, we have incredible personality in this kind of thing.

Guardiola's Barcelona team beat Manchester United in a narrow contest in the 2009 final, before cruising past them in a much easier contest in 2011.

Evra started both games, while Berbatov made an appearance off the bench in 2009.

Guardiola's comments are sure to prickle with the red half of Manchester, but questions will continue to be asked of the Spaniard if he cannot deliver the European crown to the Etihad. 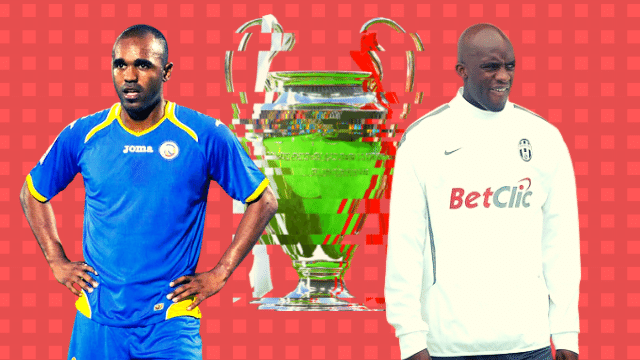