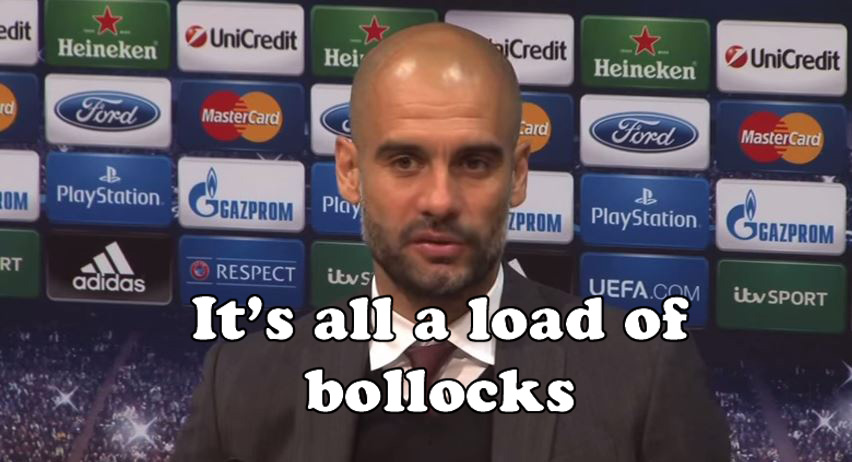 Pep Guardiola has revealed that he resents his Barcelona team being associated with the tiki-taka style of playing football. The now Bayern Munich manager declared his hatred of tiki taka to journalist Marti Perarnau, who penned a book on the work of the Spaniard.

Be yourselves. You need to dig into your own DNA. I hate tiki-taka. Tiki-taka means passing the ball for the sake of it, with no clear intention. And it's pointless.

The brilliant Barca team Guardiola managed in the late noughties are often credited with pioneering the one-touch passing style that the media dubbed "tiki-taka". However, Guardiola believes that the press are wrong for claiming that any of his teams played this type of football. He claims that Barcelona's high-volume passing game always had a point to it.

Don't believe what people say. Barça didn't do tiki-taka! It's completely made up! Don't believe a word of it! In all team sports, the secret is to overload one side of the pitch so that the opponent must tilt its own defence to cope. You overload on one side and draw them in so that they leave the other side weak.

And when we've done all that, we attack and score from the other side. That's why you have to pass the ball, but only if you're doing it with a clear intention. It's only to overload the opponent, to draw them in and then to hit them with the sucker punch. That's what our game needs to be. Nothing to do with tiki-taka.

It's safe to say Pep isn't happy with being tarnished with the tiki-taka brush.

Football
4 days ago
By Andrew Dempsey
Ronald Koeman's Surreal Press Conference As Barca Crumble
Football
1 month ago
By Eoin Harrington
What The Hell Have Puma Done With Their Third Kits?
Football
1 month ago
By Gary Connaughton
Barcelona Stars Forced To Take Pay Cut So Club Can Register New Signings
Popular on Balls
Golf
23 hours ago
By Jonathan Byrne
Sky Sports Ryder Cup Coverage Is Getting On People's Nerves
34