If you're looking for a light-hearted podcast laced with football talk, trips down memory lane and incredibly random topics - The Peter Crouch Podcast from the BBC is a good bet.

Since it's inception in 2018 - Crouch, along with BBC writer Tom Fordyce and Radio 1's Christ Stark, have brought a sense of comedy meets football with their seasonal audio runs.

Some of their guests in the past have ranged from an Andres Iniesta lookalike, to Prince William and Dev from Coronation Street, to name a few.

Loved doing this one

This week, Crouch and co deep dived into the world of being a soccer youth. Having spent most of his youth career at Tottenham, Crouch told tales of the youth players being assigned as 'bootboys' for the first teamers.

I would travel to White Harte Lane to help the kit man ... load the kit onto the van ... we'd get there before the first team players, we'd park in the bottom car park, we'd walk up and then we'd get to our jobs.

Crouch described some of the responsibilities the youth players had, from helping clear plates away in the team canteen to cleaning the boots of the players. Every player was assigned some first team boots to clean after every session.

I had David Howells and I had David Ginola. You'd build up a rapport with the person you cleaned boots (for), the way they liked it and stuff like that.

Crouch's stories of being David Ginola's bootboy in particular were amusing. One time, he got into a spat with Ginola's agent over how he cleaned his boots:

Peter Crouch tells story on latest podcast of how Nike told him off for being too hot with the Dubbin on David Ginola's boots in year he was PFA player of the season. Did a thorough job! https://t.co/MbWpp14Sft pic.twitter.com/5mH6a7jVPI

The other first team player Crouch looked after was defender David Howells. Crouch told a story of how Howells stitched him up at a training session, and made him see red for forgetting his boots:

I was training on the bottom pitch and one of the first team coaches came down and was like, "David Howells not got his boots." The first team were warming up - Les Ferdinand, Ginola, Rule Fox, Chris Armstrong, Darren Anderton. Big Sol was there. I just saw David Howells was running with them but with trainers on.

Unfortunately, Crouch didn't get away with that slip-up lightly:

I had to go into the group and jog around with them whilst David Howells is abusing me, it was a bad one. I was just like, "I don't know where they've gone." To this day - I don't know whether one of the lads was winding me up or what, I'm certain I put them in his bag. The mystery of Howells' boots.

It sounded like Crouch and the other youth players had a handful with the jobs handed down to them. He struggled with the pronunciation of David Ginola for instance:

Obviously I was on David Ginola's boots, was it David or Dav-eed? I didn't want to go too continental ... for me to go into the dressing rooms and say, "Are you finished with your boots D..av..id?". Do you call him David or Dav-eed? It's hard.

The Crouch/Ginola boots fiasco didn't end there. He told another story of when bootboys used to get tips at Christmas, and somehow Ginola failed to meet his end:

He didn't tip me at Christmas, let me add. So I'm doing the boots aren't I. Obviously he didn't know what the craic was. I think the going rate is probably about 50/60 quid. You know when there's a girl you like at work and you keep walking past, smiling and going like, "Wayyy, this is the day." Finally it got to the stage where I was the only one really who didn't have a tip, from the PFA Player of the Year. Les pulled him and said he didn't have a clue about the etiquette.

A lesson Crouch learnt for the rest of the playing career came as a youth player, getting to practice shooting with Ginola after training.

I was so excited by this whole scenario. The coach is pinging the balls into us at the edge of the box ... I was jogging on the spot, ready for the ball to come. I remember David sort of just tapping me on the shoulder and going like, "Why are you moving so much, just calm down and go to the pack and watch me."

Ginola then gave him some advice, after pinning the ball into the top corner:

The ball came in and instead of having two touches he just had one. Put it in the top corner, on the volley from outside the box. Then he walked back to me and just gave me like a shrug, wow, I almost had a bit of an erection ...

Crouch vowed that his experience as a bootboy and the tasks they were given in the youth team helped shape them as players.

I remember Ledley King was on Sol Campbell's boots at Tottenham. Sol was playing for England and Ledley wanted to be where Sol was. Those tiny little conversations, they might be about boots or change of studs but they might lead on to, "How are you playing." You build up a rapport.

See Also: 9 Photos That Prove Brian Kerr Was Ireland's Most Stylish Man Of The 1990s 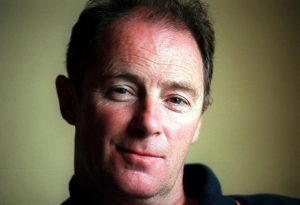