Still Bitter After All These Years: Peter Shilton And English Media Disgrace Themselves

Diego Maradona was many things. He lived a life of excess, and not always in a harmless way. There are many books written and to be written on the character of Diego Maradona, and his cult of personality. First and foremost though, he was the best footballer most of us have ever seen. He is a God in his native country, worshiped like no other. There have been many bad men. There has only been one greatest footballer. It stands to reason that unique trait might lead the first line of his obituary.

Or if your country lost a match 34 years ago, maybe not.

In the myopic view of the English tabloid press (or at least their headline writers), Maradona's 60 years are defined by one moment; The Hand Of God. In the tournament that cemented his legacy as the world's greatest player, in the tournament that he led an average Argentina side to World Cup glory, and in the very match he scored perhaps the greatest World Cup goal of all time, one moment made him a villain in England for many years.

That's understandable in its own way. Thierry Henry, how are you? But time heals all wounds. English football fans have long since moved on - able and eager to cherish the majesty and beauty of Maradona's work.

The English press always prefer a villain than a hero though. They haven't been so quick to move on.

The Daily Star in particular have covered themselves in disgrace. On the death of a 60 year old man, with a  family, and literally millions of devotees, their front page headline pays literally no tribute to the man, but instead complains about a refereeing decision from 34 years ago.

But we can always expect the papers to do their thing. What you'd hope for is that former opponents, and fellow pros that witnessed what Maradona could do and understand how difficult it is to do, would be a little more magnanimous. Gary Lineker paid beautiful tribute on BT Sport's Champions League coverage last night. Unfortunately, Peter Shilton, long the outstanding bitter party of the Hand Of God affair, couldn't suck it up just this once.

Shilton, whose inability to jump off the ground arguably got England eliminated from two World Cups, described Maradona as having no sportsmanship in his Daily Mail column.

The former England captain and goalkeeper said he was saddened by Maradona's passing, and called him the greatest player he ever faced. That's where the compliments stop. He proceeds to complain for hundreds of words about Maradona's action, him getting blamed for not getting to the ball, his lack of an apology, and declares his second goal, the great goal, wouldn't have been scored if the first one was disallowed.

None of us expected what happened next. How could we? He challenged me for a high, looping ball, but knew he wouldn't get it with his head, so he punched it into the net. A clear offence. Cheating.

As he ran away to celebrate he even looked back twice, as if waiting for the referee's whistle. He knew what he had done. Everybody did — apart from the referee and two linesmen. I don't care what anybody says, it won the game for Argentina. He scored a brilliant second almost immediately, but we were still reeling from what had happened minutes earlier.

For the first time in the game, we let him get a run on us and he scored. It was a great goal but we were in no doubt — without the first goal he would not have scored the second.

It has bothered me over the years. I won't lie about that now. People say I should have cleared the ball anyway and that I let a smaller man outjump me. That's rubbish. He had the run on me but that can happen.

He wouldn't have punched it if he knew he could head it, would he? Of course not. So I am OK with all that.

No, what I don't like is that he never apologised. Never at any stage did he say he had cheated and that he would like to say sorry. Instead, he used his 'Hand of God' line. That wasn't right.

It seems he had greatness in him but sadly no sportsmanship.

And for all of it, Shilton has a fair point. It's a genuine gripe he's never been able to get over. It was a clear injustice. But there's more to life than football injustices. This surely wasn't the day for it, and despite his unique perspective, it was once again a chance for magnanimity crudely passed over in favour of villainous headlines.

Weirdly, after writing a column on the day of his death slating him for his attitude to an incident over 30 years earlier, Shilton then claims he hopes the hand ball doesn't taint his legacy.

I hope it doesn't taint Maradona's legacy. Like I said, he was a truly great player — up there with the likes of Pele.

Only in England, Peter. And there's more to life than England. 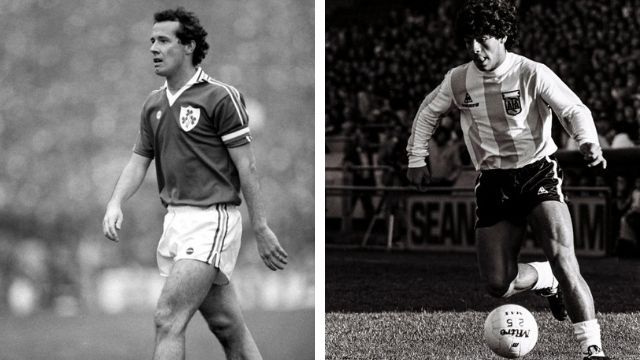