'And While I Grew To Slightly Dislike Phil Neville, I Now Fully Respect Him'

Some dislikes of professional footballers and managers are more than justified, such as Harry Redknapp for leaving a trail of destruction in his wake at various football clubs. Or, as a Southampton, supporter holding Peter Crouch responsible for the club's relegation in 2005  due to his inability to head to the corner flag to run down the clock, sentencing  Southampton to seven seasons outside of the Premier League by dropping two valuable points (Southampton finished 2 point from safety).

That still hurts over 12 years later.

However other distastes are a lot less understandable such as comedian Jason Manford  shunning Micah Richards in real life as Micah turned up late for a training session for Jason in Football Manager.

Somewhere in the middle of those two lies my intense rivalry with Phil Neville. I say rivalry, yet I'm sure he is not aware of it or me.

During the past Premier League season I managed to stumble across a Fantasy Football League called Pundits V Presenters. I looked through the table to recognise familiar names such as Matt Holland, Alan Shearer and Peter Schmeichel, whose team reeked of nepotism with son Kasper keeping goal for the entirety of the season. 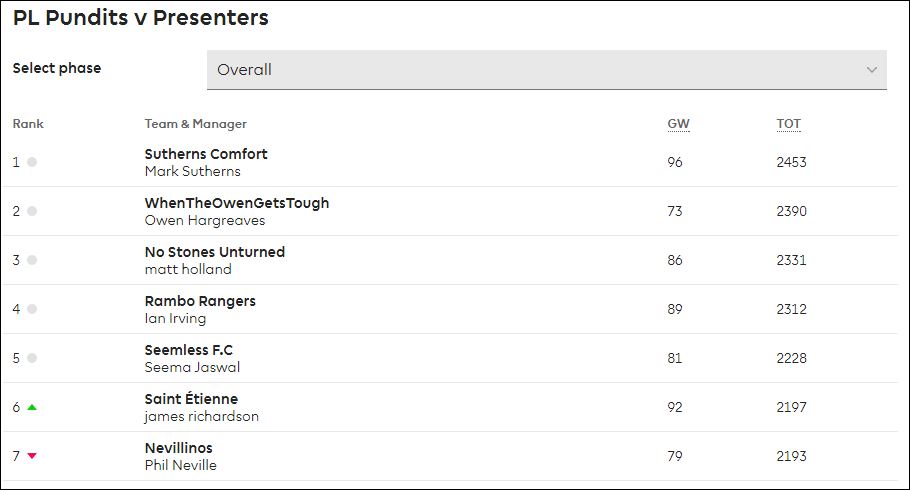 I was drawn to Phil Neville's team 'Nevillinos' as he had a score similar to my own and I then made it my mission to outscore him come the end of May.

This rivalry grew so intense I often found myself seeing some of Mr. Neville's tweets and exclaiming that he 'spend less time tweeting and more time concentrating on  'Nevillinos'.

Phil had been leading all the way until and I needed to do something drastic. Come Gameweek 34, I bought Negredo for Middlesbrough's double game week and captained him, I can only imagine Phil saw me coming and thought the same as he too bought Negredo but captained Palace's Andros Townsend for their double. Both failed miserably and at the end of that Gameweek, I was 105,000 places behind but only held 26 points fewer.

Some highlights of the run in were captain choices. In Gameweek 35 Phil bravely placed the armband on Rooney for 16 points, while I safely went with Aguero for 24 points, the next week we both backed Sanchez for 28 points.

Gameweek 37 saw us both use bench boost, while Phil kept the faith in Sanchez (54 points) and scored 182 points, I misstepped and chose title chasing Diego Costa (4 points) but still managed to rack up 178 points to keep my nose ahead.

Phil achieved 79 points while my score of 85 was enough to settle this grudge match in my favour by 23 points overall. 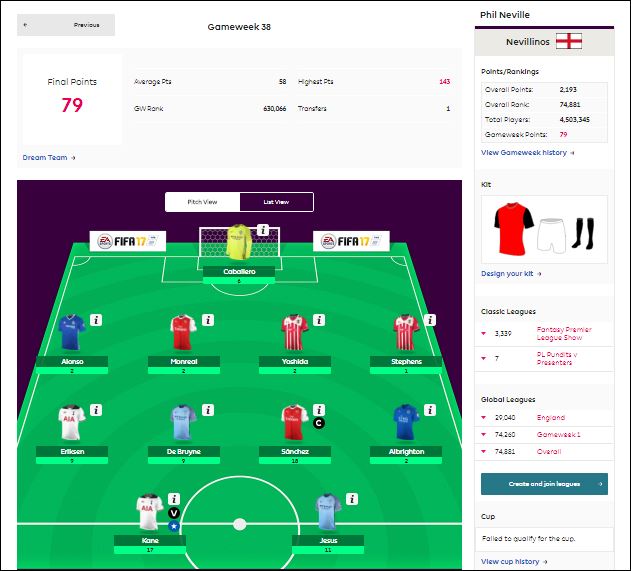 Phil proved a great adversary and while I grew to slightly dislike him, I now fully respect him and can't help but think he would have done a better job managing Valencia than his brother Gary and that this fan chant was more than justified.

Gary Neville on the funniest chant he has received from away fans 😂👏🏼 pic.twitter.com/oZScZ15I1d

It's unfortunate that this rivalry has likely died as I doubt I'll see his team again next season, but I issue an open challenge to Phil to renew this tussle if he wishes.