Tottenham manager Mauricio Pochettino has been charged with improper conduct by the FA after his bust-up with referee Mike Dean last Saturday.

Pochettino and his assistant Jesus Perez were enraged after their side's defeat, confronting Dean on the pitch, with the row continuing as the referee entered the tunnel area.

The incident occurred after Pochettino's Spurs side lost 2-1 to Burnley at Turf Moor. Pochettino has been charged with two counts of improper conduct announced in a statement from the FA this evening. 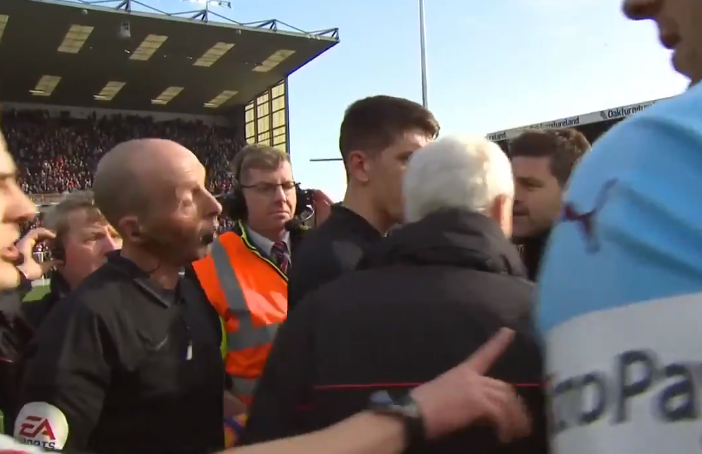 The exact details of what the Spurs manager said to the referee have not been revealed. Although he had argued with the fourth official during the match over the awarding of a corner in the build up to the Claret's first goal.

Mauricio Pochettino has been charged with two breaches of FA Rule E3 following the game against Burnley on Saturday [23 February 2019].

“It is alleged the Tottenham Hotspur manager’s language and/or behaviour at the end of the fixture – both on the pitch and in or around the tunnel area – amounted to improper conduct.

The Argentine manager admitted he 'crossed the line' and that he might apologise to Dean. On Saturday afternoon Pochettino suggested that he would not contest any disciplinary action brought against him.

I will accept everything that can happen from the Football Association but I hope they won't go any further.

If Pochettino decides to contest the charge, he has until 18.00 on Thursday February 28th to respond to the charge.

Football
8 months ago
By Gary Connaughton
Danny Murphy Thinks Pochettino Not Successful Enough For Newcastle Job
Football
1 year ago
By Balls Team
Jenas Believes Pochettino Should Aim Higher Than Arsenal For Next Job
Football
1 year ago
By Maurice Brosnan
Tottenham Sack Mauricio Pochettino As Manager
Popular on Balls
GAA
19 hours ago
By PJ Browne
'I Have Pictures Of Stephen Cluxton All Around My House, It’s A Bit Weird!'
Rugby
21 hours ago
By Balls Team
Son Of Offaly Hurling Legend Set For Super Rugby Debut
The Rewind
18 hours ago
By Sean Meehan
Introducing The Vote For Ireland's Greatest Singalong Song
Rugby
16 hours ago
By Eoin Harrington
Rob Kearney Player Mic Gives Great Insight On Western Force Debut