Why The Premier League Should Have Playoffs

Before I get started on this idea here is a disclaimer:

Yes, I am American, yes, you can make fun of me, and yes, a Premier League playoffs will likely never happen.

To be fair, I love the Premier League as it is now. It's a wonderful break from my frustrations with American sports (Hello to all the Mets fans out there!), but being able to experience the EPL (Editor's Note: No!) more first-hand in the UK and Ireland has ultimately given me more vexations. How can the main competition in a sport be over weeks before the end of the season? It's been a foregone conclusion for weeks, if not month. Where's the drama?

The Magic of American Playoffs:

Every league in the States has playoffs, even the MLS! Though some are more entertaining than others, the premise of each competition remains the same: survive to make the playoffs, then win the games that matter at the end of the season to win the championship.

In European soccer leagues, is the opposite.  While the idea is the best team over the course of the year wins gets the big prize, where's the excitement in that? Does it really matter than Chelsea have a better record against Crystal Palace than Tottenham?

For me, the idea that best overall record -- i.e, in the Premier League, most points -- means you lift your competition's trophy is ridiculous. What if you win the league by only beating up on the poorer teams? What if you can't beat the best teams in the league?

It's all boring to me; the league usually limps towards May, a trudge through the English mud and rain, because we tend to know the league winner already.

Here's an interesting list, which ranks the last 10 Premier League champions on what percentage of their total points came from matches against the rest of the top 8.

Of a possible 42 points available against other teams in the league's Top 8, only three teams won 30 or more. I find it unfair that all ten of these league winners raised the same trophy. Only a few of them truly dominated the best of their competition. In 2008/09, Manchester United's record against the rest of the top 8 was 5W 5D 4L. That's not very good, right?

If we had a playoff in 2009, would United have won the league or would a better team have come through?

In the NBA, the regular season lasts 82 games, certainly enough to figure out who the "best team" is, right?

Wrong. Since 2000, only 5 NBA teams with the best regular season record went on to win the title. Last year, the Golden State Warriors won 73 games, an all-time record, but lost to LeBron James and the Cleveland Cavaliers in perhaps the best NBA Finals in decades. The series, in which the Cavs overcame a 3-1 series deficit to give Cleveland its first major championship since 1964, was one of epic proportions and sensational history. Without playoffs, the NBA would be desperately lackluster.

All For One, One For All:

Last year was a wonderful break from the norm with the magnificent title rub of Leicester. Beyond that miracle though, the league is terrible predictable.

Before last season, only five teams -- Arsenal, Liverpool, Chelsea, Manchester City, and Manchester United -- have been in the title race in the last ten years.

In the four major American sports with playoffs, these numbers are much, much higher.

In that same ten years, 14 NHL teams have competed in the Stanley Cup Finals, 9 have played in the NBA finals, 13 in the Super Bowl, while baseball's World Series has also seen 13 teams compete.

This is an issue. The spread of teams competing in the Premier League is terrible and creates a stale and predictable product.

In America, everyone has a chance. Every season sees so many teams -- big market or small -- end their year with heartbreak. Playoffs don't only intensify the competition, but create more beautiful sports emotion -- more memorable moments, more history, more chances to shout to the sky how much you love your team.

Having to toil through each opponent, through the best teams in your competition is a journey which never gets old. When it happens to you, it's an unthinkable experience; for weeks on end, all you care about in the world is your team.

That, my Irish friends, is how a championship should be won, by having to outclass the best teams at their own game. By having to work insanely hard, not just overwhelm a league with expensive talent. Everyone should have a chance.

Well, You Stupid Yank, How Would This Work?

There are two ways to do this. One is fairly simple, the other a bit more complicated, but hear me out.

The first playoff system would see the Premier League end after 30 match weeks. By that point, most teams are quasi-locked into their final table spots anyway, and we don't want the playoffs to last through the summer. If the playoffs included the top 10 teams, it would mean a few smaller clubs would be able to sneak in.

Also, every matchup will be ONE LEG ONLY. I hate the away goals rule, and one leg means the best teams would get to rightfully play in front of their own fans. Nothing makes for impassioned football like a winner-take-all game.

Had the 2016/17 campaign ended after 30 match weeks, the playoffs would look like this: 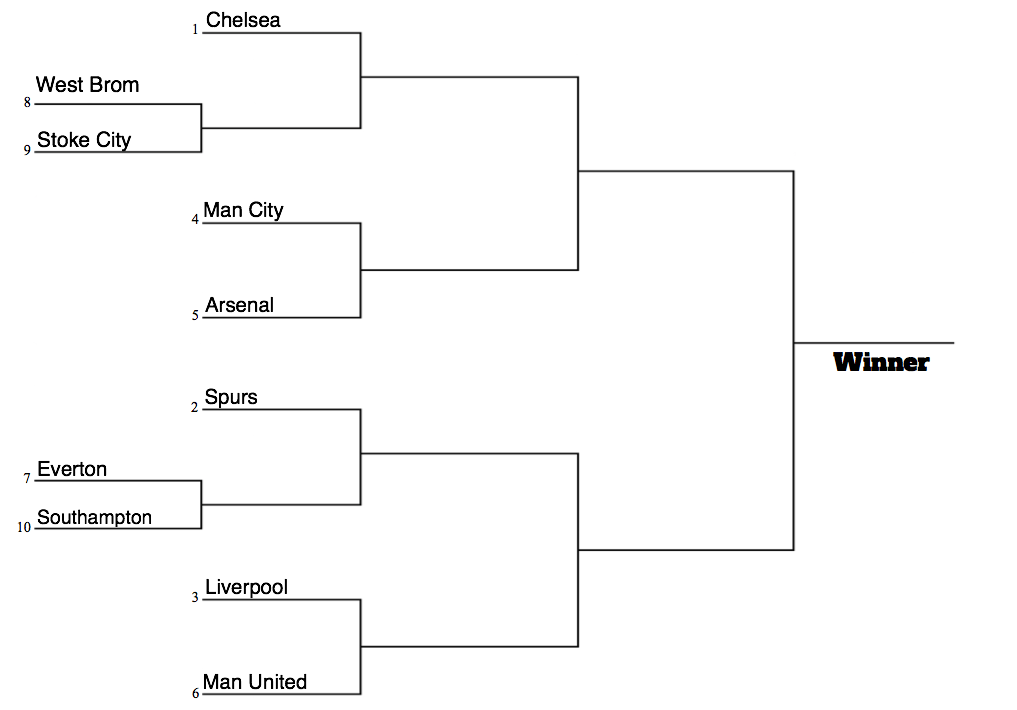 Seems fair, right? Obviously, the fixture list would have to be adjusted to account for everyone having a fair schedule, but it's unlikely they places would change too much. It's likely this tournament would result in a Spurs-Chelsea final anyway, which would be awesome. A Tottenham squad dubbed by many as the best in club history surely deserves a chance at a title, no?

Also we'd have another chance to say goodbye to The Lane.

This idea comes straight from the American sports playbook.

What if we divided the Premier League into two conferences, North and South?

It would be fascinating. Of course, promotion and relegation complicates things, but the 2-conference scheme creates an insane possibility -- the top 8 in each conference advance to a playoffs while the bottom four fight in their own four-way tournament to decide who doesn't get relegated. Because there are 16 teams in this tournament, there probably isn't enough time for two legs per matchup.

Again, if this season ended after 30 match weeks, it would look like this: 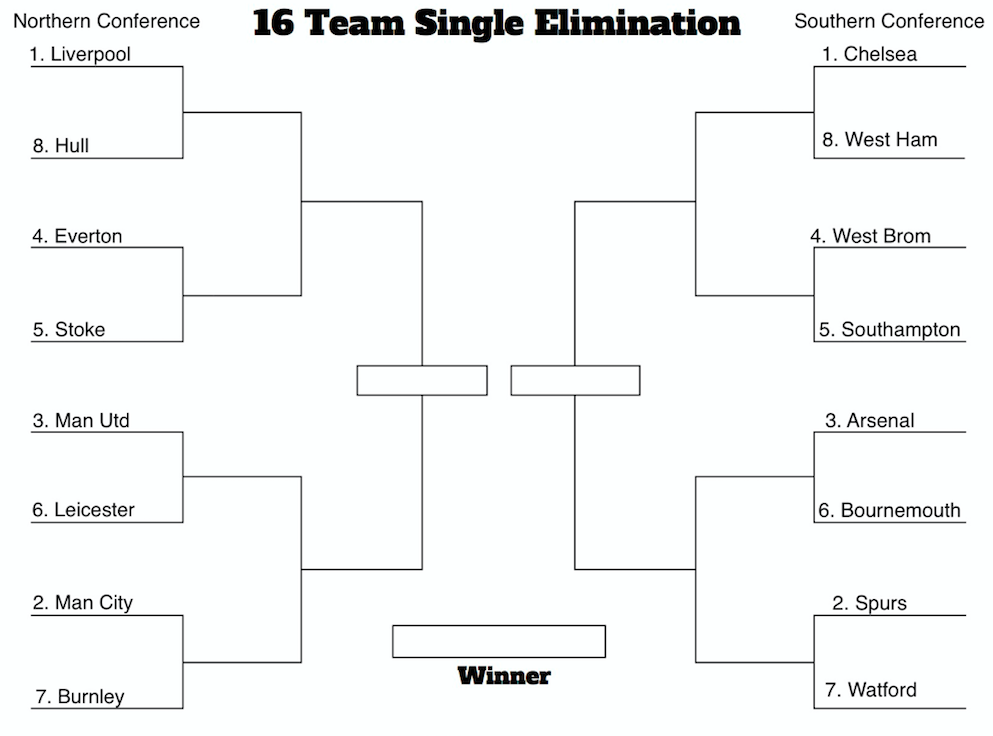 I'm so happy right now. I love America so much.

Also, the relegation tournament would look like this (Palace and Boro are home teams): 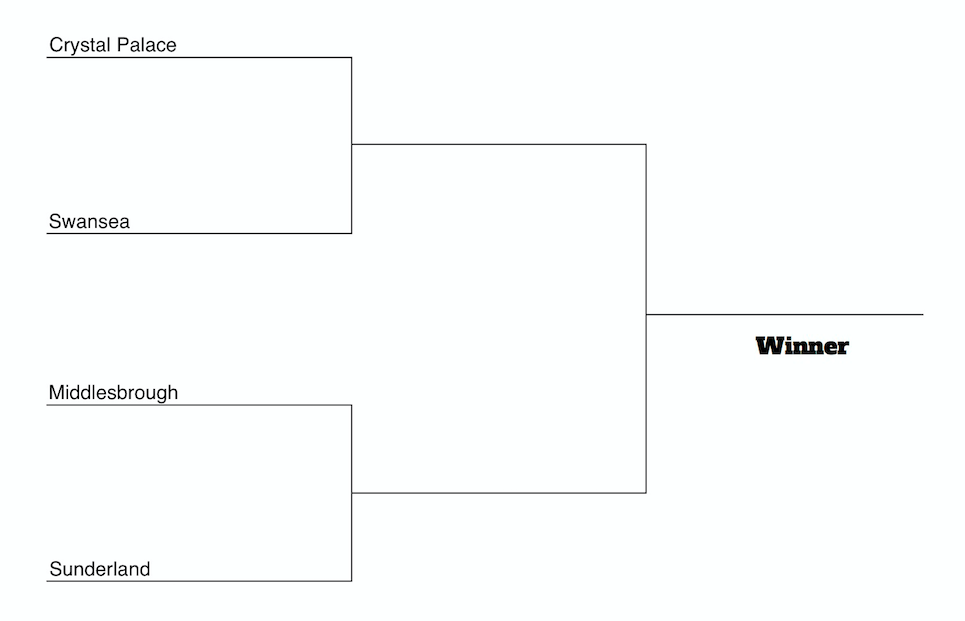 This, at the end of the day, is the greatest way to decide a champion. Every team must go through the same, grueling test of will and character. Here, in the Premier League's case, all you need is to win four games in a row -- the last of which should be a Super Bowl-style celebration at a neutral field like Wembley.

Look at all the juicy potential matchups. Up North, there's a potential for the second round to have a Manchester and Merseyside Derby. The South has potential shockers, too -- Bournemouth over Arsenal, perhaps?

A tournament like this may not only transform the English Premier League into a legendary epic of a competition, but also induce an increasingly global market into ecstasy. It would be so so so entertaining.

And, you never know, Americans might get even more into soccer - not that you care about that!

Football
1 year ago
By Paul Moore
Dublin Will Have Two Sports Flea Markets This Weekend With Retro Jerseys On Sale
Football
6 years ago
By Ricky Mooney
The Cash That Sports Stars Are Getting For Sponsored Tweets Will Truly Sicken You
Golf
7 years ago
By Conor O'Leary
Tell Us The Sports Books That Need To Be Written
Popular on Balls
Football
19 hours ago
By Luke Delaney
Obafemi In As Stephen Kenny Names 27-Man Nations League Squad
GAA
2 days ago
By PJ Browne
How A Kerry Guard Ended Up Playing For The Tipperary Footballers
Football
17 hours ago
By PJ Browne
Five Things Learned From Stephen Kenny's Nations League Press Conference
Motorsport
1 day ago
By Eoin Harrington
F1: New Team Radio Clips Show Sergio Perez Frustration With Team Orders In Barcelona