Presenting The Balls.ie Premier League Team Of The Weekend

If you took Chelsea out of the equation, only two points would separate the top five in the table... imagine how much more of an exciting title race that would be!

But they’re not out of the equation, they’re storming even further clear at the top. A tricky Burnley side gave them a test, while Liverpool dismantled Spurs. We looked through all the stats and facts to bring you our team of the weekend.

The Balls.ie Premier League Team of the Weekend 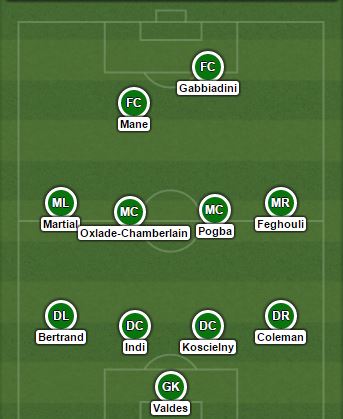 Considering that Romelu Lukaku has been destroying seemingly everything in his path recently, Valdes’ three key saves against the Toffees earns his place in this side.

There must be a European qualifier coming up because the Irish had a serious weekend. Not just in front of goal either. Coleman made a last man tackle to deny Boro a winner and was pretty accurate with his crosses onto the head of his big Belgian forward.

The French stalwart had seven clearances and four interceptions, more than any other player on the pitch. Granted, Hull didn’t really threaten much but you can only head away what’s put in front of you.

This was a toss up between Bruno and Lucas. We went with the Stoke defender as 11 interceptions is the highest we’ve seen this year so far. To win two headers against Christian Benteke is also no mean feat.

Playing three at the back is okay if you’ve a good strong backline. Like Chelsea for example.

It’s less successful if you don’t. Like Sunderland. Their right wing was tormented all day by Southampton, with Bertrand chipping in with an assist and four crosses.

@ryanbertrand3 You sir are all we love at Saints. Loyal. Honest. Proud and brilliant. Thanks for being one of us. Now go bring that cup home

Goal? Check. Assist? Check. Another disallowed goal? Oh yes. Despite the best efforts of Nyom, West Ham still broke past the Baggies twice. Feghouli had a hand in both, finding the net before assisting Manuel Lanzini’s lead goal.

Pogba has settled in well to Premier League life. More passes than any of his team mate. An 85% pass success rate, two take ons, three tackles and won four aerial duels as the Red Devils wore down Watford.

When Oxlade-Chamberlain isn’t focused on his twitter, he can actually be a pretty good footballer. Five successful dribbles, an 85% pass success rate and a close to standing ovation from the Emirates as Arsenal handled the Hull task well.

We got what we needed today! ???⚪️ #COYG #Arsenal #AFCvsHCFC @premierleague pic.twitter.com/BRK4Vll5cl

Martial only lost possession three times as he gave Craig Cathcart a torrid time in Old Trafford. The Frenchman sent out a message to his detractors off the pitch this week. He answered any further critics with a goal and an assist.

This one was obvious. Liverpool absolutely dominated Spurs at Anfield with wave after wave of attack. Their main point going forward was: get the ball to Sadio. Two early goals rocked Spurs and set the Pool on their way.

Do we really need an explanation? The Italian has scored in five consecutive games and three goals in his first two appearances for the Saints. Which backs up his transfer fee from Napoli on deadline day.

Very happy for the double, but even more for the win! #SaintsFC ?⚪