During the summer of 1998, the St Patrick's Athletic U-21 manager, a 26 year-old called Stephen Kenny, requested an interview with the chairman of Longford Town, Michael Cox. The new chairman had assumed the position for the sole reason that everyone else had run a mile from it. He felt duty-bound to take the position, in an interim capacity at least.

The 26 year old from St Pats brought with him a dossier on the midland club, said he had a clutch of decent youngish players under his wing and declared his desire to manage Longford Town. His enthusiasm blew the non-existent competition away.

Kenny landed in Strokestown Road in the summer of ‘98 to the sound of resounding indifference.

In the years before his arrival, Longford Town paddled around the nether regions of the First Division, winning the odd game in ten.

They were veterans when it came to the business of 'seeking re-election.' This was the wondrous process whereby the team who had finished last in the First Division the previous season stayed up on the grounds that no one else wanted to come up. 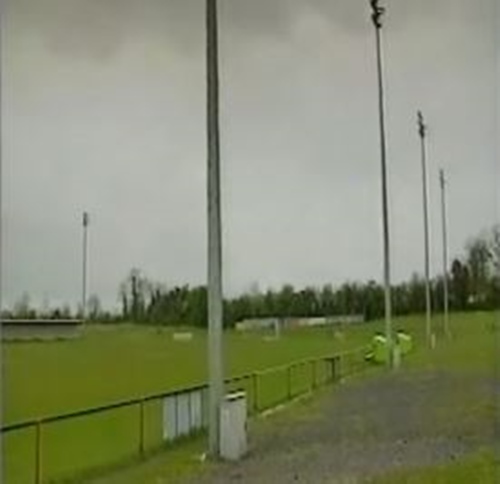 Crowds regularly dipped below 100 in those days. The crowd was split 80:20 between middle aged men and ten year old boys.

The small hardcore used to cluster around the small spot between the two dugouts. In truth, we (the 20 percenters) only half watched the matches. There was a practice pitch at Strokestown Road behind the sheltered side of the ground. After a while, someone would snaffle a football from somewhere and we’d spend most of the match out there kicking a ball around in the darkness.

If you were in a particularly patient and earnest mood, you might hold off until half-time. On the rare occasions when Longford scored, you’d have to lie later on and say you saw it.

Kenny's predecessors in the Town dugout included the raspy-voiced Dermot Keely, who went on to win league titles with Dundalk and Shelbourne, the towering midfielder John Cleary, and Michael O’Connor, who did brilliantly in charge of Athlone Town in the early 1990s, but had a less profitable spell at Strokestown Road.

It was the era of the player-manager, where thinning resources meant any manager within reasonable proximity of his 40th birthday could not afford to be overlooking himself for selection - either in the case of an injury crisis or a bad player crisis.

On the first day of the 1995/96 season John Cleary sprang himself from the bench to score a fantastic last minute header to snatch a draw with Limerick City. The game was memorable for Limerick’s flamboyant striker Tony Izzi and his interaction with the Longford Town crowd.

The compulsively theatrical centre-forward (I can't remember if he was English or Italian - I think the latter) was a classic villain for a small-town League of Ireland crowd. He got the crowd's back up early on by walking out on the pitch with an absurd pony-tail. He then proceeded to get involved in some argy-bargy with a couple of Longford Town defenders, all the while pouting and gesturing in the direction of the crowd and the referee. Midway through the second half, he added insult to injury by scoring a preposterously flashy goal (it was a bicycle kick of sorts). I remember Izzi principally because the game marked the first time I heard the word 'wanker' shouted in a public place (or a private place for that matter).

Cleary's successor, Michael O'Connor, wasn't averse to throwing himself into the action, combining his role of manager with that of the silver-haired centre-forward who used to be fairly handy (a very common type of player for Longford Town in those years). 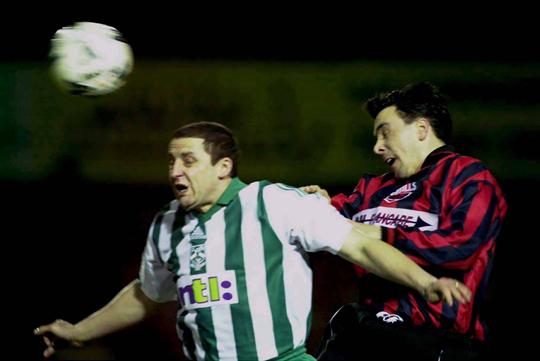 The Bord Gais National League Premier Division meant serious glamour to us in those days. The idea that Longford Town could be there, participating in televised games on a Friday night - we didn’t even dream that. The big players and managers were celebrities to be pointed out in hushed tones on the rare and strange occasions they descended on Strokestown Road.

One time, Pat Dolan was down for a League Cup game in 1998. St. Pat's won the League that year, after Damien Richardson's Shelbourne ballsed it up in Dundalk on the final day. (Oriel Park was the nightmare place to go needing a result. Bohs had messed up there on the final day a few years previously).

Myself and Duffy were at the game (if not exactly watching it) and went up to him, essentially boasting that we knew who he was. Convention insisted that the prize for this for two ten year olds, was some sort of modest monetary reward. Amused by our approach, Dolan whipped a shiny pound out of his pocket.

Brandishing the silver goods, he asked Duffy who he supported. Duffy eagerly blurted out the name 'Manchester United' and reached out for the dough. Easiest money he ever made.

Wait on a minute.

Dolan pointedly withheld the pound coin and, adopting something of a 'gotcha' tone, asked Duffy again who he supported.

Rocked by this turn of events, Duffy looked at me, unsure as to what trick Dolan was pulling here. It was a confusion I shared. Dolan reminded us in a moralistic fashion that we were from Longford and at a match between two League of Ireland clubs.

Catching on, I told him I supported Longford Town. Pat pronounced me the winner and presented me with the pound. I guiltily accepted, for I would have given the exact same answer as Duff had he not got there first.

Feeling understandably hard done by, Duff belatedly informed Dolan that he too supported Longford Town. I can't remember if Pat relented and gave him a pound as well, though I suspect he did. Either way, despite our financial windfall, we went away from our encounter with a big-time celebrity feeling rather chastened.

After a couple of good years under Keely in 1993 and 1994, where the Town finished in a thrillingly respectable fifth place, they proceeded to plummet down the table. By the summer 1998, things had reached a sorry pass.

In the 1997/98 season, they finished bottom of the table having earned twelve points from twenty-seven games. They went the entire season without recording a home win and scored a dizzying total of twelve goals. Their strapping centre-half Conor Frawley emerged as their main goal-scoring threat after posting what turned out to be an unassailable tally of three league goals all season.

Into this Theatre of Ennui, Stephen Kenny arrived.

To any of the tenacious souls who followed the Town from the mid-1990s onwards, the latter part of 1998 was an extremely disorientating period. A team who managed to scrape the odd win once every dozen games (in a decent spell) for the previous few seasons began to win games relentlessly.

Limerick were beaten 3-0. Home Farm were dispatched 2-0. Monaghan were disposed of 2-0.

They had a raft of new players. Stephen O’Brien had replaced Andy ‘Jelly’ Keenan as goalkeeper and would become a fixture between the posts for almost a decade. Wesley Byrne, whose speciality was hitting powerful but often wild dead balls, captained the side from left back. Vinny Perth was a busy, tenacious midfielder, and best of all was his brother Paul, whose personal transformation made the team's revival seem run of the mill. He emerged as the team's top scorer and earned the player of the year award.

Kilkenny City came and lost 3-1. Athlone were beaten by the solitary goal.

The town at large was slow to pick up on the fact that Longford Town no longer lost every week. Crowds remained small. There was a familiarity between the management and the tiny band of supporters, even if they didn't quite know all our names.

St Francis were dealt with handily 2-0. Cobh came and couldn't cope. Another 2-0 win.

The quickest way to leave the ground was to walk across the pitch, through the tunnel behind the goal which led into the car park. The dressing rooms in a small stand alone building, looking on the car park. As we left, you'd see the players milling about inside, beginning to get changed. And Kenny used to stand the door, smiling after the latest win - like the proprietor of a guest house, bidding you adieu and asking you if you enjoyed your stay.

By Christmas, the Town found themselves on top of the First Division. Supporters used to moral victories and consoling themselves with black humour, were suffering from vertigo. The side’s form tapered off somewhat in the new year and they finished the season in 4th place, a performance with which we were still chuffed. 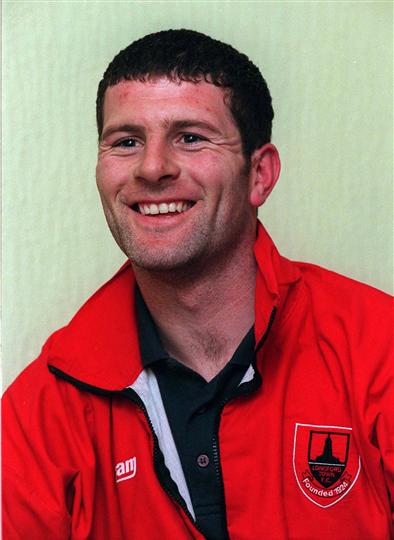 Kenny’s difficult second album, the ‘99/’00 season, turned into a glorious triumph. The natural order of things never reasserted itself. The only difference between that season and the previous season, was that the team's form held steady all year.

The strike-force was strengthened that summer.

Joining him in the attack was the returning Richie Parsons, shorn of his 1980s’ Liverpool-style moustache and flowing locks. The last prolific striker we had before O'Connor, Parsons had been the standard-bearer for the Longford Town strike-force during the Town’s comparatively successful 1992-94 period.

Longford Town were promoted to the Premier Division, narrowly missing out on the title behind Bray Wanderers. The Town sealed promotion with a 2-0 away win over Cobh Ramblers. Approximately three-quarters of the crowd that day (600 from 800) were Longford Town supporters. The average home attendance circa 1997 was forty.

The first season in the top flight began with a magnificent 1-0 win over Derry City in the Brandywell and ended with the side comfortably ensconced in mid-table and facing into an FAI Cup final against league champions Bohemians. Tony O’Connor clinched victory for the Gypsies that day.

Kenny was eventually prised away from Longford Town by Bohemians halfway through the 2001/02 season. Under Alan Matthews' superb management the Town would go on to win back-to-back FAI Cups in 2003 and 2004.

However, Stephen Kenny remains the pivotal figure. When he arrived at Strokestown Road, the place was a wasteland. By the time he left, we had an all-seater stadium and European football.

This year, Longford Town were promoted to the Premier Division for the second time, after an absence of seven years, and Stephen Kenny's Dundalk stand on the threshold of claiming the Premier League title a mere two years after the club's existence looked to be in jeopardy.