PSG are gaining somewhat of an unfortunate reputation for their tendency to collapse on the biggest occasions in the Champions League. 2017 saw them throw away a 4-0 lead to Barcelona, while 2019 saw a makeshift Man United team claw back a 2-goal deficit to knock them out on away goals.

They didn't throw away a lead in this year's semi-final defeat against Man City, but the way their players lost their heads in both legs of the tie was yet another moment in the long and arduous history of PSG collapses in Europe.

The Parisians have crumbled in the knockout stages several times over the past few years, but most of those occasions came when they led from the first leg. This year's semi-final second leg saw them attempting to come from behind themselves, after a 2-1 defeat in the first leg to Man City.

Even that first-leg defeat came with some acrimony, as PSG threw away a 1-0 lead to lose 2-1. City's second goal came from a PSG mistake, as their wall split for a Riyad Mahrez free-kick, and then Idrissa Gana Gueye was sent off for a horrific challenge on Ilkay Gundogan. Not exactly the best start to the tie.

"Gets worse every time you see it. That's an absolutely disgraceful challenge."

Idrissa Gueye sent off for a terrible tackle on Ilkay Gundogan#PSGMCI | #UCL pic.twitter.com/UuNjob4V80

PSG were immediately up against it in the second leg, as their talisman Kylian Mbappé missed out on the starting lineup through injury. They would be heavily reliant on Neymar and Angel di Maria from the outset, and needed big returns from both.

What ensued was far from a masterclass from the two South Americans, as City's defence instead shackled their creativity and stopped them from playing. PSG made a few chances early on, with Marquinhos hitting the bar, but City were in front just over 10 minutes in, with Riyad Mahrez scoring with a neat finish from inside the box.

Riyad Mahrez puts Manchester City 3-1 up on aggregate in the semi-finals of the #ChampionsLeague - live now on @RTE2 and the @RTEplayer https://t.co/sN14OH6uTT #RTEsoccer pic.twitter.com/GRuGmoNDAs

PSG's collapse accelerated dramatically from there. They failed to mark a single shot on target in the entire game, as City completely shut down their slick passing game and nullified their threat going forward. PSG missed Mbappé's ability to get in behind and make chances, but their other dangermen offered little across the course of 90 minutes.

It was Man City who played the best football and they scored again with a stunning counter-attacking goal, as PSG's attacking play became more and more desperate. It was again Mahrez who scored, as City romped to a first ever Champions League final.

It wasn't over yet, though, as Angel di Maria was sent off for a petulant stamp on Fernandinho as he retrieved the ball for a throw-in. It was a moment of madness from a player who stood out in the first-leg for PSG, and it summed up their night. They showed flashes of brilliance in their ability to get out of tight spaces, but they offered nothing in the way of attacking threat and lost their heads at the most important moments.

Di Maria was the lucky one, though. Many PSG players appeared to be trying their hardest to get sent off in the closing stages, with Marco Verratti, Danilo and Prsenel Kimpembe all flying in with wild challenges in the aftermath of the Argentinean's red card. Richie Sadlier questioned their mentality in his post-match analysis, pointing to those challenges and suggesting that at least one of those players should have been sent off.

We used to play a game on FIFA where one person would have to try and win the match by full-time while the other person was trying to get enough players sent off for the match to be abandoned before the final whistle. That feels like what's now happening here.

What PSG should be ashamed of, though, is the manner in which they lost. Their team lost their heads in both legs, with challenges flying in from all angles - they were arguably lucky to finish the game with 10 men on Tuesday night. The infamously hot-headed Neymar was astonishingly the voice of reason as the second-leg came to a close, attempting to calm his teammates down.

This is a brilliant PSG team. Last year appeared to be a turning point, as they fought their way past several top teams to reach the Champions League final, where they narrowly lost to Bayern Munich. This year they avenged that defeat in the quarter-finals, having already knocked out Manchester United and Barcelona. It really felt like they could give the final stages of the Champions League another go and that their mentality had shifted.

PSG were a "rabble" by the end of their defeat tonight and have again paid the price for a culture indulgence, says @RichieSadlier #RTEsoccer pic.twitter.com/riJj5aOVhc

Maybe it's harsh to put this defeat in the same light as the Remontada of 2017 or Man United's unlikely triumph in 2019. But it doesn't feel like this PSG team has matured in the aftermath of those defeats, even after a Champions League final appearance. Manager Mauricio Pochettino has a big job on his hands to salvage the group mentale from here.

In fairness, you would lose your mind playing against this Man City team. They are just too good and will probably go on to win the whole thing. Still, they'll probably have a much tougher game in the final than they did against PSG in the second-leg of the semi-final.

SEE ALSO: Alan McLoughlin Once Did The Soundest Thing For Roy Keane 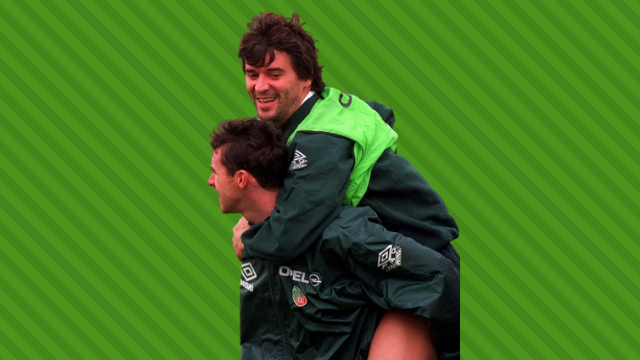 Football
1 week ago
By Gary Connaughton
Report: Manchester City Leading Race To Sign Ireland U19 Forward
Football
3 weeks ago
By PJ Browne
Stephen Ireland Explains Infamous Superman Underpants Celebration
Football
3 weeks ago
By PJ Browne
Jack Grealish: Pep Guardiola Would Have Loved Stephen Ireland
Popular on Balls
Rugby
2 days ago
By Colman Stanley
Keith Earls Shares Story That Captures Andy Farrell's Decency
Football
2 days ago
By Eoin Harrington
Quiz: Name Every Player To Score In A Champions League Final
Football
1 day ago
By PJ Browne
'If He Continues With Performances And Goals Like That, Stephen Kenny Will See It'
Football
14 hours ago
By Gary Connaughton
Portsmouth Likely To Retain Gavin Bazunu This Month Despite Championship Interest