What Exactly Is The Role Of Football Pundits In The Social Media Age?

Amid all the clamour surrounding Ole Gunnar Solskjaer's job security at Manchester United, plenty of the focus has been on the pundits for Sky Sports, BT Sport, RTÉ, and co. and what they think should be done about the situation at the club.

The continuing frenzy around who has and hasn't called for Solskjaer's head raises one crucial question: what exactly is it that we want from football pundits in the modern age?

Football pundits are expected to say what we want them to

The fanfare around punditry has become almost as much of an event in modern football as the game itself. Sky Sports and BT Sport have certainly contributed to this in some way, with Saturday's Manchester derby a prime example of this.

Sky, availing of an unusual opportunity to broadcast the early kick-off, began their coverage at 11:30am, and then ran a full half-hour past their scheduled programme close to go off-air four hours later at 3:30pm. Four hours of football programming - with a mere 90 minutes of that devoted to actual football.

And, we can't lie, we're absolute suckers for it. Roy Keane's analysis of any Manchester United game is now must-watch, while Didi Hamann and Richie Sadlier consistently bring life to RTÉ's Champions League and international coverage.

There is, of course, the clamour for social media content that comes with these names gracing our screens every week (in some cases, multiple times a week).

But what exactly is it that we want from football pundits? Why is it that we feel captivated to watch Roy Keane feign looking irritated by Micah Richards' mere presence? What is it about Jamie Carragher and Gary Neville's debates on Monday Night Football that move us to give up the first evening of our weeks to hear them tear apart a clash between Arsenal and Crystal Palace?

The question has reared its head in a very different form in recent weeks. With Ole Gunnar Solskjaer's job under pressure at Manchester United, fan attention has turned to the cohort of his ex-teammates currently serving as pundits.

The likes of Gary Neville, Roy Keane, Paul Scholes, and Rio Ferdinand all regularly grace our television screens with Sky and BT respectively - but they also all shared a pitch with the current Manchester United manager.

In recent weeks, Neville in particular has faced increasing criticism from fans on social media for refusing to call for his ex-teammate to be sacked. A quick look at the replies to Neville's most recent tweets about the situation at Man United will show the almost mob-like mentality of fans who don't want to hear anything other than the words "#OleOut" from his lips.

It was most plainly seen this week under a tweet in which Neville called for more action from the Premier League to support homeless charity Shelter.

Imagine refusing a request to raise money and awareness for homelessness . A Johnson like u-turn on its way if the clubs push hard ! https://t.co/afQIRL3ROw 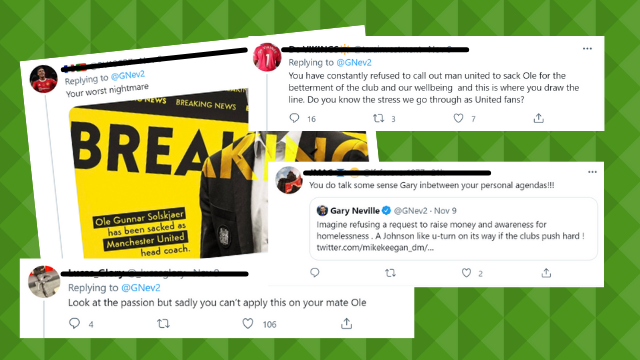 Neville has continually criticised the power structures at the club - famously standing behind fans in April at the height of the Super League controversy - as well as several of the team's players, but he has stopped short of calling for Solskjaer's head.

The big question is: do we really need him to?

The questions over Neville are perhaps justified. Things are not improving under Ole Gunnar Solskjaer, and it is becoming more and more tricky for the Norwegian to hide behind buzzwords such as "progress" when the team are quite clearly falling behind their rivals, despite the wealth of talent at their disposal.

That being said, all of those criticising Neville for his hesitancy to call out Solskjaer have all clearly made up their mind (with good reason) what they think of the United boss. Solskjaer appears to be taking Man United nowhere fast, and those fans and fellow pundits have made their minds up that he is no longer the man to be trusted with the club's future.

So, why do we need Neville, or Keane, or any of Solskjaer's ex-teammates to tell us what many have already accepted? Is it an inherent need for validation from those who "know their stuff"? As the Manchester United man moves closer to the exit door, do some punters need the vindication of his ex-teammates saying they were wrong all along?

At its core, it screams of a need to have pundits say exactly what you want them to say at all times. It is reminiscent of the infamous fan reaction to the 2017 Star Wars instalment, The Last Jedi, which many fans turned against because (among other issues) Luke Skywalker was a grumpy old man in it and he wasn't a grumpy old man in the 1970s. This smacks of an inherent need for the things you watch and consume to agree with you and what you expect from them.

The Neville fiasco all plays into the increasing problem with pundits in football. There is a balance to be struck between nuance and entertainment when it comes to these things - after all, we wouldn't watch two and a half full hours of pre-and-post-match analysis if there wasn't something to be gained from it all in terms of entertainment.

Think back to the golden age of the RTÉ panel (oh, how we long for those days). Eamon Dunphy, Liam Brady, and John Giles struck the perfect balance between genuine in-depth analysis and entertainment - and, most importantly, they all presented different opinions.

Just take a look at the infamous discussion from April 2008 when Dunphy called Cristiano Ronaldo a "disgrace to the game" and, even more famously, a "cod". Given Ronaldo scored 42 goals in all competitions that season, it was a bold statement, but it kickstarted a gripping discussion between the three about how much importance Ronaldo's antics of diving, whinging, and the like should be given against his obvious footballing ability.

It is perhaps not the legendary "cod" line from Dunphy that stands out in this context, but rather this line about the nature of the discussion that sums up the problem with modern punditry. When host Bill O'Herlihy prods Dunphy that his viewpoint is extreme, Dunphy rather passionately replies:

That's what I believe. Am I here to express my beliefs?

The nature of football punditry has changed immeasurably in the social media era. Gone are the days when the "beliefs" of the likes of Dunphy, or Giles, or Brady - or even Gary Neville in the early days of Monday Night Football - would be awaited as gospel for the football-watching masses. Nowadays, it's all about the next soundbite for social media and, for many fans, it's about getting those pundits to say what you hope they're going to say.

At its core, we watch football punditry to get the opinions of people who know the game inside out. That's not to say they don't have gaffes - nobody could say with a straight face that Eamon Dunphy always gave the most nuanced or fact-driven opinion - but the discussion, clash of opinion, and different perspective is what makes football pundits doing their job worth the huge amount of hours devoted to it week-in-week-out.

I believe if Ole leaves Manchester United now, he walks away with his head held high… we discuss in depth today!

It may well be time for Ole Gunnar Solskjaer to say "fair enough" and pass the baton on to a new manager to take charge, as his former Man United teammate Rio Ferdinand suggested this week.

The reaction to Ferdinand's comments online supports the thesis that football fans just want pundits to agree with them, as his comments have been celebrated by the #OleOuters of the Man United fanbase as a moral win of sorts.

In the era of social media, it's getting harder and harder for pundits to simply express an opinion, without vitriol from fans who were hoping for something different.

Sure, Gary Neville may be wrong about Solskjaer. But, you know what, if I'm going to bother myself with watching a bunch of lads sit around and talk about football for up to an hour after a game has concluded, a bit of disagreement, controversy, and difference in opinion is what's going to make that all worth my time. 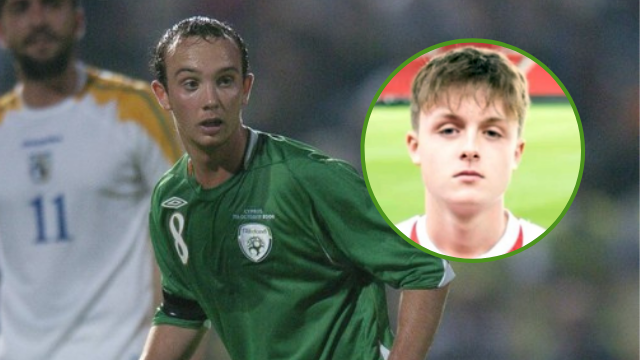