The Two Minutes At Wembley That Defined "Put 'Em Under Pressure"

When we think of the great Irish football team of late 80s and early 90s, we think of "Put 'Em Under Pressure" - not just the song, but the entire philosophy. For good or bad, it defined Ireland in that era. The purists may not have liked it, and it might not have made the best use out our top players, but we also never experienced success like it.

Ireland's tactics weren't always long ball, but it was always fast ball. There was no dwelling on the ball, allowing defenders to settle. Centrebacks were constantly on edge, constantly being turned or dragged into corners when Ireland had the ball. When the opposition had the ball, they were harried and harassed, rushed into making mistakes.

On The Charlton Years film, released in 1996 after Jack's reign ended, Charlton speaks with some bitterness about how "pressing" became a part of football vernacular. A word invented by "the FIFA guys", according to Jack, to deny Ireland credit for bringing it into international football. Nowadays, everybody does a bit of what we did then. But in the late 80s and early 90s, teams didn't know how to deal with it.

"They call it pressing," says Charlton with some disdain. "We called it putting people under pressure."

The greatest example of this philosophy might have been at Wembley in March, 1991. Ironically, Euro 92 was the one tournament for which Ireland didn't qualify for from the four in that six year span, but it was also the campaign when this group of players were at their absolute peak.

Having gone a goal down to the World Cup semi-finalists in our fourth meeting in just three years, Ireland dominated England for a half hour at the home of football.

Before Niall Quinn's equaliser there was what George Hamilton called "an astonishing period of Irish pressure" that epitomised everything that was good about Jack's "put 'em under pressure" style. Just watch the clip below. The desire of the players to be first to the ball is astounding. Once they get it, they move it on. The English defenders, flustered and harried, continuously give the ball away and the boys in green come again.

This is what Jack brought to Ireland. A system the players believed in and could get behind. A system that rewarded out-thinking and out-working the opposition. A system that gave an Irish team the confidence to go to Wembley and dominate England.

Will we ever see the likes of it again?

SEE ALSO: When Bertie Ahern Was Mercilessly Booed At The 1992 Boxing Homecoming 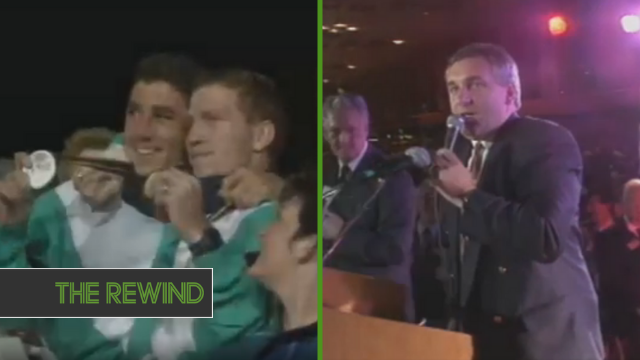