Qualification Permutations After Georgia Do Ireland Huge Favour Against Danes

What a bloody result! As this qualification campaign advanced, you got the feeling someone was going to have to do us a favour. While Ireland had secured a couple of decent results, they were still teetering on the brink of being eliminated from contention.

Now everything has changed.

The Georgians, the sound bunch of lads that they are, have secured a shock 0-0 draw at home to Denmark. It was a cracking performance from Georgia, and they dominated large periods of the clash in Tbilisi. The Danes had a chance to draw level with Ireland at the top of the group on 11 points, but this result is a major blow to their qualification hopes.

Elsewhere, there was little surprise in the game between Switzerland and Gibraltar, with the Swiss winning 4-0.

How does the result in Georgia affect Ireland's chances of qualifying? Well, it makes our lives a lot easier.

We laid out the qualification permutations after the draw with Switzerland on Thursday night, and much of the same logic remains.

Ireland have three games left to play: Georgia (away), Switzerland (away), Denmark (home).

Before tonight's result, it looked like Ireland would have to gather at least six points from those games to qualify. That may not be the case anymore.

Ireland still need to beat Georgia, that much is certain. That will be no easy task, especially when you consider their result tonight. Still, while Ireland have put in some questionable performances against the Georgians over the years, they have only failed to beat them on once in their 10 meetings.

A few hours after that game in Tbilisi, Denmark and Switzerland will face off in Copenhagen. The best result for Ireland here would be a Switzerland win, but a draw would also be satisfactory.

Those two drew earlier in the group, but it was a lucky result for Denmark. They scored three times in the final seven minutes to rescue an undeserved draw. You would think the Swiss will come away from Copenhagen with at least a point, especially as they are now under pressure themselves.

If Ireland beat Georgia, and Denmark draw with Switzerland, Ireland would be four points ahead of the Danes with two games to play. Switzerland would be one point further back, but with a game in hand. 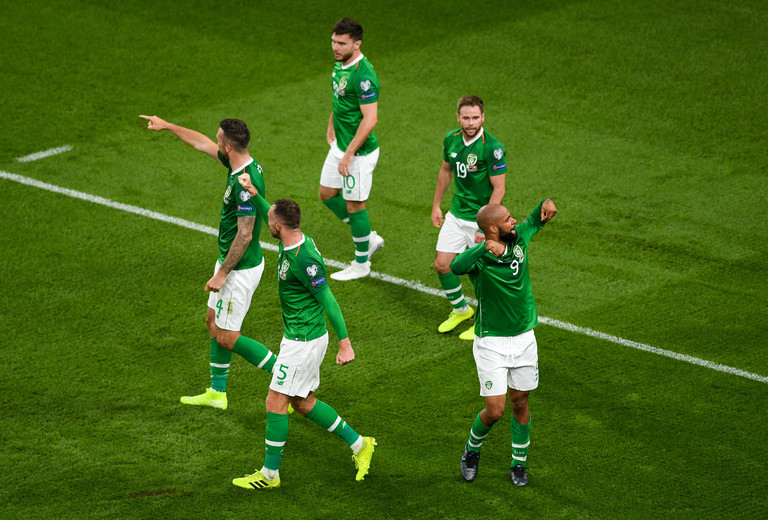 Next up for Ireland is a trip to Switzerland. Before tonight's fixtures, it looked like Ireland would have to get at least a point in this game. That may not be the case now.

As long as Denmark fail to beat Switzerland, a defeat would not be the end of the world here for Ireland.

Denmark will only play one game in October. Even accounting for a loss for Ireland, they are still in a good position.

Ireland will not play in this round of games, taking place on November 15th. Switzerland host Georgia, while Denmark host Gibraltar.

You can expect wins for both side.

If everything goes as expected it will all come down to this, with two games taking place on November 18th. Switzerland go to Gibraltar, so you can mark down three points for them.

Ireland host Denmark in what will be a huge clash. In our expected scenario, Ireland would sit one point ahead of the Danes.

If that were the case they would only need a draw to win. You would expect Mick McCarthy to get it, even if we know how dangerous the Danes can be. That should be enough to bring us to the Euros.

The scenario suggested above is certainly in play. Ireland need to beat Georgia, and failing to do so would be a disaster.

If Denmark fail to beat Switzerland (which seems likely), Ireland wouldn't need to get anything in Switzerland.

Even if Denmark do defeat the Swiss, it just requires Ireland to beat the Danes on the final day of the campaign (if they lose to Switzerland).

Football
6 days ago
By Gary Connaughton
'It Didn't Work, The Shape Of The Team Didn't Work' - Doherty & Coleman Repeat Unlikely
5

Football
4 weeks ago
By Gary Connaughton
McCarthy Stresses Form, But Will He Practice What He Preaches In Irish Midfield?
Previous Next