It's a bonkers evening on the hamster wheel of football news. Sergio Ramos is leaving Real Madrid. And Rafa Benitez, of all people, is being linked with a move back to Liverpool to manage Everton.

The news comes via Jim White and others, who say talks are on-going and a deal is close.

Being told Rafa Benitez tonight on the brink of becoming @Everton manager after more talks today.

Which means we've entered the kite-flying phase of negotiations. Everton seem to be gauging just how negative its fanbase would react to the hiring of a former Liverpool manager.

So far, it's been pretty negative.

Speaking on bein Sport, former Everton striker Andy Gray was unequivocal in his dismissal of the mooted appointment.

Andy Gray gives his thoughts on the possible appointment of Rafa Benitez as Everton Manager pic.twitter.com/zFsYzlUVfv

Gray said, "I've talked to some people I know in the Liverpool area, and they've said if that happens, they won't go back...If it'd been 10 or 11 years ago, and he'd left Liverpool, maybe... Has Rafa lit up the footballing world as a coach since? In my opinion, nowhere near it."

The sentiment was echoed by talksport's Mike Parry.

If Rafa Benitez is appointed @Everton manager I'm out of there. As a 60 years Evertonian season-ticket holder I will not accept a reject Liverpool manager at Goodison. It's a joke. The legends Bill Shankly and Harry Catterick will be sharing a glass of bemused whisky tonight ..

"I was really disappointed because one team wanted to win the game and one team didn't want to lose it.

"Everton put eight or nine men behind the ball and defended deep but that's what small clubs do.

"When a team comes to Anfield and only want a point what else can you call them but a small club?"

Benitez appeared on MNF in 2019 and clarified his 'small club' remark while saying he was open to taking the job at Goodison.

Rafa Benitez, back in December 2019, when asked about whether he’d take the Everton job if he was ever offered it.

We'd love to Rafa and Seamus Coleman working together but that's our Irish bias coming out. 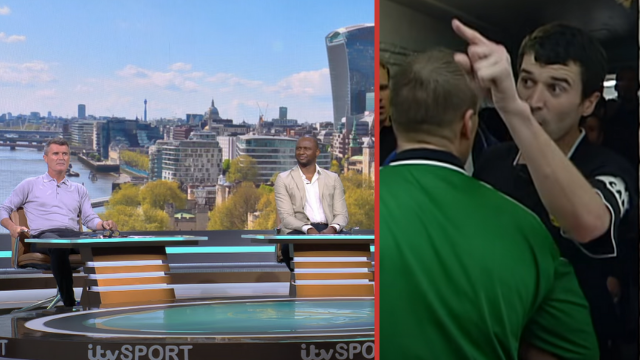 Premier League
3 weeks ago
By Jonathan Byrne
McCoist Thinks Liverpool Got Away With 'Stonewall' Gordon Penalty
Football
3 weeks ago
By Gary Connaughton
Liverpool Fans Couldn't Get Enough Of Alisson Taking The Piss Out Of Jordan Pickford
Football
3 weeks ago
By Gary Connaughton
Souness & Carragher Feel Anthony Gordon's Diving Cost Everton A Clear Penalty At Anfield
Popular on Balls
GAA
3 days ago
By PJ Browne
Mayo's Padraig O'Hora Using Football To Promote His Real Passion
Rugby
1 day ago
By Colman Stanley
'That Pace, That Intensity, That Organisation' All Black Legend Has High Praise For Leinster
GAA
1 day ago
By PJ Browne
Jim McGuinness's Gut Tells Him Dublin Will Win The All-Ireland
The Rewind
2 days ago
By Eoin Harrington
Watch: Brilliant Dermot Morgan Dublin Segment From 'The Travel Show' Resurfaces