Rangers midfielder Glen Kamara has detailed the racial abuse he suffered during Thursday’s Europa League tie against Slavia Prague in a newly-released statement.

Kamara, who played the full 90 minutes of the last 16 tie, claimed after the game that Slavia Prague player Ondrej Kudela had used racist language towards him. Kudela could be seen whispering in Kamara’s ear and the Rangers player alleged that Kudela had used derogatory language during the altercation.

Clearly hear what went on from Kamara and Zungu here. Disgusting behavior from the Slavia player. pic.twitter.com/AgP0NqRobr

Rangers manager Steven Gerrard came out in full support of his player after the game, but the claims were vehemently denied by Slavia, who in turn alleged that Kamara had physically attacked Kudela after the final whistle. Kamara has now released a statement, with the assistance of a solicitor, to detail the altercation with Kudela.

“There is no place for racism or any form of bigotry in football. Since summer many of us have taken the knee in solidarity with those who have lost their lives to racial violence. If UEFA genuinely wants to 'show racism the red card', then it’s time to stop the tokenism and take a zero-tolerance approach.

As a player I do not expect myself, nor any other to have to tolerate racial hatred on or off the pitch in 2021. The vile racist abuse by Ondrej Kudela, took place on the international stage, and any failure to act by UEFA will be viewed as a greenlight for racism.

"During yesterday’s match with Slavia Prague, Kudela was arguing with a Rangers player and after I tried to intervene, he told me to shut up and then said ‘one second my friend.’

Kamara went on to discredit Kudela’s defence, as well as thanking his team-mates and his manager for standing by his side in the aftermath of the incident.

“Kudela’s actions were deliberate and premeditated, but he was loud enough for my team-mate Bongani Zungu to hear what was said.

I am grateful for the unconditional support of my team, our club and especially our manager Steven Gerrard.”

Slavia Prague’s response, by contrast, has refused to acknowledge the alleged abuse by their player, instead turning the focus on the club’s fans, who were pictured holding a vile banner with Kamara’s name and a racial slur in the aftermath of Thursday’s game.

It shows them holding up a banner which contains a racist word about him.

Rangers were ultimately knocked out on Thursday after a 3-1 loss on aggregate – though Slavia were helped by two red cards for Rangers players on the night.

Kamara was sadly not the only Rangers player subjected to racial abuse in the aftermath of Thursday’s game, as Kemar Roofe – one of the two Rangers players sent off – was the victim of similar abuse on Instagram. Kamara’s statement closed with a word of thanks for the club’s supporters and those across the footballing community who had come out in support of himself and Roofe – as well as a call to action for social media platforms to clamp down on racial abuse.

“I want to thank not just our Rangers fans, but the many fans from across the football community and beyond, for calling out racism not just against myself, but also fellow player Kemar Roofe, who was subjected to a tirade of racist bile on Instagram.

We as black players are sick of the freedom that such bigots are given to parade their hatred on social media and wonder when the likes of Instagram will start to take action.”

The prevalence of racial abuse in football sadly seems to be on the rise, with recent incidents involving Ian Wright, Anthony Martial and Axel Tuanzebe all making the headlines. We can only hope that UEFA and the footballing authorities come down harshly on Slavia Prague to send a message of solidarity and to clamp down on these vile incidents.

SEE ALSO: Celtic Won't Be Giving Rangers A Guard Of Honour This Weekend 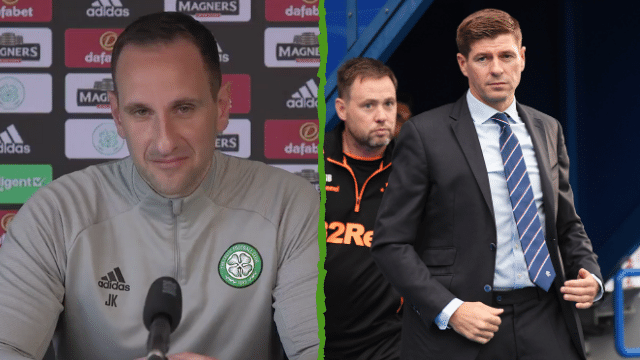 Football
7 months ago
By Eoin Harrington
Slavia Prague Ban Highlights Glaring Issues With UEFA’s Anti-Racism Policy
Football
8 months ago
By Donny Mahoney
With One Flying Elbow, Gareth Bale Has Become A Hero To Anti-Racists
Previous Next