Andrew Dickson, self-described Rangers 'media guy' felt the need to say something about the usual stupid sectarian songs being sung during the first half of Rangers match against Berwick today - singing that ESPN commentators felt the need to apologise for. 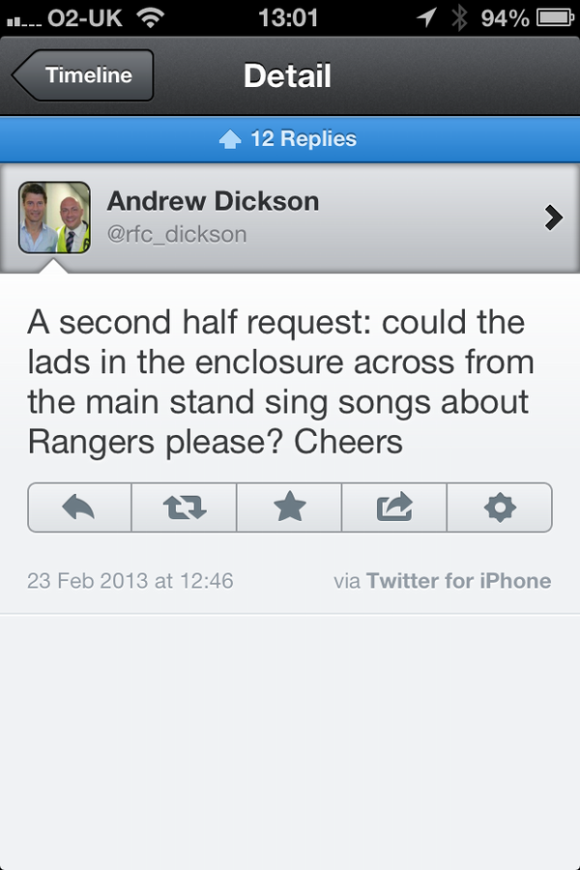 He didn't say his club's supporters were solely responsible, but he deserves praise for risking the ire of Rangers fans.

If those who think what was sung in the first half is acceptable, they should look at 99% of the users on Twitter who disagree with them

If we could all (Rangers fans, Celtic fans, everyone else) drag ourselves into the 21st century and move forward that would be terrific

Rangers have since issued a statement on Twitter stating their 'disappointment' with 'inappropriate songs' sung at Berwick.

Football
5 hours ago
By Jonathan Browne
What Became Of The Great Monaco Team That Reached The 2004 Champions League Final
Football
5 hours ago
By Eoin Harrington
Given And Lennon Both Keen On Potential Everton Return For Wayne Rooney
Football
11 hours ago
By Gary Connaughton
Carragher Reveals Unhappy Instagram Message From Lionel Messi After MNF Comments
Popular on Balls
Football
1 day ago
By John Dodge
These Are The Irish Footballers Who've Received Ballon D'Or Votes
Rugby
10 hours ago
By Gary Connaughton
People Couldn't Get Over The Officiating In Castres' Loss To Harlequins
Football
1 day ago
By Eoin Harrington
Report: Manchester United's Younger Players Are Growing Tired Of Cristiano Ronaldo
Football
1 day ago
By Jonathan Byrne
Watch: Caoimhín Kelleher Pulls Off Wonder Save In Liverpool Cup Win