Redknapp And Carragher Were Staggered By VAR Madness On Sunday

The VAR officials at Stockley Park must have had a day off on Sunday, as three major calls across the afternoon's Premier League games were missed by VAR reviews. The biggest flashpoints came during Liverpool's visit to Spurs - and Jamies Carragher and Redknapp could not understand the logic behind the officials' decisions.

Spurs captain Harry Kane was lucky not to be sent off for a late challenge on Andy Robertson, before Liverpool were denied a stone wall penalty moments later.

VAR has not been without its critics since being brought into the Premier League in 2019, but Sunday marked a serious low point for the video referees.

In Sunday's showpiece clash between Tottenham and Liverpool, four major calls came down to VAR reviews - and one could argue that only one of the reviews garnered the correct result.

The first-half saw Harry Kane put Spurs 1-0 up, before flying in with a wild slide tackle on Andy Robertson just seven minutes later. The replays showed that Kane caught Robertson's ankle with his studs up, and the consensus among fans and pundits alike was that the England captain should have seen red.

Should Harry Kane have been sent off?
Should Liverpool have had a penalty?

Jamie Redknapp said as much at half-time on Sky Sports:

Red card. I think he's reckless, out of control, I think he'd just scored, the crowd were up, fever pitch.

I've seen a lot of players sent off for less than that. Sometimes, reputation, being England captain, these things help you, because that is a really late challenge.

He's lucky that Andy Robertson's foot is not on the floor. He just gets it out of the way in time.

The second flashpoint came towards the end of the first-half. With Diogo Jota through on goal, Spurs defender Emerson Royal crashed into the back of him with all of the grace of a bin lorry on fire. Amazingly, even after a VAR review, no penalty was given to Liverpool.

Jamie Carragher could not understand the logic behind the decision, suggesting that the bar for what warrants a penalty being awarded has been set too low.

There were eight penalties last week, maybe the referee thought 'this week we're not giving them' or 'it's got to be something really big'. Newcastle should have had one earlier this afternoon.

It's a blatant penalty. We went too far the other way last season. Last season, just a touch was a penalty. We've come away from that, which I think we'd all agree with.

A penalty is a penalty.

Jurgen Klopp was not happy with the two calls in the first-half, ultimately being booked by referee Paul Tierney for his remonstrations on the touchline.

The controversy didn't end there, with Liverpool's second goal in the second half being allowed to stand despite the ball touching Mo Salah's hand in the buildup. Andy Robertson tucked the ball into the net, but Spurs felt aggrieved that VAR didn't recommend a review of the incident.

Moments later, Spurs were level and it was after Son Heung-Min's equaliser that the fourth flashpoint came. Just moments after the game was tied up at 2-2, Robertson was sent off for a wild kick on Emerson Royal. It was a crazy moment, but Liverpool could have no arguments with the decision.

Many of their fans, however, felt particularly aggrieved by the decision, given that Spurs' talisman Kane had escaped red in the first-half for a wild tackle of his own.

The drama in North London came after Newcastle were denied a stonewall penalty against Manchester City. Redknapp was similarly unimpressed by that call, saying that Ederson had "wiped out" Ryan Fraser.

"That's just a terrible excuse... he wipes him out."

The implementation of VAR in the Premier League will once again be subject to huge questions after Sunday's chaos, with the level of officiating on show simply not good enough. 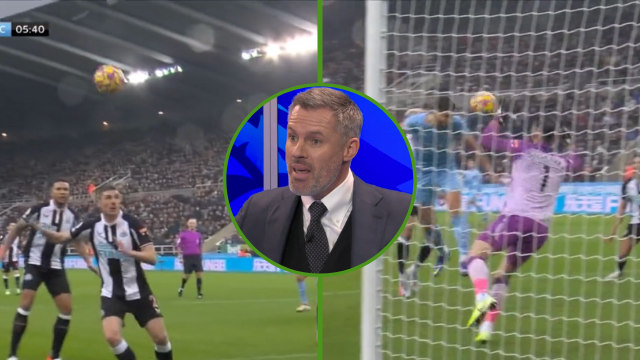