The Referee Was The True Star Of The Champions League Final

N'Golo Kanté and Antonio Rudiger were both widely praised for their performances in Saturday's Champions League final for Chelsea, but there was one unsung hero who we think deserves more recognition - referee Antonio Mateu Lahoz.

Spaniard Lahoz came into the final with some question marks surrounding his previous relationship with Man City manager Pep Guardiola. He had awarded three penalties against Guardiola's City previously, as well as sending Pep to the stands during their quarter-final defeat to Liverpool in 2018.

When asked about Lahoz, Guardiola dismissed any suggestion he was unhappy with his appointment, simply saying that he "couldn't care less".

Pep Guardiola was asked about his history with the #UCLFinal referee Antonio Mateu Lahoz pic.twitter.com/opSO79l2m9

So there was intrigue surrounding the Spaniard from the minute he was announced as the man in the middle for Saturday's final. He has gained something of a reputation for his colourful style on the field, but this was comfortably the biggest game of his career to date.

In fairness to him, he ran a very steady game, with very little contention surrounding any of his decisions during the 90 minutes.

Thankfully, the most memorable moments of the evening for him were when he showed some (admittedly unnecessary) style and panache when showing the yellow card to players on the field. His no-look booking of Gabriel Jesus was a particular highlight.

Here it is. Just to give the man the credit he deserves. pic.twitter.com/7RBkG6nu7Q

But comfortably the most memorable booking of the evening came the way of Chelsea centre-back Antonio Rudiger. With the German down and receiving treatment after a collision with Kevin de Bruyne, Lahoz waited patiently before offering Rudiger a hand up and - while still helping the Chelsea man to his feet - brandishing the yellow card.

There can only be one winner of the Champions League. And it is Antonio Miguel Mateu Lahoz.#CelebrityRefs https://t.co/JUV28IQ8u0

It was a brilliant moment of comedy in the biggest game of the football calendar, but Lahoz also stood firm when faced with tough decisions, correctly ruling that Man City shouldn't have had a penalty for an alleged Reece James handball. He stood firm in the face of loud shouts from the City players, showing he had the necessary cool head to go with the sense of fun on the pitch.

Zero controversy in last nights final because he bossed it.

Take a bow ref. (And come to the PL!) pic.twitter.com/coZ0OjitvX

It was very unusual to see such a light presence on such a big occasion in the footballing calendar, but Lahoz's proficient refereeing also did not go unnoticed by watching fans. He and his officiating team ran a tight ship, with little to no controversy or delays surrounding the biggest decisions,

I really wish the English refs were watching today. Lahoz & co showed how to handle a big game and got every decision right.

No VAR, no wrong offside calls, not a single step wrong.

THAT'S HOW YOU HANDLE A GAME!

After a season of moaning about VAR and all of its shortcomings, it was a welcome change to have a proficient and effective referee taking charge of the biggest game of the season - and he even brought a bit of swagger to the role.

The Champions League final was all the better for the presence of referee Antonio Mateu Lahoz. 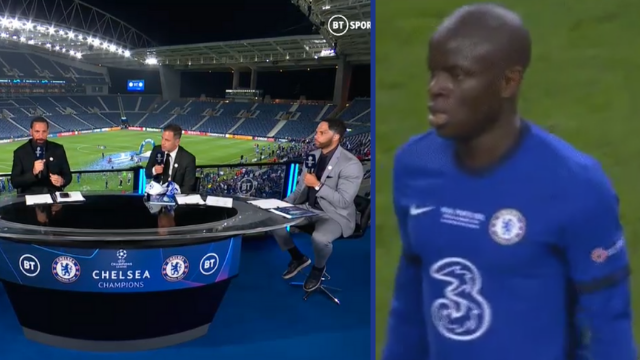