Hello and welcome to Balls.ie's Retro Gaming Review, where we take a look back at some of the more iconic sports games of our youth in an attempt to judge how well they have aged.

We will be playing a number of games on old consoles and critiquing the experience with the luxury of having become accustomed to modern gaming, so instead of the wide-eyed "THIS IS AMAZING!" naivety with which we first played these games, we can look back at them with a smug and condescending attitude and point out their many, many flaws. Also present is the possibility of unearthing precious childhood memories and blasts of nostalgia that fill our cold adult hearts with joy, but we can't promise anything.

First up is World Cup Italia 90 on the Sega Megadrive. 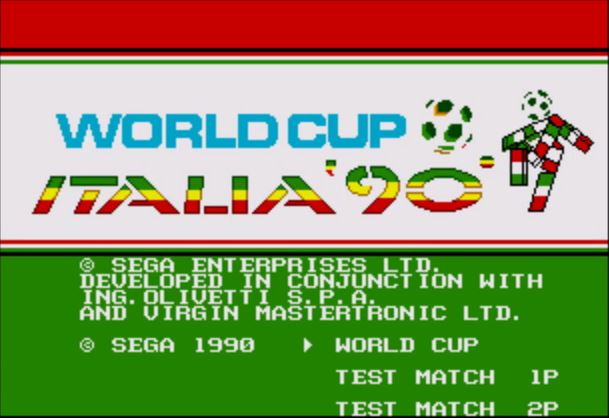 Initially released in 1990 to coincide with the FIFA World Cup, 'World Cup Italia 90' will be a game that pretty much everybody who played a Sega Mage Drive had played, as it soon became bundled with the console as part of a 6 in 1 game cartridge that featured such classics as Sonic The Hedgehog, Moto GP, Golden Axe, and Streets Of Rage II.

We don't know why the official game of the FIFA World Cup was released without all the competing teams available in game, but we didn't really mind... Until we remembered you can't fecking play as Ireland! What's that about? Kids all over Ireland were disappointed but got on with it and normally picked Brazil. Ireland is clearly visible but when you hovver over it you get nothing. Gutted. 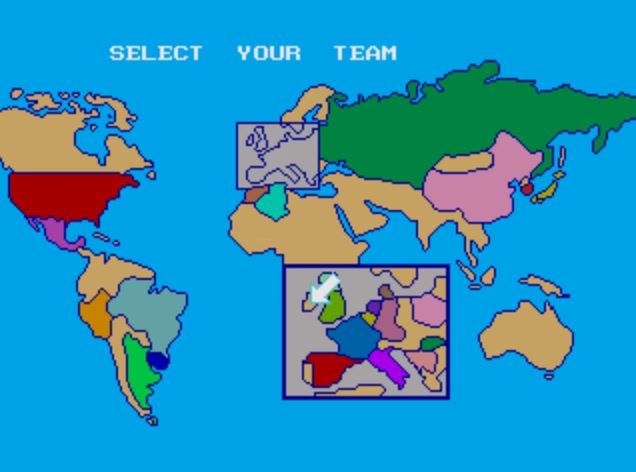 The main menu as seen above offers two game modes, 'World Cup', or 'Test Match', pretty self explanatory. You have to remember that this was a time when the idea of being able to compete in a full, organised World Cup tournament was a huge deal, so credit to them for that, although a World Cup game without a World Cup would have been pretty uninspiring.

So we began our playtest by picking Holland and seeing if we can pick up where we left off in 1996 when my older brother got a Playstation for Christmas and the Sega Mega Drive died a slow and lonely death. 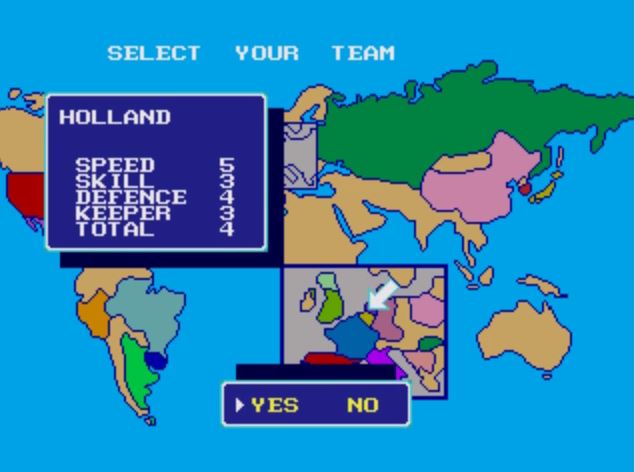 The Dutch were chosen because of the orange kits and 5 rating for speed (FIFA 15 instinct kicked in here), we set out for battle and our first match was against Scotland, who of course we in the game, because you HAVE to have Scotland apparently.

Here is the team selection screen, where you are given a number of fantastically named options with stats that I'm sure mean something, but there is no way to be sure. Picking a midfield for Holland was fairly straight forward, as 'Craig' and 'Van Der Most' were certainties. Donner got into the side based on a 4 rating for 'A' which I thought was attacking, and Brennan was picked because he clearly only declared for Holland when he found out Ireland wouldn't be in the game. 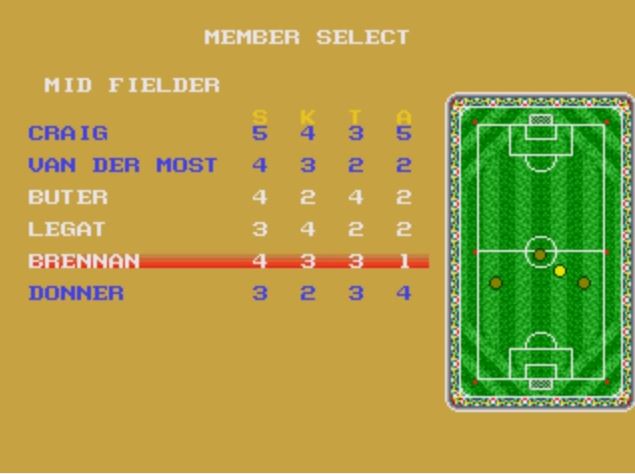 The first thing you notice are the graphics. World Cup Italia 90 actually looks decent for a game that was made in 1990. The pitch looks like a football pitch, the top-down view is a little strange but probably was the best option, and the players do sort of resemble football players, so no complaints there.

The next thing you notice is the sound in the game, which for the most part is hilarious. The typically '90s 8bit techno beat in the background is there in place of the white-noise that passed for a populated crowd at the time, and honestly it does improve the experience as it's largely inoffensive and takes some of the focus away from the laughably bad noises that come from the players, who plod around the pitch making sounds like something from a Wallace & Gromit movie. Again, we can't complain about the sound as it was fairly standard for games of the era.

Now, to the gameplay.

The gameplay is where World Cup Italia 90 really got to show it's charm. It was bare bones at it's finest, 'A' is shoot regardless of where you are on the pitch and 'B' is pass which is literally just a hoofed long ball in the general direction of your players, which further begs the question, why weren't Italia 90 Ireland included in a game that was seemingly made for them?

The tackling is everything a 10 year old boy wants in a video game: No holds barred. In fact, there is no referee on the pitch and there are no fouls, which means you are left to mercilessly hack everyone and everything between you and the ball. And this is exactly what we did:

Shooting is also incredibly simple, in that you shoot in a straight line from where you are facing, but should you manage to beat the keeper you are greeted with the absolute best thing about World Cup Italia 90, the bog standard celebration cut-scene, which is literally a still frame of the same player running with one arm raised and wearing your team colours. It's so bad that it's brilliant.

A beautiful finish from Craig.

The matches seem to drag on, as there is nothing other than tackle, pass, and shoot. Dribbling is not advised due to the total lack of rules, so you're best bet for scoring is hoofing it around in a pattern and working a shot at an angle. The goalkeepers are user controlled, which does go some way to spicing up the action, along with the seemingly totally random bicycle kicks:

The World Cup works as it should. You are randomly placed in a group with three other nations, and then progress to the knockout stages. We never got to see the final World Cup winning screen, as there was no option to save progress so you had to complete your World Cup campaign in one sitting. We also couldn't manage to take the trophy back to Amsterdam this time, as after getting through the groups we were eliminated by U.S.S.R. so we'll have to imagine how fantastic the World Cup winners screen was.

In conclusion, World Cup Italia 90 brings back fantastic memories, looks well, and is perfectly playable for about 10 minutes before you begin to wonder 'what next?'. Unfortunately, nothing is next, the game is as shallow as can possibly be and just isn't an option if you're looking for more than a quick dosage of nostalgia.

BUT, chances are, you are not looking for more than a quick dosage of nostalgia, and that is just what you want. In that case, World Cup Italia 90 is really good fun as a local multiplayer and is guaranteed to leave you with a smile on your face if you played it when it was relevant. If not, maybe give it a miss, you can't even play as Ireland so if you don't have the nostalgia there is really nothing to see here.

Gaming
1 week ago
By Jonathan Browne
FIFA 22: Serie A And EA Sports Announce Official Partnership
Gaming
5 months ago
By Fiachra Gallagher
FAI Announce Launch of Competitive FIFA 21 Competition
Football
6 months ago
By Balls Team
14 Reasons Why FIFA 98: Road To The World Cup Was The Best Game Ever
Previous Next

Gaming
1 week ago
By Jonathan Browne
FIFA 22: Serie A And EA Sports Announce Official Partnership
Gaming
5 months ago
By Fiachra Gallagher
FAI Announce Launch of Competitive FIFA 21 Competition
Football
6 months ago
By Balls Team
14 Reasons Why FIFA 98: Road To The World Cup Was The Best Game Ever
Popular on Balls
Football
17 hours ago
By Eoin Harrington
Watch: Caoimhín Kelleher Penalty Save Helps Liverpool Through To EFL Cup Fourth Round
Football
20 hours ago
By Jonathan Byrne
The Battle Of Old Trafford: Roy Keane On Why Arsenal 'Crossed That Line'
Football
21 hours ago
By Andrew Dempsey
Shay Given Reveals 'Horrendous' Contract Offer That Forced His Celtic Departure