Which brings us on to Ireland. Whether you're an a grizzled anti-John Bull Republican or a woke digital native who sees national identify as a fabrication invented by elites to keep the proletariat in check, surely we can all agree that a calamitous English team at a major tournament is very, very funny.

It's not anti-English to point out that England is horribly snake-bitten at the Euros. Each tournament has presented a different kind of calamity. In fact there's a comically epic aspect to each England Euros exit since 1988. This is what happens when extreme hubris meets cold reality.

We have revisited each England Euros exit since 1988, and we'd recommend you to do similar.

After months and months of moaning about the injustice they suffered at the hands of El Diego and Argentina, England had the opportunity to right the wrongs of history at Euro 88. Bobby Robson brought a stellar squad to Germany that featured peak Lineker, Bryan Robson as well as buoyant talents like Waddle, Beardsley and Barnes. How did England do in the end? They lost all three group games, including a famous loss to Ireland, of all countries.

Sandwiched between two strong World Cup performances, Euro 88 goes down as one of England's worst tournaments.

A vintage England unravelling occurred in the final group game against hosts Sweden. England needed to beat the Swedes to reach the quarterfinals. The match was level in the 62th minute when Graham Taylor decided to replace Gary Lineker with Alan Smith. Lineker was a goal shy of Bobby Charlton's record of England's leading goal scorer and set to retire from international football after the tournament. This was a high-stakes substitution. Sadly, England did not get a goal, but Tomas Brolin did. England were booted out of the tournament, Lineker's England career finished with him a goal shy of Charlton and Graham Taylor became a tabloid punchline. The result spawned one of the S*n's most famous headlines, and years and years of turnip-related jibes. 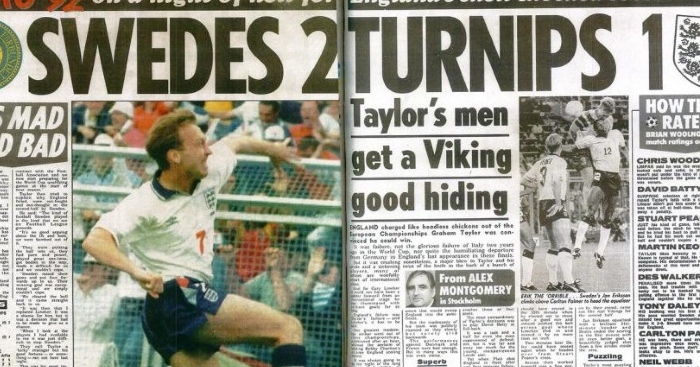 For most countries, there is no shame in going out in penalties in a major tournament at the semifinal stage. This being England, though, there is shame. Euro 96 was all about England reclaiming its place on the football pecking order. Football came home. Gazza bleached his hair and scored that golazo against Scotland at Wembley. After England beat the Netherlands 4-1 in the group stage, it was wonderfully poised for the Three Lions.

Unfortunately, there was the small task of Germany in the semifinals.

And England had their chances to win that match with a golden goal. Imagine if Gazza's boot was an inch longer.

Or if Darren Anderton had finished this chance.

In the end it was Gareth Southgate's fate to miss a penalty and do a Pizza Hut advertisement with Stuart Pearce and Chris Waddle, wearing a paper bag on his head. Football can be cruel.

Five minutes was all that stood between England and the knockout stages. The opponent was Romania.  The first sign of disaster came when David Seaman was injured during warmups and Nigel Marytn was drafted in to the starting team. Despite a nervy start, England still went into the break up 2-1. A draw would have seen them through. Only England could conjur the disaster that followed. Monteanu equalised after the restart and Phil Neville gave away a boneheaded penalty in the 85th minute.

Interviewed after the game, Kevin Keegan told Garth Crooks that 'if it was about endeavour and honesty, we would have won this tournament'.

For people of a certain vintage, England's exit from Euro 2004 will always be fondly remembered as it coincided with a few weeks of wonderful June weather in Ireland and one of the greatest hurling matches ever played. Euro 2004 remains England's most enjoyable Euros exit because it was a multi-act tragicomedy. While England's eventual loss to Portugal in the quarterfinals was life-affirming, it wasn't even their funniest defeat of the tournament. England's loss to France in their first group stage game fully captured the English hubris of the noughties. England were up  one-nil and on course for a famous win when Silvestre took out Wayne Rooney inside the penalty area in the second half. But, you know the rest of the story. Barthez saved Beckham's penalty, and France somehow managed to score twice in injury time to win the game. Steven Gerrard's backpass blunder remains one of the maddest things we've ever seen on a football pitch.

And still, England fans still daydream about Euro 2004 and what might have been. It was the summer Sven unleashed a rampaging, 18-year-old Wayne Rooney on European football. Had England held on to beat France, they would have won the group and played eventual champions Greece in the quarterfinals. Instead they played hosts Portugal.

The tournament's decisive moment came in the 27th minute, when an injured Rooney was substituted for Darius Vassell. Rooney had already scored four goals in the tournament and England were far less potent without him. The quarterfinal finished 2-2 and ended up in penalties, as most epic England defeats do. In the end, Vassell missed his penalty, and Portugal's gloveless keeper Ricardo made his. The rest is history.

England didn't technically qualify for this tournament so in theory, Euro 2008 should be omitted from consideration. However, it would be wrong of us to entirely ignore the defeat to Croatia in the November rain  which ended Steve McClaren's reign and cost England qualification.

Manager Steve McClaren was sacked a day later and called 'a wally with a brolly' by the English media ☂️ pic.twitter.com/hGUacxeVoM

All of the madness took place before the tournament even began. It started when Fabio Capello quit a few months before the tournament over the FA's decision to strip John Terry of the England captaincy. Terry was set to face trial for racially abusing Anton Ferdinand just after the Euros. New manager Roy Hodgson then opted to leave Rio Ferdinand out of the squad, but keep John Terry in it. Once the games started, there was something almost routine about this England Euros exit: out in penalties in the quarterfinals. Many forget that England actually won their group. Unfortunately they drew eventual runners-up Italy in the quarterfinals. That match will forever be remembered for Pirlo's panenka on Joe Hart during the penalties. It remains a truly cathartic football moment.

Eight years since Andrea Pirlo mugged off Joe Hart and it never gets oldpic.twitter.com/J1i55mtqj3

The BBC called it England's 'worst humiliation since they were knocked out of the 1950 World Cup by USA'. Little of the match is remembered; what endures is the whimper from Steve McClaren's mouth when Sigthorssen put Iceland up 2-1 in the 18th minute.

England had  gone 1-0 up when Wayne Rooney converted his 4th minute penalty. But the wheels came off soon after, and England conceded twice in fifteen minuets. The Viking claps resounded around the world and England were sent packing. That it came just days after the Brexit referendum made the result even funnier.

Roy Hodgson resigned right after the game. After decades of underachieving. this was rock bottom.

Or so it seemed.

Having read all of that, you tell us, which was England's most calamitous Euros campaign?

SEE ALSO: Duff & Sadlier Think England Could Be In For Tricky Time At Euro 2020 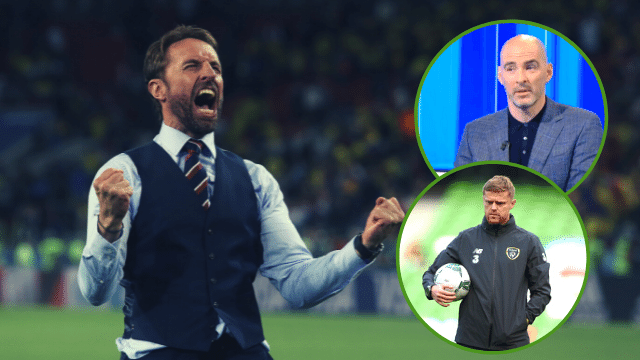