There was a sense that Liverpool could sweep Manchester United aside this afternoon, but few could have predicted just how bad Ole Gunnar Solkjaer's side would be in the first half of their game at Old Trafford.

A mix of shambolic defending and lack of organisation allowed a Liverpool team playing in third gear to canter to a 4-0 lead before we even reached the interval.

Mo Salah scores for a tenth appearance in a row! 🔥#MUFC 0-3 #LFC

Things could have went even further south for United before the interval, with Cristiano Ronaldo very lucky to avoid a red card after kicking out at Curtis Jones.

Liverpool extended their lead even further before the break, with Mohamed Salah grabbing his second after more shambolic defending from the home side.

In all, things couldn't have gone much worse.

If Manchester United were a club with any sort of leadership, a change of manager would surely be on the way. Even Richard Keys can see how daft they are being in this situation.

Speaking on beIN Sports, he said that Ole Gunnar Solskjaer has to go after that first half showing.

Keys: Unless Manchester United score five in the second half, Ole Gunnar Solskjaer cannot survive this.

There's nowhere to go, You're 4-0 down at halftime to Liverpool, at home. That reception there, the halftime reaction, if that hasn't said to Ed Woodward and Richard Arnold 'time to go', then I don't know how plain it has got to be.

De Jong: I think so. If it was only 1-0 down you have a chance to come back into the game, but to lose to your biggest rival in the history of the Premier League?

It's 4-0 after 45 minutes, and you still have another 45 minutes to go. It's an absolute shambles.

Keys: They have been treating it like a training match.

Gray: United have been shocking! I'm taking nothing away from Liverpool who have been clinical.

He won't be the only one calling for Solkjaer's exit. 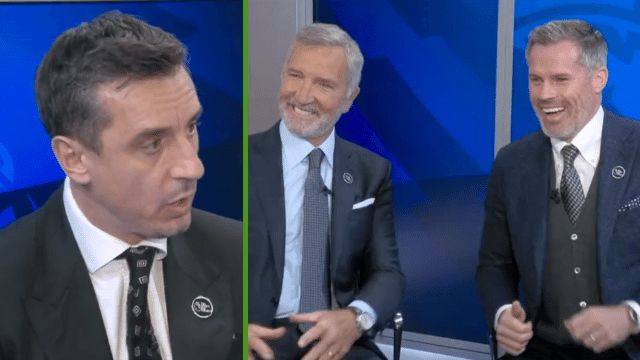 Football
16 hours ago
By Gary Connaughton
Jurgen Klopp Sums Up Just How Far Caoimhín Kelleher Has Come At Liverpool
Football
1 day ago
By Jonathan Byrne
Watch: Caoimhín Kelleher Pulls Off Wonder Save In Liverpool Cup Win
Football
1 week ago
By Gary Connaughton
Jamie Carragher Not Convinced By Jurgen Klopp's Approach In Arsenal Draw
Popular on Balls
The Rewind
1 day ago
By Jonathan Byrne
Watch: Cameraman Behind 'Man Slips On Ice' Video Talks About Viral Clip
29