Even Richard Keys Has Had Enough Of Unruly England Fans

On what should have been a massive night for English football, the conversation around their Euro 2020 final against Italy has now boiled down to the abhorrent behaviour of some of their supporters.

Not only did some ugly scenes emerge at London's Leicester Square, but a sizeable group would then go on to storm the barricades at Wembley Stadium.

You'd imagine it would be unlikely that this is the last we see of such scenes tonight, regardless of the result in the final.

Bein Sports reporter Matt Critchley gave an update on the situation in London, which understandably concerned him.

"On England's big day many fans have let them down"

Concerning scenes in Trafalgar Square as fans have broken into the national gallery in central London. @MattCritchley1 has the latest.#beINEURO2020 #EURO2020 #ITAENG

Even Ricard Keys, the man who will fill you with more lazy rhetoric about brave England than anyone else, had seemingly had enough.

He even went as far as to say he wished the final had not been held at Wembley Stadium.

Grimly predictable scenes in England. @richardajkeys wishes that the final was NOT played at Wembley today. #beINEURO2020 #EURO2020 #ITAENG

I will probably make myself very unpopular back in England, but really?

Was this not predictable, did we not expect to see this? I did.

Right now I'm wishing that this final had been played in Bulgaria, I really am.

Anywhere could have dealt with this.

It was bold of Keys to presume he wasn't already unpopular anywhere on the planet.

Groups of English supporters have forged an unwanted reputation in recent years, especially when going on trips abroad to follow the team.

There have been a number of examples of large groups occupying squares in various European capitals, often leading to clashes with local police. This tournament had largely seen such situations avoided, until tonight.

As Keys points out, it is a hugely regrettable (if somewhat predictable) way to round what has been a remarkable festival of football over the last month.

If you needed another reason to support Italy, now you have it. 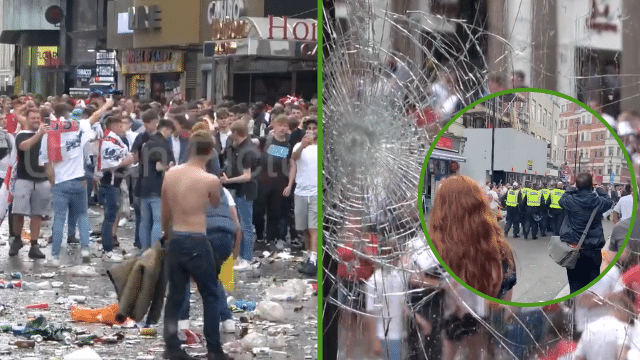