Robbie Brady On Missing The Wales Game, Moving To Burnley, And Going Against The Wishes Of Alex Ferguson

He described it at the moment as the "best feeling in the world". But how does Robbie Brady remember that goal now?

It's a weird one. It is a bit of a happy blur. But when I was just about to head the ball, it was almost like I wasn't going to get there. But when I did get there, it was just....it just fried everything in my head. It was a moment that I'll never forget. But afterward, knowing that it was done and we were off to play France...it was amazing.

Afterward, it was just pure joy everywhere. I remember after the game Roy Keane telling me to 'take these memories with you, because they don't come around very often'. 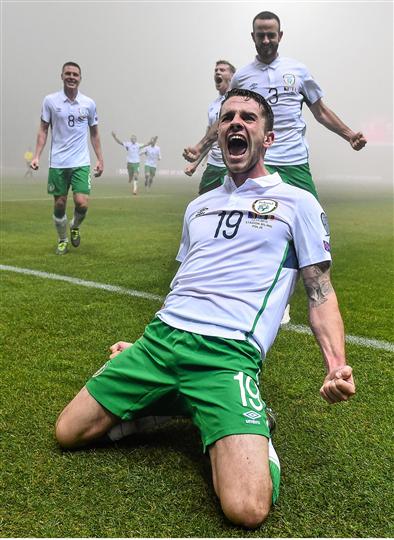 Brady spoke exclusively with Balls.ie to promote the launch of The Big SUBstitution, in which he and Jeff Hendrick are teaming up with Subway and Pepsi Max to surprise customers at a secret Subway location in Ireland, and offering an exclusive training session to one Irish football club.

Frustratingly for Brady, he is among Ireland's growing list of absentees for the critical World Cup qualifier with Wales on Friday: suspended owing to an accumulation of yellow cards in the opening games of qualifying. While he is undeniably disappointed to miss out, it won't mean that he will be sitting idly in the Irish camp ahead of the game:

It's really frustrating [not to be involved]. It's all people have been talking about over the last couple of weeks, and I'm gutted not to be involved. But the lads have a job to do, and I'll be with them in camp throughout the week in the build-up to the game.

I'm not sure I'll be taking a step back, I'm sure I'll be training as I normally am, and if I can help throughout the week in getting the lads ready for the game, then that would be fantastic. Obviously, the friendly after I'm eligible for, and I'm looking forward to getting a green jersey back on in that game, but I'm gutted that it won't be in the big one.

It's disappointment unfamiliar to Brady over the last few months. After months of speculation, Brady finally sealed a Premier League move in January, joining Irish teammates Stephen Ward and Jeff Hendrick at Burnley. Brady played with the latter at underage level with St Kevin's Boys, and now shares two sets of training grounds with Hendrick. Is he sick of him yet?

[Laughs] Not at all! It's been a mad journey for the two of us, and we've met back here, which is brilliant. It's good for me to have him and Wardy here to help me bed in. Yeah, that's it, it was the dream [making it this far]. But as we were getting older, at 15, 16, when we were playing underage internationals, I don't think it was a dream anymore. We thought we would get there, and luckily enough the both of us did get there.

Brady agrees that the presence of Ward and Hendrick swayed him toward Burnley, but it was by no means the only factor, with Sean Dyche's intent and eagerness to sign him encouraging Brady greatly, choosing Turf Moor over Leicester and Crystal Palace, whose interest in signing Brady was realistic.

Life at Burnley started spectacularly: an exquisite, curled free-kick in his first start for the club caused Chelsea to drop points for only the sixth time this season, and means that Brady has caused Antonio Conte as much strife as anybody over the last nine months:

I'm not sure if he knows who I am! Obviously, it just happened I've scored two important goals against his teams, but I don't think I'd be one of his main problems!

Brady is now where he expected to be: playing regularly in the Premier League, along with being one of Ireland's most important players (at the recent FAI awards, Brady scooped the gongs for player, young player, and goal of the year). It has taken sacrifice and bravery to get here, however, with Brady going against Alex Ferguson's wishes and leaving Manchester United in 2013 in pursuit of regular football with Hull City, with whom he had been with on loan. Brady believes that his current form has justified that decision:

Yeah, I think so. I felt it was the right time to leave Man United, and I have no regrets over it. I've got to where I want to be, I'm playing regularly in the Premier League and it's worked out great for me.

I think he [Alex Ferguson] wanted me to stay. I'd had a couple of loans out and done well, so he wanted me to stay on a bit longer. In my head, I had been playing league football and branching out on my own, and I was enjoying my football too much to give it up. There wasn't much football on offer at Man United, and I just wanted to play, so off I went.

There's been little stopping him since.

Robbie Brady was speaking to promote the launch of #TheBigSUBstitution with Subway and Pepsi Max.