Five years ago, Robbie Brady brought us all to our feet in Lille.

Those were the words of RTÉ commentator George Hamilton on the fateful night at Euro 2016 when Brady scored in the dying minutes of Ireland's crucial group stage clash with Italy. With just six minutes to go, the then Norwich City man nodded the ball past the Italian keeper to seal Ireland's place in the last 16 of the tournament.

It is just absolute magic. The ball, the run, the header and the crowd 😍

The quote was one of Hamilton's best lines of commentary in his long career with RTÉ (it has lots of competition), but it hasn't entered the Irish footballing lexicon in the same way that 1990's "A Nation Holds Its Breath" has. Perhaps that's understandable - reaching the quarter-finals of the World Cup on your first appearance is undeniably a bigger achievement than reaching the first knockout round of a European Championship.

But what is it about Brady's goal in Lille that makes it feel so unique in Irish footballing history? The context of the goal is important.

Italy had won their first two group games against Belgium and Sweden, so they had not only qualified for the last 16 but had sealed top spot in the group. That meant they went into the game against Ireland with an opportunity to rest their key players - an opportunity they snatched at when it became clear they would be playing Spain in the last 16. 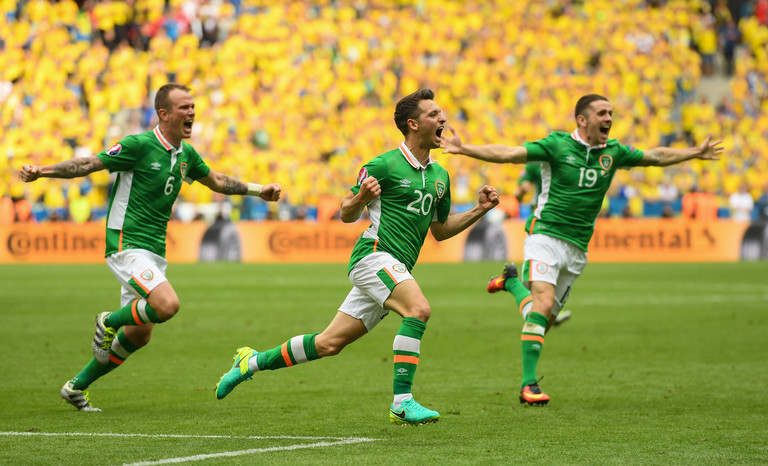 The Irish team celebrate after Wes Hoolahan put them 1-0 up in their Euro 2016 opener against Sweden. Photo: Stephen McCarthy/Sportsfile.

As well as that, the contentious new 24-team format for the Euros was introduced for 2016, meaning the four best third-placed teams would qualify for the last 16. There was no shame in qualifying as the second best third-placed team but, to some, it may have cooled any excitement at the achievement slightly.

Ray Houghton's goal against England at Euro '88 was simple as. First ever game at a major tournament, against the oldest enemy, five minutes in, 1-0 up. Hold on for the rest of the game.

Houghton's goal at USA '94 against Italy had a similar air of simplicity to it. When you get an Irish game at a major tournament in a country so indelibly linked with ours as the United States is, the atmosphere was bound to be electric.

OTD 📅 | That goal and that celebration 😍

Houghton's goal in front of a Giants Stadium in New York packed to the rafters with Irish fans - against the team that would ultimately finish as runners up - was instantly memorable for that very reason.

Ireland's draw against England at Italia '90 was admirable because of how deep the English side progressed into the tournament. Similarly, snatching a draw against eventual runners up Germany at the 2002 World Cup was remembered fondly because of how strong the German team were.

The list goes on. For a country as small as Ireland, with four major competitors for the title of "national sport", we really did punch above our weight at major football tournaments from the late 80s through to the early noughties.

The USSR in 1988. England in 1990. Italy in 1994. Germany in 2002. These were all teams who progressed to the final stages of the tournament, and Ireland managed to get results against them all while they fielded full-strength teams. 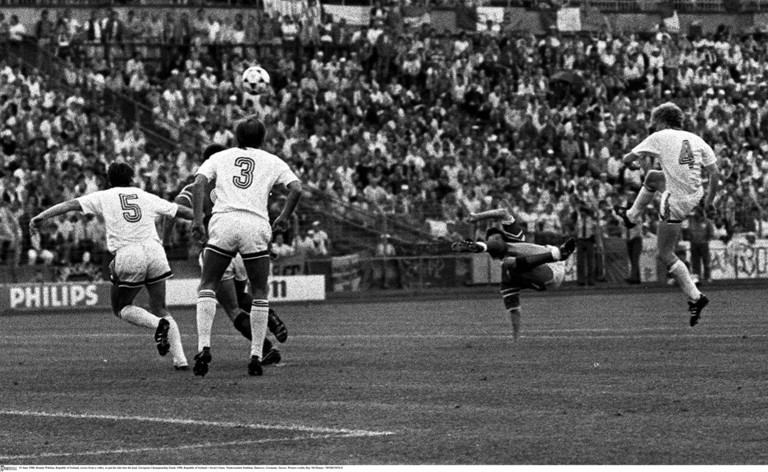 That's what 2016 lacks. On paper, there's not the same simplicity to it all, nor is there quite the same element of "David versus Goliath". This was an Italian team that rested players, and Ireland - for the first time ever - qualified for the knockout stages without finishing in the top two of their group.

But when you look deeper, this was a night that gave Irish fans every right to be as proud as ever in their national team, and it deserves its place in the pantheon of the nation's great footballing moments. 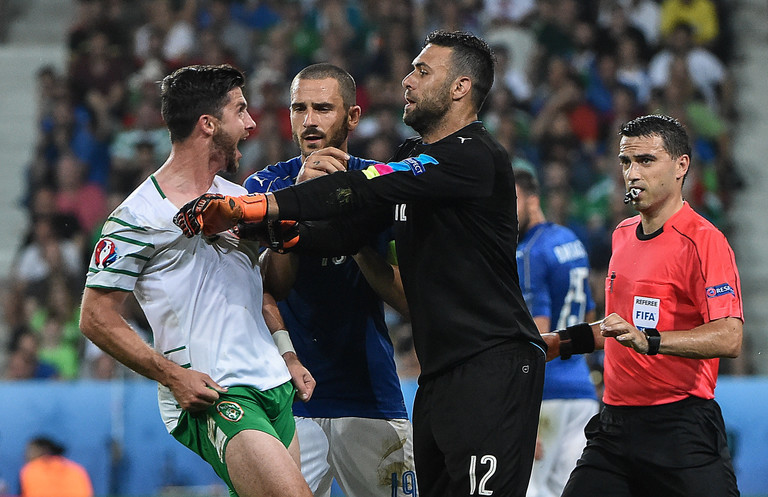 This wasn't Italy at full strength, but it was still a very strong Italian team. Barzagli, Bonucci, Zaza and Sturaro all started, and between them they had made 143 appearances for Italian champions Juventus that season. The rest of Italy's team came from the likes of PSG, Milan, and Roma - Ireland's came from the likes of Norwich, Burnley, and Ipswich.

There has always been something endearing about the Irish wins of the 80s and 90s, when the team clung to an early lead as though their lives depended on it, but this was a rare occasion when the Irish team really went for it.

Referee Ovidiu Hategan from Romania missed two Irish penalty shouts in the first half - perhaps still bitter about Packie Bonner's save from Italia '90. As well as that, Jeff Hendrick was inches away from scoring what would surely have won goal of the tournament in the first half.

There were chances throughout the 90 minutes for Ireland, against the vastly experienced centre-backs of Andrea Barzagli and Leonardo Bonucci. This was a performance that showed desire, that showed courage, and that showed fight - with the image of Shane Long squaring up to Italian keeper Salvatore Sirigu a brilliant representation of that fight.

Most memorably, substitute Wes Hoolahan had what commentator Hamilton rued as "the chance" to win the game, as the clock ticked past 83 minutes. Aiden McGeady dispossessed an Italian defender and, with only Sirigu to beat, Hoolahan hit it straight at the keeper. 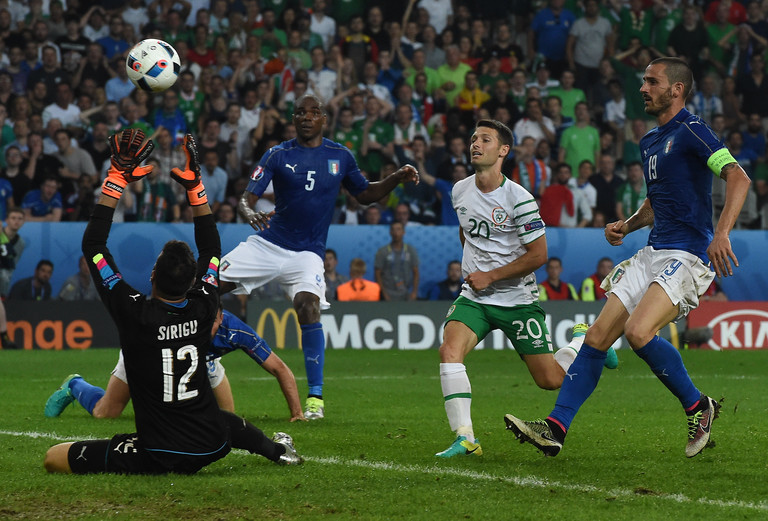 It was a golden opportunity, but Hoolahan atoned for it mere seconds later, with an inch-perfect cross for Brady to nod the ball calmly past Sirigu, and bring us all to our feet.

Brady's goal was a euphoric moment - and it even brought Irish president Michael D Higgins to his feet, in what has become a clip almost as memorable as the goal itself.

Even the legendary clip of Michael D celebrating Robbie Brady's goal in Lille is now tainted by John Delaney and his wildman celebration.

But it won't stop us from wishing Michael D a happy 80th birthday. pic.twitter.com/4eYdFFhEF0

Ireland were through to the last 16 - where they gave eventual finalists France a run for their money in the heat of Lyon. The late nature of the goal, scored just five minutes from the death, only added to the sheer joy of the moment - it really felt as though Ireland had snatched their place in the knockout rounds from the jaws of defeat.

So, just where does Robbie Brady's goal in Lille stand in the history of Irish football? The moments that came before it have become pillars of not just Irish sporting culture, but Irish culture in general. The Van and 'Joxer Goes To Stuttgart' jump out as but two examples of how Jack Charlton's Irish side became part of the Irish lexicon in the 1990s. 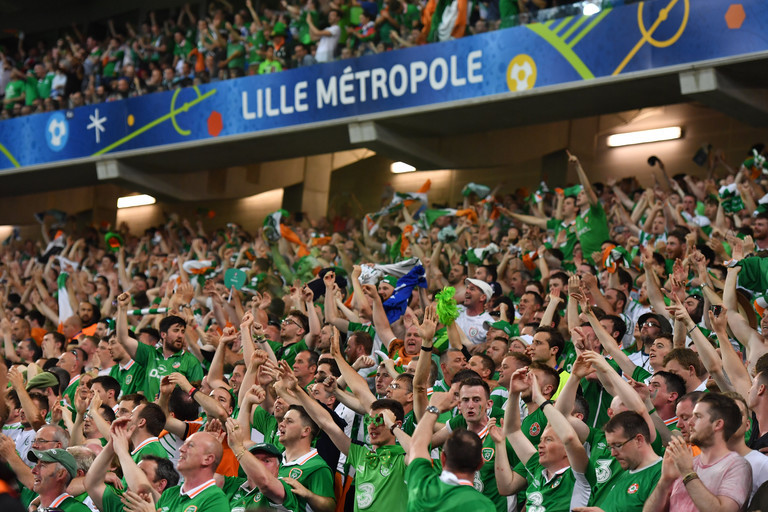 The Irish fans in Lille on June 22 2016. Photo: Stephen McCarthy/Sportsfile

Brady's goal in Lille stands alone in that regard. The management era of Martin O'Neill and Roy Keane petered out in the aftermath of Euro 2016, and the previous Euros campaign in Poland and Ukraine was an unmitigated disaster.

Charlton's Irish side became iconic because of how stubbornly they stayed at the top for so long. Charlton took Ireland to three out of four consecutive tournaments, and reached the knockout stages at successive World Cups.

Perhaps that is where we find the long-term legacy of Robbie Brady's goal against Italy. It was, in all honesty, a moment of time. A glimmer of hope for a new generation of Ireland fans that we could, just maybe, compete on the biggest stage against the biggest teams again.

The five years that followed have brought us crashing down to Earth, but the euphoria of the goal and the celebrations afterwards - for the "Zoomer" generation, at least - matched anything seen during the Charlton era.

And, by God, did Robbie Brady bring us all to our feet in Lille on that June night in 2016. 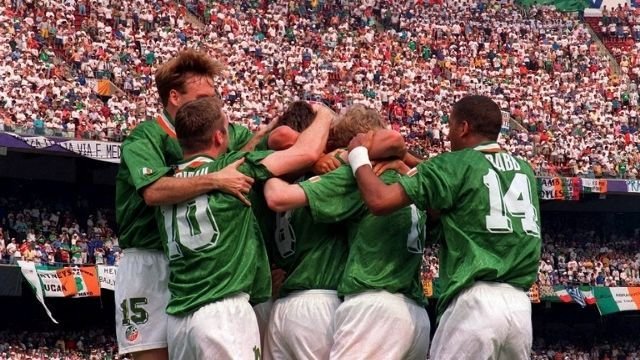 Football
1 year ago
By Balls Team
Watch: Bask In The Commentary From Around The World For That Brady Goal
Football
1 year ago
By Gary Reilly
Watch: Robbie Brady's Post-Match Interview Is The Most Beautiful Thing We've Ever Seen
Football
1 year ago
By Gary Reilly
Antonio Conte's Wonderfully Bitter Post-Match Comments Make It All Even Sweeter
Popular on Balls
GAA
3 days ago
By PJ Browne
Mayo's Padraig O'Hora Using Football To Promote His Real Passion
Rugby
1 day ago
By Colman Stanley
'That Pace, That Intensity, That Organisation' All Black Legend Has High Praise For Leinster
GAA
1 day ago
By PJ Browne
Jim McGuinness's Gut Tells Him Dublin Will Win The All-Ireland
The Rewind
2 days ago
By Eoin Harrington
Watch: Brilliant Dermot Morgan Dublin Segment From 'The Travel Show' Resurfaces