When Johnny Sexton burst onto the scene in 2009 and replaced Ronan O'Gara in the Irish team for the November internationals that year, a new broadcasting tool was quickly invented, the ROGcam. This was a piece of software, initially used by RTE, to make sure that the benched O'Gara was constantly monitored and ready to show to the live viewing audience at the blink of an eye. If Sexton missed a kick, made a kick, made a tackle, passed the ball, or generally moved from standing position, the ROGcam was activated and we were left to study the expressions of the face of the jilted out-half.

Over time, the ROGcam came to be used on Sexton too when the Munster man won his place back on the team. It eventually spread far and wide. Sky Sports took up the patent and placed their ROGcam on Alex Ferguson for the entire David Moyes reign at Manchester United.

Nobody, though, has the mantle quite as well as Spanish broadcasters since Sergio Ramos has been out of the Real Madrid team with various injuries and from contracting Covid over the last few months. Last night, as his team struggled to a 1-1 draw with Chelsea at home in the first leg of the Champions League semi-final, we were treated to the greatest performance yet in the 12 year career of the ROGcam.

Standing alone and masked in the stands of Real Madrid's training complex, and dressed in a dapper, tight fitting t-shirt despite the bucketing rain, Ramos was the focal point for the match director after basically every moment of interest in the game. By quick calculations, it's estimated that Ramos received four and a half times more screen time that all Chelsea players put together over the course of the 90 minutes.

As the game came to an end, and as Madrid looked more and more rudderless, the director stepped up his use of RAMcam until it became quite ridiculous. A late chance from a corner for Raphael Varane was met with particular anger from the captain, who wanted to show his World Cup winning teammate how to head the ball.

On RTE commentary, George Hamilton and Stephen Kelly were getting a little fed up with the constant coverage of Ramos by mid way through the second half, and started to let a couple of digs slip out.

It's fair to say people watching around the world were equally irked and amused by the constant presence on their screen of the Real Madrid, with many erroneously blaming BT Sport for the decisions.

Has Sergio Ramos' Tattoo artist paid for an advertising slot on BT? He's as pervasive as Martin Keowngoal's stupid questions....

Please get Ramos off my screen man

Sergio Ramos made more appearance in my TV than Luca Modric...Lol😂...

I realize Sergio Ramos is great but he’s not playing, the camera doesn’t need to show him 100 times

Take a shot every time they show Sergio Ramos

It is being reported that Ramos will be ready to go for the second leg at Stamford Bridge next week, which will likely mean we'll see a lot less of him then. 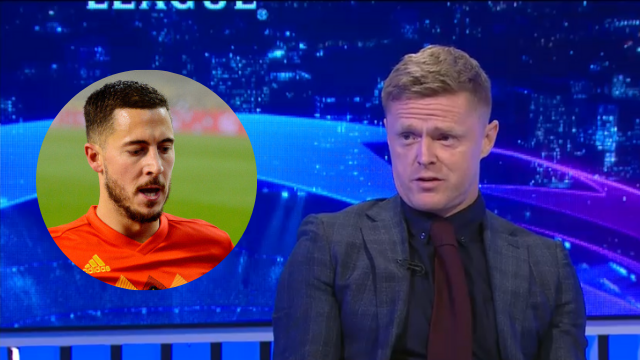