Meet Addison Whelan: The Girl Who Got Ronaldo's Jersey

While the result finished 0-0 at the Aviva last night, it was a triumphant evening for Stephen Kenny and the young Ireland team. A star-studded Portugal team had been nullified. The result felt like another step forward in the evolution of Ireland's football identity under Kenny.

One of the highlights of the night came after the final whistle. A girl ran onto the pitch to embrace Cristiano Ronaldo, and Ronaldo was kind enough to give her his jersey.

It was a wonderful moment.

The girl's name is Addison Whelan. The 11-year-old is a talented footballer and boxer.

She plays football with the Shelbourne U-13 team.

However, it appears that her preferred sport is boxing.

She trains out of the Corinthians Boxing Club in the north east inner city, the same club where Olympic gold medalist Kellie Harrington trains.

Addison featured in this report from Corinthians Boxing Club by the Irish Times last August, after Harrington's gold medal.

You can see her sparring here wearing Ronaldo's Juventus jersey.

She told RTÉ this morning she was "in shock" afterwards.

"There were security guards running behind me and coming from the other corner... I ran towards the halfway line but then they caught me. I was screaming Ronaldo's name"

As Addison said on her own instagram last night, her 'dream finally came true'.

However, she was fined €3,000 for running onto the pitch. She told media members her dad would pay for it.

@FAIreland really ??? A €3000 fine to a KID that got excited ran on to see her idol ??? #FAIireland #Ronaldo #IREVPOR pic.twitter.com/NN7NhDUTJJ

It was a night of optimism for Ireland fans. Speaking in his post match press conference, Kenny said Ireland's style of play is evolving.

"Okay we didn't create loads of clear cut chances and there is room for improvement in our attacking play, but we had more shots on target than they had. It was a good performance."

"It's a new system and style of play and there's an influx of a lot of young players.

"The only match we've lost in nine matches now is the game in Faro in the 97th minute. That was a contentious one and we've been denied tonight by another contentious decision right at the death. We're going very well."

"I'm building a team here. We went through a difficult period which was Covid-inflicted to be fair.

"We had eight players in one camp unavailable and a high number in another camp which was six matches.

"You can see what we're doing. It's a brilliant effort from all of the staff, all of the coaches and the players have been magnificent." 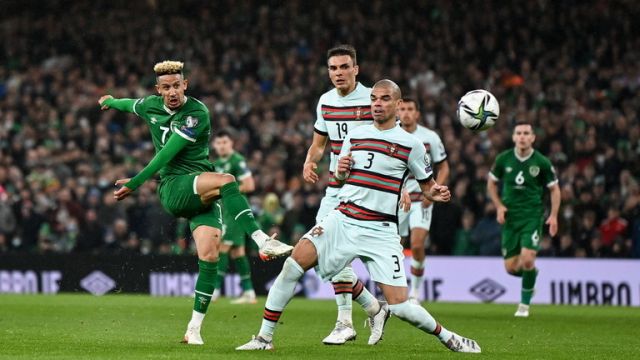