Cristiano Ronaldo's hat-trick secured progression for Juventus on a stunning night of Champions League action as Atlético Madrid bowed out of Europe.

The former Real Madrid star delivered on the big stage yet again with two headers and a penalty at Juventus Stadium. It proved a bitter pill to swallow for the La Liga side, but a stunning comeback that Ronaldo remarkably predicted prior to the game.

"Another hat-trick in the blazing career of Cristiano Ronaldo!"

As reported by IOL.com prior to the tie, Ronaldo had called on the Old Lady faithful to believe: "These are the great nights, the fantastic ones: the Champions League nights. The team is confident of playing a great game, and I am too. To the fans I say: think positive, let’s believe."

Spanish outfit Marca even reported that the Portuguese striker predicted his own hat-trick. 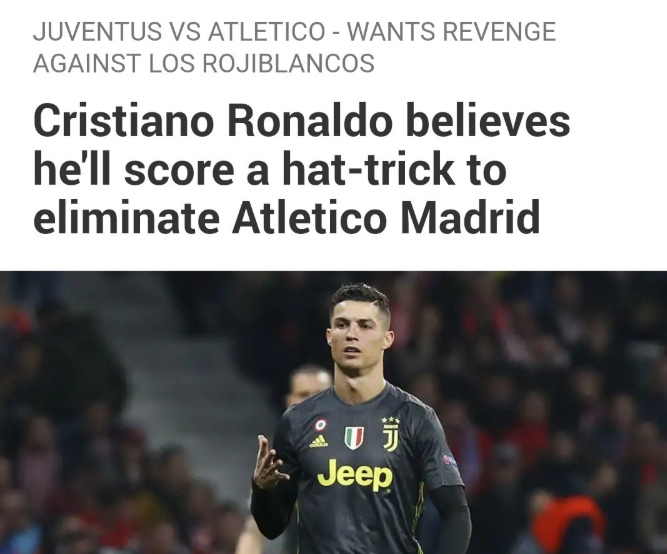 It is also the third time Ronaldo has scored a hat-trick against Jan Oblak and ensures the Seria A champions march on to the final eight in what is increasingly looking like a blockbuster quarter-final stage.

It finished 3-2 on aggregate.

SEE ALSO: James McClean Hits Out At 'Hypocritical And Stupid' English FA For Lack Of Action

Football
1 month ago
By Emmet Bradshaw
Five Serie A Fixtures Postponed Due To Coronavirus
Football
3 months ago
By Maurice Brosnan
Report: Juventus Ready To Pounce With Four Free Signing Targets Lined Up
Football
6 months ago
By Gary Connaughton
Cristiano Ronaldo Is Officially The Second-Worst Free-Kick Taker In Serie A History
Popular on Balls
The Rewind
19 hours ago
By Gary Connaughton
Houseparty Deny Claims App Has Been Used To Hack Users' Data
5