The Worst Transfer Story Ever: Ronaldo To Kenny Dalglish's Rangers

While the vast majority of football fans will agree that transfer stories can get absolutely insufferable during the summer months, and the weeks before the January transfer window, and most of the time in between, a blast from the past should provide some perspective as to how bad things used to be.

Most of us have a memory of being duped by a misleading report or a dodgy headline in our youth, for this writer it was coming home from a day playing football and flicking on Teletext to catch up on the news only to see 'MAN UNITED CONFIRM RONALDO SIGNING', something that made my young heart skip a beat as Cristiano was not yet an established household name.

But to go even further back, to November 1996 to be precise, we've recently been alerted to a piece in the Daily Record that, looking back, might just be the worst transfer story ever written.

Rangers had come into some cash, and it was clear that the club would have money to spend, but following their elimination from the Champions League, one writer was clearly trying to get some optimism back amongst the fans as he got extremely carried away due to a quote from a football agent from Edinburgh.

First, he decided that Kenny Dalglish would be hired as manager, despite how harsh that would have been on Walter Smith who would go on to win the league that year. He then, knowing that a ridiculous quote claiming Ronaldo was within reach was not enough for a piece, decided to list every big player in European football that he could think of. 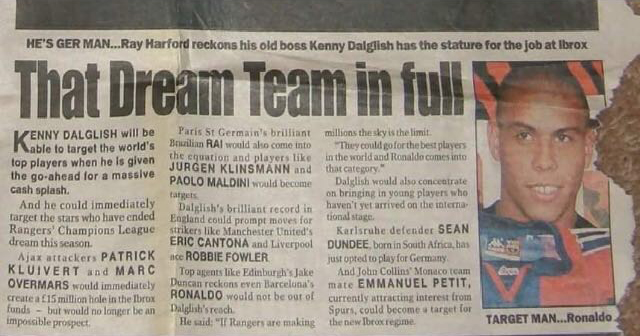 Kenny Dalglish will be able to target the world's top players when he is given the go-ahead for a massive cash splash.

And he could immediately target the stars who have ended Rangers' Champions League dream this season. Ajax attackers Patrick Kluivert and Marc Overmars would immediately create a £15m hole in in the Ibrox funds - but would no longer be an impossible prospect.

Top agents like Edinburgh's Jake Duncan reckons even Barcelona's Ronaldo would not be out of Dalglish's reach. He said: "If Rangers are making millions the sky is the limit. They could go for the best players in the world and Ronaldo comes into that category."

Dalglish would also concentrate on bringing in young players who haven't yet arrived on the international stage. Karlsruhe defender Sean Dundee, born in South Africa, has just opted to play for Germany. And John Collin's Monaco teammate Emmanuel Petit, currently attracting interest from Spurs, could become a target for the new Ibrox regime.

The referral to Emmanuel Petit, who would go on to become an Arsenal legend, as a Spurs target is the cherry on top.

While Scottish football in the 90s was a very different beast to what it is today as a league that genuinely could attract good players from around Europe... The idea that Ronaldo and Paulo Maldini would be swapping Barcelona and Milan for Glasgow was plucked directly from the arse of whoever was behind it.

Rather than those eye-catching names, Rangers signed the likes of Sebastian Rozental, Lorenzo Amoruso, Marco Negri, Tony Vidmar, and Antti Niemi with their inflated funds over the next year, as well as securing the free transfer of a feisty little Italian by the name of Gennaro Gattuso.

Sean Dundee would be snapped up by Liverpool where he played three times before returning to Germany and fading into obscurity.

Celtic won the league the following season in 1997/98, and when it was time for Walter Smith to move on, it was Dick Advocaat brought in to replace him, rather than Dalglish, who's only spell as a gaffer in Scotland game when he took charge of... You guessed it, Celtic, in 2000.

[H/T to Niall Lewis for sending the article our way]

Football
3 weeks ago
By Sean Meehan
Remembering The Wonderful Scrap Between Rino Gattuso And Joe Jordan
Football
3 weeks ago
By Balls Team
Here's The Last Irish Football International From Every County In The Country
Irish Life
3 weeks ago
By Balls Team
12 Of The Greatest Pieces Of Commentary In Irish Sport
Popular on Balls
GAA
2 days ago
By PJ Browne
Insane Drama As Late TJ Reid Goal Sends Ballyhale Into All-Ireland Final
Rugby
1 day ago
By Colman Stanley
Yesterday Was Not The First Time Wayne Barnes Sent A Player Off For Getting Lippy
Rugby
23 hours ago
By Colman Stanley
Champions Cup Predictions And Permutations For The Irish Provinces
The Rewind
2 days ago
By Jonathan Byrne
The Definitive Ranking: Deli Items Ranked From Best To Worst