After the Football Association of Oman confirmed that they were otherwise engaged on the final week of March 2017, the FAI were forced to cast their eyes around the football world - the international football family, if you will - and ultimately opted to stage a friendly match with Iceland, which will take place in the Aviva tonight.

On the surface, this shapes up to be an exciting encounter and would seem to be a worthwhile enterprise. Mere days after 52% of the UK electorate gave a loud sayonara to the rest of the European Union, Iceland delighted the vast majority of inhabitants of the planet by dumping them out of Euro 2016.

Where once we might have thought them minnows, or semi-minnows at best, now they are worthy and highly challenging opponents. We'd say there's no shame in losing to them but won't out of fear that Danny Baker might stumble upon this humble post and embark on a tirade again.

But we are anxious. Anyone who thinks playing Iceland in football spells good news for Irish football has forgotten their history. Whenever the Ireland football team has engaged with Iceland in the past, it has brought us nothing but trouble. They have a habit of showing up whenever there's dissension in our camp.

Who remembers the Icelandic Triangular Tournament in 1986, our first trophy in international football? Notwithstanding its status as our first ever trophy in senior football, it is true to say the nation has failed to cherish the prize.

Big Jack had only managed Ireland in two matches before they jetted out to Iceland. He hadn't even gotten around to discarding the League of Ireland lads. Pat Byrne came on for Chris Hughton at half-time against Iceland.

However, the trouble started before the tournament began. Our smooth centre-half David O'Leary had booked a family holiday. The prospect of playing in front of 4,000 spectators in Reykjavik wasn't sufficiently alluring to persuade him to cancel the holiday.

Big Jack got the hump and told him he could forget about international football unless he showed up. O'Leary didn't warm to Jackie's blackmail and told him to shove it.

David O'Leary was blacklisted by the House of Anti-Big Jack Activities. He hardly kicked a ball until Genoa. Happily, the ball he kicked there was a rather important one.

But that wasn't even the most historically contentious Ireland-Iceland match. A decade later, Mick McCarthy had only gotten his feet under the desk as Ireland manager. For the France '98 campaign, he had to manage the transition between one generation of players (those that he played with) and another younger generation.

The group, loaded down with unfashionable eastern European teams, was hardly intimidating. But faith in the team was not what it had been.

Mick McCarthy got no sort of honeymoon in the Ireland job. Straight away, he presided over six straight friendly losses. It was a bleak time and the fear was we'd have to get used to this new reality.

Roy Keane played in the opener against Russia. Ireland slumped to a 2-0 loss and Keane was red carded near the end for a taking a frustrated hack at a Russian winger.

He skipped the rest of the friendlies that summer. He gave the US Cup a miss and nor did he feature in the opening two qualifying matches.

Contentiously, he don't tell McCarthy in advance that he wasn't bothering with the US Cup. He said later on, in an interview with Paul Kimmage, that he tried to contact him but admitted he probably didn't try hard enough. Man United had won the Double and Keane said that he couldn't hack travelling around the world to play in a tournament he didn't respect.

For the tabloid press, he was the Stephen Ireland of 1996. Prior to Iceland, Keane had played four out of 22 games for Ireland. Unsurprisingly, the word went out that he cared about playing for Man United more than Ireland.

In future years, Cathal Dervan would be pegged as the ringleader of the anti-Roy Keane pack. Before the Iceland game, he urged the Lansdowne Road crowd to let Keane know what they thought of his absence.

The crowd acquiesced. Keane's first few touches were greeted boos from around the ground.

Tony O'Donoghue was writing for the then Cork Examiner in 1996. Without naming anyone, he laid into the tabloid media for whipping up hostility towards Keane.

I told my journalistic colleagues before the game that if Keane got a hostile reception they should bear much of the responsibility for that and at least have the decency to be ashamed.

It was no less shocking when he was booed. It was the saddest sound in Irish sport.

Keane was the best player by a country mile during a depressing 90 minutes for Irish football against Iceland. That 0-0 draw could yet do us untold damage and hinder our World Cup qualification hopes....

The boo boys didn't quite have the stamina. Their energy was sapped by the stultifying nature of the fare on offer. Keane, deployed at centre half to fill a gap (he played there for Man United on occasion the previous season), emerged as Ireland's most impressive performer.

Iceland were stubborn and held Ireland out. The crowd of 33,000 didn't have much to work with and created little noise.

But in the dying embers of the game, a salute of 'Keano, Keano' went up. As John Lee in the Irish Independent wrote:

In the end, he gradually won over the fans and the only chant heard from the crowd as the match headed for a dull and disappointing 0-0 draw was 'Keano, Keano'

Noel Dunne, also in the Indo, said that the press corps were big enough to overlook their differences with Keane in awarding him Man of the Match.

The announcement came over the PA that the print media, which does include a fair number of our knowledgeable cross-channel colleagues, plus a section of the Irish contingent which is hated, or at least disliked, by the man in question, had voted Roy Keane the Man of the Match.

Five years ago, in 2012, in a Q & A on the Football Writers Association website, Cathal Dervan said that falling out with Keane was his biggest mistake.

Falling out with Roy Keane at a time when I thought it was clever to be opinionated and loud. I’m still opinionated but just glad I had the chance to make amends with Roy, with the help of Sunderland press guru Louise Wanshaw, a couple of years back in Portugal.

Ten months later, Keane scored twice as Ireland eked out a vital 4-2 win in Reykjavik, a match which is now notorious among more Republican-minded fans.

In the grip of post-Diana hysteria, the Irish team wore black armbands. The match took place six days after the fatal car crash in Paris. It was Mick McCarthy's call.

Princess Diana wasn't just a British celebrity - she belonged to the world. I think it is fitting that we should now join in the respect being paid to her by people all over the world.

Those irritated by the gesture have often noted bitterly that Ireland played Mexico only six days after the Loughlinisland massacre, when Irish supporters in Down were gunned down by the UVF while watching Ireland's victory over Italy in the Giants Stadium. 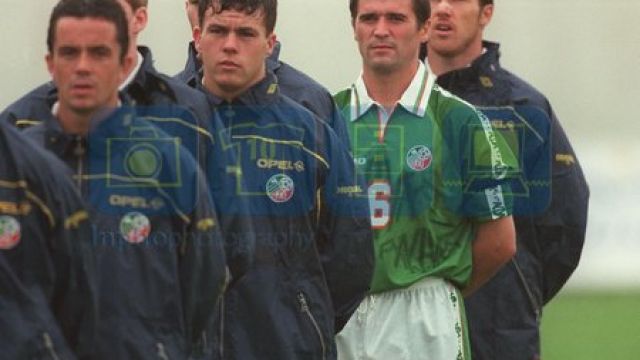 Yet black armbands were not part of the Irish kit for the Mexico game in Orlando. In defence of Big Jack and others, atrocities were sadly a regular occurrence until the autumn of 1994 and it wasn't common practice for the Irish team to don black armbands in their aftermath.

Seventeen years later, the Irish team did mark the tragedy by wearing armbands for a friendly against Italy in Liege. The FAI first secured permission for the gesture from UEFA.

Football
2 weeks ago
By Emmet Bradshaw
8 Times When Football Commentators Got Lost In The Moment
Football
2 years ago
By Ste McGovern
The Tastiest World Cup Fixtures You Need To Arrange Your Life Around In The Group Stage
Football
2 years ago
By Eoin Lyons
Grim Scenes As Famous Icelandic Chant Trademarked
Popular on Balls
Football
21 hours ago
By Balls Team
The Irish Unfulfilled Potential XI
Rugby
23 hours ago
By Gary Connaughton
Watch: Craig Casey's Debut Initiation Song Choice Was Sensational
Football
23 hours ago
By Gary Connaughton
Watch: Roy Keane & Jamie Redknapp Get Into Heated Argument Over Spurs Squad