Manchester United fans have been swept up in the romance of Cristiano Ronaldo returning to the team in recent days, with the move universally popular amongst the club's support base.

They have long craved to see the Portuguese superstar pull on the red shirt today, although it's fair to say that the move has come a few years later than they would have hoped.

Despite being 36-years old, Ronaldo will still bring a huge amount of quality to the side. Whether it will be enough to make the club true contenders in the Premier League and Champions League remains to be seen.

United's main issues over the last couple of seasons were not in forward areas, meaning Cristiano Ronaldo may not be the solution to their problems. The quality and consistency of their goalkeepers remains a big question, while the midfield is well short on quality.

Roy Keane believes that this could still be their undoing.

Speaking on Sky Sports this afternoon, the Irishman said that despite being a fan of the signing, he does not believe that Cristiano Ronaldo's arrival will make the difference in Manchester United winning the biggest honours in the game.

🗣"He's coming back to man united to win stuff."

Roy Keane has been swept along with the great news of Cristiano Ronaldo coming back to Manchester United pic.twitter.com/HdqjYzqtSd

It's been great. The last few days when the news broke, it was great news for United, for the fans, for the Premier League.

There's no doubt in my mind that he's still a world class player. We can discuss the plusses and minuses of it, people might have doubts if the hunger and desire is there. It's certainly not a pay day for him, the guy is worth fortunes.

We saw in the Euros that he won the golden boot, the World Cup is a year-and-a-half away and he will have that incentive to keep going.

He is a clever guy. He is only coming back to Man United to win stuff.

My doubts are I don't think he will be the difference in winning the big trophies, but to win an FA Cup or League Cup is more than possible...

He will bring a winning mentality to the dressing room, he is a fitness freak. We all know his game has changed over the last few years.

I've said it before, I think he is one of the most intelligent players I have seen in my life, the way he adapted his game.

He is a winner and is coming back to Manchester United to win stuff, but United still have the same problems with or without Ronaldo. That's midfield and goalkeeping problems...

I see a lot of plusses. But the bigger picture, I don't think it means for one second that Man United are all of a sudden going to be winning the league title.

Ronaldo will be a huge presence in the club over the next couple of seasons, with his winning mentality something that is almost unmatched in the world of sport.

It remains to be seen if this can rub off on the other players in the dressing room, some of whom have been accused of some severe mental frailties in the past.

SEE ALSO: Rio Ferdinand Reveals His Role In Getting Cristiano Ronaldo To United 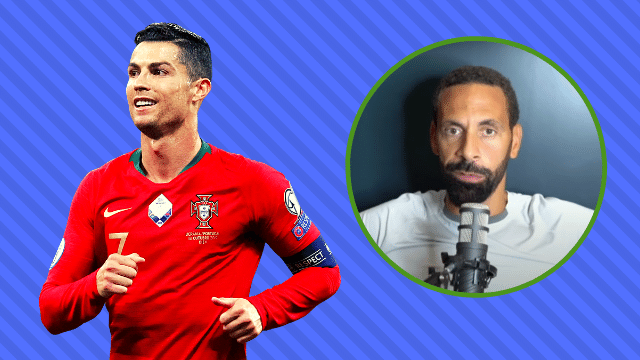 Football
5 days ago
By Gary Connaughton
Watch: Roy Keane & Jamie Carragher Have Huge Fight Over Cristiano Ronaldo
Football
3 weeks ago
By Eoin Harrington
Against The Toughest Of Opposition, Duffy And Coleman Shone In Dublin On Thursday Night
Football
3 weeks ago
By Donny Mahoney
Meet Addison Whelan: The Girl Who Got Ronaldo's Jersey
Previous Next

Football
5 days ago
By Gary Connaughton
Watch: Roy Keane & Jamie Carragher Have Huge Fight Over Cristiano Ronaldo
Football
3 weeks ago
By Eoin Harrington
Against The Toughest Of Opposition, Duffy And Coleman Shone In Dublin On Thursday Night
Football
3 weeks ago
By Donny Mahoney
Meet Addison Whelan: The Girl Who Got Ronaldo's Jersey
Popular on Balls
Football
3 days ago
By Colman Stanley
Alex Ferguson Names His Greatest Captain, And It's Not His Most Successful Captain
Rugby
3 days ago
By PJ Browne
Trevor Brennan's Sons Played In The Same Top 14 Game At The Weekend
Football
1 day ago
By Gary Connaughton
Frank Lampard Reveals Ruthless Nature Of His Sacking At Chelsea
The Rewind
2 days ago
By Colman Stanley
New On Netflix Ireland: Your Guide To December's New Additions