Well, that was a bit of alright.

Liverpool would ultimately run out 4-2 winners, and while it was a bit nervy at times, they certainly deserved the three points in the end.

Ole Gunner Solskjaer will be ruing some bad mistakes by his team, especially early in the second half. Fred in particular had a very poor game, continually giving the ball away. One of those stray passes resulted in Liverpool's third goal, with the player soon substituted after also picking up a yellow card.

Speaking on Sky Sports after the game, Roy Keane was withering in his assessment on the Brazilian:

I know Ole perseveres with Fred, but I can't see it. If they think Fred is going to get Manchester United back to winning titles, it is beyond me.

I know he has dragged him off. It's sloppy, it's lazy (his passing). He's made a mistake (for the third Liverpool goal) and he's hoping his mates would get him out of trouble. Shaw as well, it's schoolboy stuff...

Maguire is a loss, but this is schoolboy stuff. Fred is under no pressure and gives it away and Shaw is an experienced international...

I think the fact they took Fred off was a bigger help.

Roy Keane said he is unsure if he is the long-term answer for United between the posts.

He looked tiny there for the fourth goal...

They can't go back to De Gea, I don't think that's the final answer either. He is going to make mistakes of course, but my worry is his presence.

He looks so small, which is a big concern going forward.

Liverpool have now given themselves a real chance of securing an unlikely top four finish. A win in each of their final three league fixtures would likely be enough to guarantee Champions League football next season. 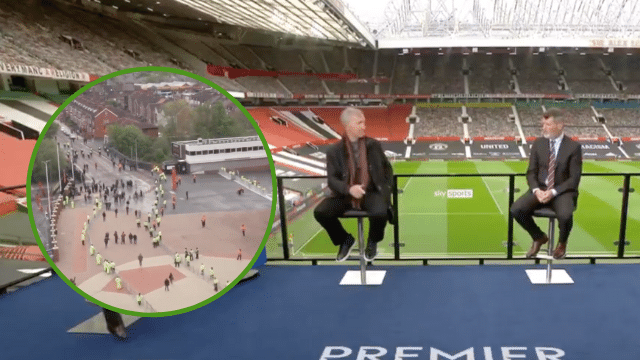