Roy Keane has gone on record multiple times this season to criticise Man United's midfield. The Corkman thinks West Ham midfielder Declan Rice could be a solution to their issues.

Keane appeared on Sky Sports as part of their pre-match build-up to Man United's dramatic late win over West Ham, and he thinks the Hammers captain could make United an even better prospect.

Declan Rice has been one of West Ham's main men for the past two seasons, and he and West Ham nearly came away from the game with Man United on Sunday with a point, before being denied by a late David de Gea penalty save.

Roy Keane has criticised Man United's midfielders - particularly Fred - on multiple occasions this season. Despite the 2-1 win for the Reds, Scott McTominay and Fred were underwhelming in midfield. Keane thinks Rice may present the solution to Ole Gunnar Solskjaer's issues.

Roy Keane gives Declan Rice some big praise when asked if he would improve the Man United midfield pic.twitter.com/oFo5sQzsfU

"I think he would improve the United midfield," said Keane.

I think Declan's improved as much as any player over the last one or two seasons that I've been looking at him.

I know he's been linked with United. If you'd have asked me a year or two ago I would have said "no, I'll give him another year or two" - in terms of maturing.

I think the next step will come from him when he's playing at a higher level. When I say 'at a higher level' I mean for Man United, Champions League, competing for trophies. He's obviously a regular for England. The big pluses for him - there's a lot more to come from him.

I know what Graeme (Souness) is talking about, that forward passing, that bit of cuteness - I think that would come from playing in bigger games. He's always available, he plays the games, that's a big plus, he's a big presence out there.

I'm not a big fan of the United midfield so we'll see what he does against them out there today.

Rice was part of the England team that reached the EURO 2020 final against Italy, starting every game as they came close to a first trophy in over half a century.

Despite Keane's praise for the England midfielder pre-game, he reserved some harsh words for him at full-time. West Ham manager David Moyes substituted on Mark Noble to take the 95th minute penalty - which he ultimately missed. Keane thought that senior players such as Rice who were already on the field should have stepped forward.

People say, 'well, he's taken penalties before, he's experienced' - I don't care. There must be players on the pitch who are up to speed with the game - Rice, Cresswell, whoever is on the pitch, experienced players to slot the ball home.

Man United have been linked with Declan Rice ad nauseam for the last year or two - and if praise from the likes of Roy Keane continues, it's unlikely those rumours will stop any time soon. 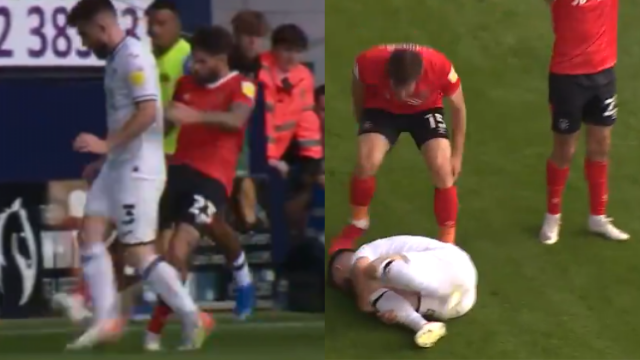