At 18 years of age, Birmingham City might have been right to retire Jude Bellingham's jersey. He's got star potential and now has Roy Keane rooting for him.

The Corkman might be known to dish out plenty of his criticism in his punditry spells but he didn't hold back in his praising of Bellingham.

On Monday night, England carried out a complete whitewash of San Marino in a 10-0 win and the Dortmund midfielder was instrumental in their performance.

People might not look too much into the efforts against such lacklustre opposition. However, there were positives to take from the match.

🗣"It's really special, with a really talented group of lads and hopefully we can do something special. It would be a dream come true to play in a World Cup."

Jude Bellingham feels very special being part of the England squad and very happy for qualifying for the World Cup pic.twitter.com/1WuK6YBaM0

The win saw England top Group I ahead of Poland, who were hot in their heels earlier in the campaign. They put twelve past San Marino over two games.

The rise of Bellingham is one of many narratives coming out of the game. Harry Kane's four goals is nice padding for his international goals record.

After the game, Roy Keane and Ian Wright were on punditry duties in the ITV studio and they couldn't hold back in their admiration for 18-year-old Bellingham.

"We love everything about him," Keane said. "What he's doing on the pitch, the way he speaks off it. He's playing week-in week-out for a top club. The potential for this kid, it's scary."

"As long as he can keep himself right and keep himself fit, you have to say in a years time he's probably a starter for England."

At that point, Keane interjected to convey some more positive thoughts on the youngster. "I saw him recently playing for Dortmund in a Champions League game."

"He was producing passes and I was even like, I didn't think he had that in his locker quite yet. And we're not seeing him week-in week-out."

Keane continued. "The potential for this boy, and he's a good size, he looks like a footballer. He looks like a boxer. He's a strong, powerful boy."

Bellingham has cemented himself as a starter for Borussia Dortmund in the Bundesliga this season. Marco Rose has started him in all eleven of Dortmund's games.

He has two goals and three assists so far, including another hat-trick of assists playing for Dortmund in the Champions League. 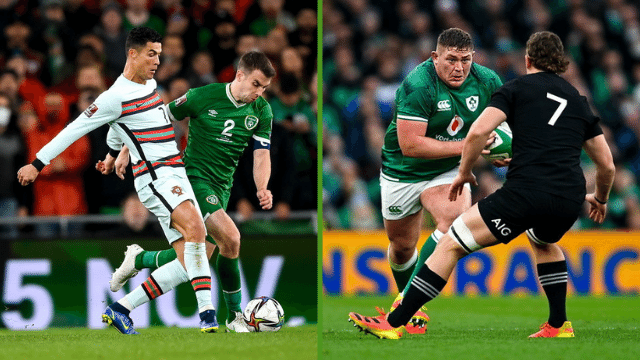 Football
1 week ago
By Eoin Harrington
How To Get ITV In Ireland For The FA Cup Final
Football
1 month ago
By PJ Browne
Roy Keane Lambastes Exuberant Ireland Celebrations Vs Lithuania
Football
2 months ago
By Eoin Harrington
"Very Childish": Roy Keane And Ian Wright Hilariously Disagree On 'This Is Anfield' Sign
Popular on Balls
Football
3 hours ago
By Eoin Harrington
Juan Mata Questions Manchester United Management After Dire Season
Golf
2 days ago
By Gary Connaughton
Padraig Harrington Glad He Didn't Have To 'Make A Decision' On Saudi Golf League
Football
1 day ago
By Gary Connaughton
The Frank Lampard Love-In After Everton's Survival Was Downright Bizarre
GAA
2 days ago
By PJ Browne
'It Came At An Awkward Time. I Didn't Think It Would Be So Bad'