Speaking in UCC two years ago, Roy Keane urged young players not to be disdainful of the League of Ireland. He highlighted his own fruitful experiences with Cobh Ramblers in the 1989-90 season.

Or 'Cobh Rovers', as English commentators were wrong to call them when trying to provide a bit of background on Roy during his Nottingham Forest days.

Keane's relationship with the FAI was never a cloudless one. Not from the earliest of days. In the Eamon Dunphy ghosted autobiography, he was at pains to get across his resentment at the FAI's alleged favouritism towards Dublin lads in schoolboy selections.

Before Roy had even played a game of senior football, he was fined by the association. He had signed for two clubs.

Before the 1989-90 season began, he had agreed to sign for Cork City. He signed the papers upstairs in the La Chateau pub.

But Cobh (a Division below Cork) offered him a chance on a FAS course in which he would be able to train like a professional for a year. There was only spot available per club and Cork City had already handed that spot to another young player and a friend of Keane's, Len Downey.

Cobh swooped and Keane snapped up the spot on the FAS course, which took place in Palmerstown in Dublin. Keane spent the season living in digs in Leixlip from Monday to Friday.

These days, with relations much more cordial between Roy and the FAI, Keane says he has no issue with the fine.

I got charged. The FAI charged me. That was probably the start of things to come (crowd laughter). Rightly so, because I signed for two clubs and you're not supposed to. I remember they fined me £100. Cobh paid it, to be fair to them.

I think Cork City were looking for money in a tribunal. I think they were after £16,000, which was a small bloody fortune back then.

Cobh Ramblers endured a difficult 1989-90 season having been relegated from the top flight the year before. They would finish a lowly seventh in the Second Division after suffering an appalling start to the season.

Here are some press cuttings of games Roy played for Cobh in Kilkenny, Longford, Ballybofey and St. Colman's Park.

Buckley Park in Kilkenny holds the honour of being the site of Roy Keane's debut in senior football. Contemporary accounts marked the date down as the first step in the revival of football - in Kilkenny, that is.

The only impact Keane made in the estimation of the Kilkenny People reporter was shooting over the crossbar on 33 minutes. 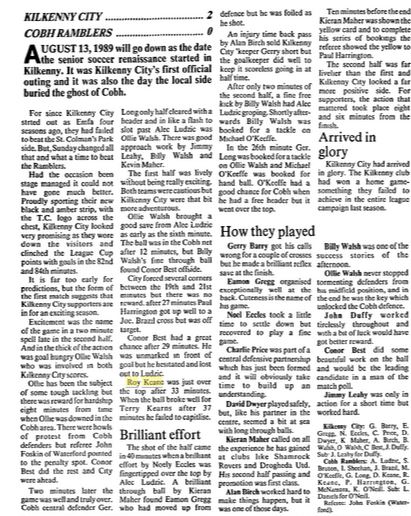 Keane had a particularly eventful game at Abbeycartron on St. Stephen's Day, 1989 against Longford Town. He set up Denis Keane's goal, hit the crossbar with a header and almost scored a wonderful goal in injury time. Report in the Longford Leader. 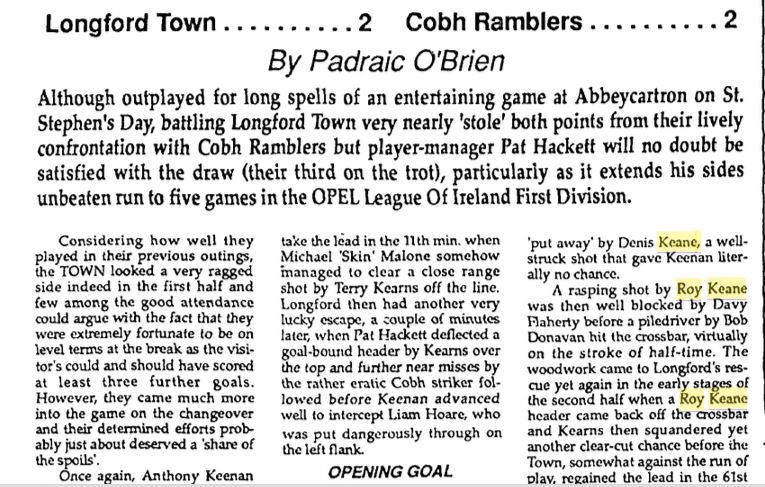 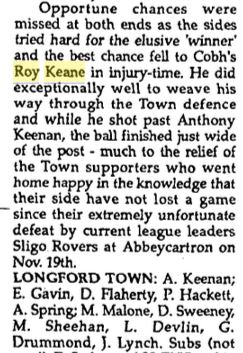 According to a thread on Keane's Cobh career on Foot.ie, Roy arrived in Ballybofey for this game against Finn Harps on 28 January 1990 with five minutes left to kick-off. He had been playing a youths game in Dublin. This is a report from the Donegal News (3 Feb, 1990) 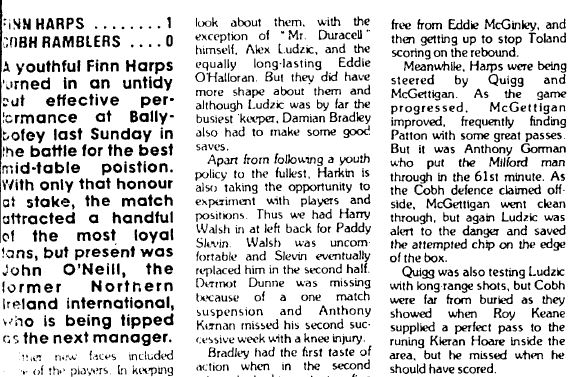 Roy's penultimate game for Cobh saw him score in the FAI Cup against St. Francis. However, Cobh were held to a 2-2 draw and then got spanked 3-0 in the replay three days later, Roy's final game in domestic club football. 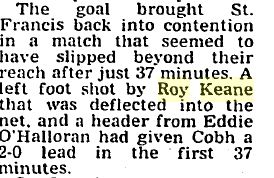 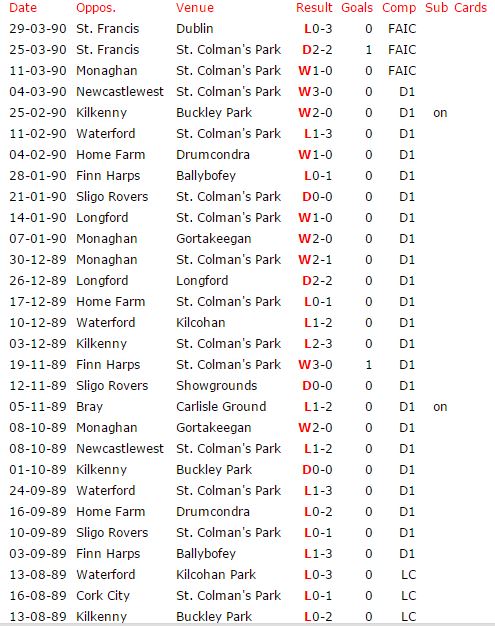 Read more: How The Greatest Irish Team Never To Qualify Were Robbed

Football
1 year ago
By Sean Meehan
Each Current League Of Ireland Club's Best Jersey From This Century
Football
2 years ago
By Gary Connaughton
Cobh Ramblers Contact FAI After Irregular Betting Patterns On Limerick Game
Football
3 years ago
By Maurice Brosnan
League Of Ireland Club Furious After Bus Fiasco As First Division Begins
Popular on Balls
GAA
3 days ago
By PJ Browne
Mayo's Padraig O'Hora Using Football To Promote His Real Passion
Rugby
1 day ago
By Colman Stanley
'That Pace, That Intensity, That Organisation' All Black Legend Has High Praise For Leinster
GAA
1 day ago
By PJ Browne
Jim McGuinness's Gut Tells Him Dublin Will Win The All-Ireland
The Rewind
2 days ago
By Eoin Harrington
Watch: Brilliant Dermot Morgan Dublin Segment From 'The Travel Show' Resurfaces