The Strangest Figures To Do Football Punditry For RTE

The cynical among you will wryly remark that RTE have rarely put too much emphasis on expertise in their soccer punditry - Eamon Dunphy literally made up an Argentina player called Lorenzo at the 2014 World Cup - so it is unsurprising that they have been unafraid to cast the net wide in search for guests.

The most recent came at the 2014 World Cup, with Kerry's Colm Cooper sitting alongside Richie Sadlier and Tony O'Donoghue for an afternoon highlights show during the knockout stages. Cooper didn't play that summer owing to a cruciate knee ligament injury, and therefore sat in to review the best of the action from Costa Rica/Greece and Holland/Mexico.

Sadly, we couldn't find too many Mary Hannigan-style recaps of Gooch's appearance, so the only extant reviews come in the form of the humble Twitter Reaction. Some were complimentary, more were critical, while most just expressed their bewilderment.

Thankfully, there is some much more surviving material on Bertie Ahern's infamous appearance on RTE's Premiership highlights show in September 2001. Ahern is a big Manchester United fan, presumably spending his youth, adolescence and much of his adult life fretting and fawning over United when he could have been doing other things like, say, opening a bank account.

Nonetheless, Ahern joined John Giles and anchor Eamon Dunphy in Montrose to reflect on United's 4-1 win against Everton, Arsenal's 1-1 draw with Chelsea at Stamford Bridge and, most gleefully, Liverpool's 3-1 loss to Aston Villa.

On United, Ahern lamented the loss of Jaap Stam to Lazio but cooed about the qualities of the Nevilles, Wes Brown and Mikel Silvestre. (The latter a "good but not a great player" came one Dunphy interruption).

Jimmy-Floyd Hasselbaink was sent off for Chelsea for supposedly elbowing Martin Keown, which led to the surreal incident of Dunphy turning toward Ahern at the end of the slow-motion replay to ask, "Taoiseach, is that a sending off offence?"

He was at his most gleeful in writing Liverpool's title epitaph:

You know, you can only lose between four and six matches if you're going to win the Premiership, am, and that's two down after three matches.

A review in the Irish Independent thought Ahern's appearance was less to do with a genuine, heartfelt grá of one of Ireland's national sports (supporting United or Liverpool) but instead a bit of political PR. "Obviously, a general election is on the way sooner than we expected and Bertie is doing his damdest to dispel the perception that he presides over perhaps the most arrogant, aloof and uncaring government this country has ever seen".

Bethan Kilfoil interviewed Ahern outside of RTE for a slot on the news that evening, in which he said he wouldn't be going into punditry for "at least another decade".

Before Bertie, however, RTE unearthed arguably their finest ever soccer pundit in the broadcaster's early stages.

Patrick Kavanagh was a delightfully dyspeptic columnist on a wide range of topics in the RTE Guide, with one peevish dispatch memorably dismissing the Beatles: "So far the Irish have not produced a guitaring ensemble of sufficiently outrageous codology. I saw the Clancy Brothers on the television and somehow they hadn’t that final touch of nerve and neck which is required".

In the summer of '66, it fell to him to preview the World Cup in England, and showed the kind of powers of prediction that would become de rigueur at RTE, declaiming England as not having a chance.

Looking in at the World Cup on the television reminded me as an old Gaelic man of the uselessness of The Ban. When I was captain and secretary of our club I used to go see Dundalk soccer team play. I was one of a group who paid no entrance money. Our vantage place was on top of a wall on one side of the entrance, and we got on the wall over the saddles of our bikes.

So it was that from this experience I introduced the "triangular movement" to our side. Still we had no great success, for the team was addicted to the old ways of "mark your man".

I was quite a dictator when I was in control. I remember once a player having come late on the field I ordered him to the sideline, "and I'd send you to the sideline if it was a mile away", says I.

they do that in these days of high-powered soccer. The Swiss team boss dropped two players who weren't in in time for bed. This modern soccer as played by the Europeans and South Americans is almost a bore because of its professionalism. The clumsy English who invented the game are still in the tradition of the back streets of Leeds and Sunderland. When it was a poor man's game, out they came with their favours and their rattles. These days players are kissed on the cheeks. And the nine points of the law of current soccer are the old one: possession.

Several young lads in a house where I've been staying have been discussing the games, and on the most intimate terms with names like someone I seem to remember as Lin Tin Tin of North Korea. Of course Yashin, the Russian goalkeeper, is known to all. Then there are Pele and Eusebio, both black. Eusebio is, no doubt, named after a character in my own novel, "Tarry Flynn", Eusebio Cassidy. Eusebio is the Portuguese for Church Father, Eusebius.

I must say I agree with most eyewitnesses that England haven't a chance.

But these young lads whom I referred to were lamenting the absence of a concerted Irish attack on World Soccer, and they were compiling a team that would bate the lard out of Brazil.

"Pele would run like a hare to get out of the way of John Timmons", one chap said.

And they wonder why the Gaelic, Rugby and Soccer authorities in Ireland couldn't get together and organise a team of all the talents.

When I was visiting Rome in 1950 I observed and recorded the tremendous enthusiasm for soccer that was beginning there. Young lads kicking and heading a football in the shade of the Sant Angelo castle. And I may as well give myself another clap on the back I also noted the same time on a visit to the sunny land of Spain that soccer was the national sport of Spain, and that bullfighting was strictly for the birds, tourists I mean.

SEE ALSO: Ranking Every Taoiseach In Order Of Their Ability To Piggyback On Irish Sporting Success 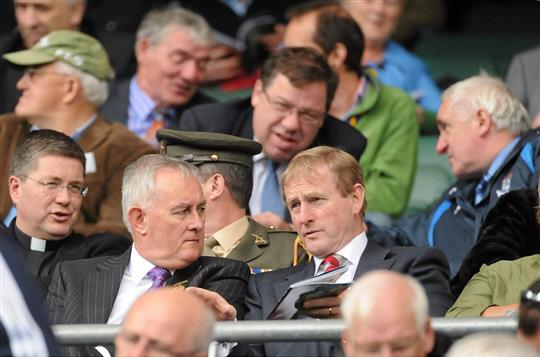